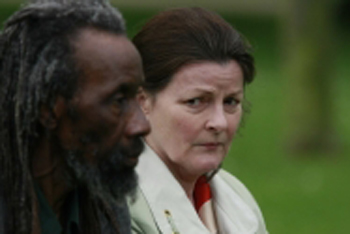 In London River, French-Algerian director Rachid Bouchareb strays from previous filmic efforts dedicated to the torturous relationship between industrialized countries and the developing world, especially the latter’s exploitative relationship with the former. In his new film, Bouchareb trains his attention instead on issues related to immigration, assimilation and prejudice in an intimate portrait of two characters roughly thrown together following the July 5, 2005, suicide bombings in London.

After failing to contact her daughter for several days following the attacks, widow Elisabeth is motivated by the fear that something horrible has happened to her daughter. Drawn from her provincial life in Guernsey, in the English countryside, she arrives in London with little more than the address for her daughter Jane’s apartment, which she finds above a halal butcher shop in a Muslim neighborhood. Elisabeth wears her prejudices on her body like an uncomfortable suit; she shrinks when approached by the genial proprietor of the butcher shop, who also happens to be her daughter’s landlord. Later, on the phone with her brother, she expresses her abstract fears of taking up residence in a neighborhood “crawling with Muslims.” While Elisabeth is clearly fearful of her immigrant-saturated surroundings, and harbors irrational suspicions about what “they” have done with or to her daughter, her actions are never driven by obvious malice. But her insular life and fears for her daughter’s well being have left her unprepared to navigate the complexities of multicultural London.

Meanwhile, West African absentee father Ousmane (Sotigui Kouyate) is also scouring London for his son Ali, whom he hasn’t seen for 15 years. Ousmane’s emotional register never strays far from stoicism, but Kouyate makes this work incredibly well, wearing an entirely believable world-weary thousand-yard stare granted by a hard life. Shut off from the wider city by his lack of English, Ousmane instead turns to a local imam to help him search for his son. Through their amateur detective work, Ousmane is able to determine that Ali and Jane knew each other, and reaches out to Elisabeth to share his results. However, Ousmane’s innate foreignness is almost too much for Elisabeth to bear, and beset by suspicions, she rejects Ousmane’s overture and turns to the police.

Bouchareb’s sensitivities to the racial and cultural diversity within Islam is reflected in the Muslim characters in the film, among them a member of London’s Metropolitan police. However, he quickly falls back on obvious tropes in showcasing the evolutionary arc of Elisabeth, who fails to demonstrate a mote of empathy until late in the film. When her transformation from narrow-eyed suspicion of the “other,” to Ousmane’s compatriot and confidant comes, it is sudden, complete and largely unexplained. Elisabeth even reacts to a growing body of evidence that Ali and Jane were a romantic couple with an understated acceptance that seems at odds with her earlier disposition. However, Bouchareb does manage to stray from expectation in the moment when Ousmane reveals to Elisabeth his disproven fear that Ali had been radicalized, and might be responsible for the bombing.

London River is useful as a stand-in for the wider internal struggles Western Europe is undergoing in coming to terms with multiethnic societies, with many nations witnessing the rise of far-right nationalism and xenophobia percolating into mainstream politics as a result of economic malaise. The film, however, never veers close to such an overt stance on such issues (or any political issue, for that matter), preferring a safer middle ground that allows for a happy ending, of sorts. Elisabeth is still a few shades of ignorance away from joining up with the British National Party, and she is redeemed when she offers to let Ousmane, who is short on funds, take shelter at Ali and Jane’s apartment. Her metamorphasis from distrusting biddy complete, Elisabeth seems intended to convey to the audience that a mutual fear is enough to overcome mild prejudice. A cynical conclusion perhaps, but one that, sadly enough, might have its roots in truth.