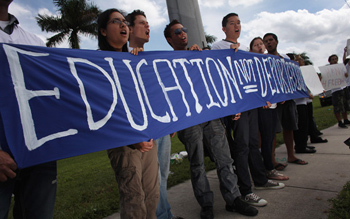 In the wake of the bruising defeat of the DREAM Act a year go, undocumented immigrant youth determined to keep up the momentum of their movement pivoted to demand pro-immigrant legislation at the state level this year. In several states those demands, usually for tuition equity for undocumented students hoping to go to college, turned into wins. But as the year winds down, two separate fights for tuition equity are under way on two separate coasts, hinting at the long struggle ahead.

In New York, immigrant rights activists are organizing themselves to file a package of bills in the coming weeks to extend tuition assistance to undocumented students who go to state colleges and universities. Meanwhile in California, immigrant rights activists have been waging a quiet battle to preserve the recently signed AB 131—a law which does the same thing New York is attempting to do now—from a referendum to put a repeal of the law on the ballot next year.

“We’re really in a great starting place in terms of the broad base of support from allies here in New York,” Vimo said. “Of course the economic climate doesn’t make it easy but … we hope that this is a climate for progressive change.”

The New York State Board of Regents recently voted to support opening up TAP to undocumented students, and the measure also has the backing of other high-ranking state education officials, as well as interfaith coalitions and business groups.

On the other side of the country, Assemblyman Tim Donnelly, a tea party-backed Republican from Twin Peaks, California, announced a campaign to repeal the California DREAM Act immediately after Gov. Jerry Brown signed it into law in October, but had made his criticisms of the bill well-known long before. The California DREAM Act included AB 130, which allowed undocumented students to apply for a privately funded pot of money, but it was AB 131, which would allow undocumented students to apply for publicly funded financial aid like Cal Grants and other state funds to pay for school, which was the more hard fought battle. It’s AB 131 which Donnelly wants to repeal.

“I would urge you to listen to the tens of millions of Californians, who believe that in these times, our limited resources should be reserved for citizens and legal residents,” Donnelly wrote in a letter to Gov. Jerry Brown before he signed AB 131 into law in October. Donnelly argues that in the current economic crisis, the state can’t afford to extend benefits to undocumented immigrants who would have no right to legally work in the country after they complete college anyway.

Using the current economic climate as an excuse to hold off on granting tuition equity to students is a disingenuous move, say backers of the law.

“For people who are trying to repeal AB 131 like Assemblyman Tim Donnelly, there is no right time for this,” said Dan Savage, the chief of staff for Assemblyman Gil Cedillo, who authored AB 131. “Although Mr. Donnelly is arguing that we can’t afford this, make no mistake, if we had a $20 million surplus in the bank he’d still be saying the same thing.”

Savage says that AB 131 in fact makes plain economic sense for the state, which is required to provide a K through 12 education for California students, regardless of their immigration status.

“One of the arguments is that undocumented students take away spots from other Americans,” said Carlos Amador, who works with Dream Team Los Angeles, an undocumented immigrant youth organizing group.

“But we see undocumented students as part of the fabric, as part of the nation and the state, so we don’t see ourselves as different at all from other students. We grew up here, we went to school here, and we were raised with the rest of the population in California.”

New York and California are not alone. This year Maryland and Rhode Island extended in-state tuition to state residents who’d completed high school in the state, regardless of their immigration status. Still, the tuition equity victories at the state level this year are tempered by the extreme bigotry that’s been codified with Alabama’s HB 56, and other anti-immigrant laws inspired by Arizona’s SB 1070. Indeed, the same year that Alabama and a handful of other states saw fit to pass anti-immigrant laws that all but legalized racial profiling, an unprecedented number of states extended rights to undocumented immigrants.

The flurry of state immigration laws, on the left and right, were spurred in large part by the bleak congressional outlook for any movement on immigration.

“After last year’s DREAM Act vote, we kind of had seen the writing on the wall,” said Adey Fisseha, a policy attorney at the National Immigration Law Center. “You saw people say, ‘Okay, if the DREAM Act isn’t going to pass, then what can we do?”

The year has also been full of state efforts to push back against the Obama administration’s deportation agenda and enforcement programs like Secure Communities, but, Fisseha says, folks are still trying to figure out what a progressive pro-immigrant legislative agenda looks like without the hope of comprehensive reform at the federal level in the next year.

“In-state tuition still remains one of the bright points where people have been able to coalesce, in passing pro-immigrant bills.”

And in the absence of any kind of comprehensive reform, the bills that are passed now can build the framework for what kinds of policy changes we’ll see at the federal level eventually, said Tania Mattos, an activist and undocumented immigrant who works with the New York State Youth Leadership Council.

“It’s very important for New York, California, Illinois, all these states that have taken a stand, to say that there are actually states in this country that believe in and embrace immigrants,” Mattos said.

Until then, undocumented immigrant activists say they are ready for a long fight at the state level.

“It was long overdue to bring justice to this issue and bring us closer to equal access to higher education,” said Amador, the activist from Los Angeles, adding that people have been organizing for a version of AB 131 for a decades.

“Undocumented students are responsible for the passage of the bill, and for that reason they won’t let it go so easily.”