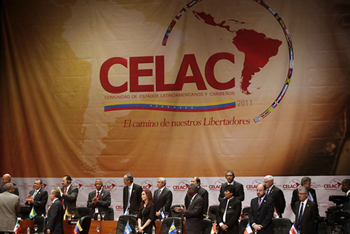 Rain clouds ringed the lush hillsides and poor neighborhoods cradling Caracas, Venezuela as dozens of Latin American and Caribbean heads of state trickled out of the airport and into motorcades and hotel rooms. They were gathering for the foundational summit of the Community of Latin American and Caribbean States (CELAC), a new regional bloc aimed at self-determination outside the scope of Washington’s power.

Notably absent were the presidents of the U.S. and Canada – they were not invited to participate. “It’s the death sentence for the Monroe Doctrine,” Nicaraguan President Daniel Ortega said of the creation of the CELAC, referring to a US policy developed in 1823 that has served as a pretext for Washington’s interventions in the region. Indeed, the CELAC has been put forth by many participating presidents as an organization to replace the US-dominated Organization of American States (OAS), empower Latin American and Caribbean unity, and create a more equal and just society on the region’s own terms.

The CELAC meeting comes a time when Washington’s presence in the region is waning. Following the nightmarish decades of the Cold War, in which Washington propped up dictators and waged wars on Latin American nations, a new era has opened up; in the past decade a wave of leftist presidents have taken office on socialist and anti-imperialist platforms.

The creation of the CELAC reflected this new reality, and is one of various recent developments aimed at unifying Latin America and the Caribbean as a progressive alternative to US domination. Other such regional blocs include the Union of South American Nations (UNASUR) which has successfully resolved diplomatic crises without pressure from Washington, the Bank of the South, which is aimed at providing alternatives to the International Monetary Fund and the World Bank, and the Bolivarian Alliance of Latin America (ALBA), which was created as an alternative to the Free Trade Area of the Americas, a deal which would have expanded the North American Free Trade Agreement throughout Latin America, but failed due to regional opposition.

The global economic crisis was on many of the leaders’ minds during the CELAC conference. “It seems it’s a terminal, structural crisis of capitalism,” Bolivian President Evo Morales said in a speech at the gathering. “I feel we’re meeting at a good moment to debate … the great unity of the countries of America, without the United States.”

The 33 nations comprising the CELAC make up some 600 million people, and together are the number one food exporter on the planet. The combined GDP of the bloc is around $6 trillion, and in a time of global economic woes, the region now has its lowest poverty rate in 20 years; the growth rate in 2010 was over 6% – more than twice that of the US. These numbers reflect the success of the region’s social programs and anti-poverty initiatives.

In an interview with Telesur, Evo Morales said the space opened by the CELAC provides a great opportunity to expand the commerce of Latin America and the Caribbean in a way that does not depend on the precarious markets of the US and Europe. In this respect he saw a central goal of the CELAC being to “implement politics of solidarity, with complementary instead of competitive commerce to resolve social problems…”

While the US is the leading trading partner for most Latin American and Caribbean countries, China is making enormous inroads as well, becoming the main trade ally of the economic powerhouses of Brazil and Chile. This shift was underlined by the fact that Chinese President Hu Jintao sent a letter of congratulations to the leaders forming the CELAC. The letter, which Chávez read out loud to the summit participants, congratulated the heads of state on creating the CELAC, and promised that Hu would work toward expanding relations with the region’s new organization.

The US, for its part, did not send a word of congratulations. Indeed, Washington’s official take on the CELAC meeting downplayed the new group’s significance and reinforced US commitment to the OAS. Commenting on the CELAC, US Department of State spokesman Mark Toner said, “There [are] many sub-regional organizations in the hemisphere, some of which we belong to. Others, such as this, we don’t. We continue, obviously, to work through the OAS as the preeminent multilateral organization speaking for the hemisphere.”

Many heads of state actually saw the CELAC meeting as the beginning of the end for the OAS in the region. This position, held most passionately by leaders from Ecuador, Bolivia, Venezuela, Nicaragua and Cuba, was best articulated by Venezuelan President, and host of the CELAC meeting, Hugo Chávez. “As the years pass, CELAC will leave behind the old OAS,” Chávez said at the summit. “OAS is far from the spirit of our peoples and integration in Latin America. CELAC is born with a new spirit; it is a platform for people’s economic, political and social development, which is very different from OAS.” He later told reporters, “There have been many coup d’états with total support from the OAS, and it won’t be this way with the CELAC.”

However, the presidents involved in the CELAC vary widely in political ideology and foreign policy, and there were differing opinions in regards to relations with the OAS. Some saw the CELAC as something that could work alongside the OAS. As Mexican chancellor Patricia Espinosa said, the OAS and the CELAC are “complementary forces of cooperation and dialogue.”

A test of the CELAC will be how it overcomes such differences and makes concrete steps toward developing regional integration, combating poverty, upholding human rights, protecting the environment and building peace, among other goals. The final agreements of the two day meeting touched upon expanding south to south business and trade deals, combating climate change and building better social programs across the region to impact marginalized communities. In addition, the CELAC participants backed the legalization of coca leaves (widely used as a medicine and for cultural purposes in the Andes), condemned the criminalization of immigrants and migrants, and criticized the US for its embargo against Cuba.

Various presidents at the CELAC spoke of how to approach these dominant issues. Nicaraguan President Daniel Ortega said the CELAC should “monitor and rate” the US anti-drug efforts. As long as the US continues its consumption of drugs, Ortega said, “All the money, regardless of by how much it’s multiplied, and all the blood, no matter how much is spilled” won’t end the drug trade.

Yet there are plenty of contradictions within the CELAC organization itself. The group is for democracy but includes the participation of Porfirio Lobo from Honduras, the president who replaced Manuel Zelaya in unfair elections following a 2009 military coup. The CELAC is for environmental protection, yet its largest participant, Brazil, is promoting an ecologically disastrous agricultural model of soy plantations, GMO crops and poisonous pesticides that are ruining the countryside and displacing small farmers. The group is for fairer trade networks and peace, yet various participating nations have already signed devastating trade deals with the US, and corrupt politicians at high levels of government across the region are deeply tied to the violence and profits of the transnational drug trade.

These are some of the serious challenges posed to Latin American and Caribbean unity and progress, but they do not cancel out the new bloc’s historical and political significance. The creation of the CELAC will likely prove to be a significant step toward the deepening of a struggle for independence and unity in the region, a struggle initiated nearly 200 years ago and largely led by Latin American liberator Simón Bolívar, whose legacy was regularly invoked at the CELAC conference.

In 1829, a year before his death, Bolívar famously said, “The United States appears destined by Providence to plague America with miseries in the name of Freedom.” Yet with the foundation of the CELAC under the clouds of Caracas, the march toward self-determination is still on.

Benjamin Dangl attended the CELAC conference, and is the author of Dancing with Dynamite: Social Movements and States in Latin America (AK Press, 2010) and The Price of Fire: Resource Wars and Social Movements in Bolivia (AK Press, 2007). He edits TowardFreedom.com, a progressive perspective on world events, and UpsideDownWorld.org, a website on activism and politics in Latin America. Email Bendangl(at)gmail(dot)com.