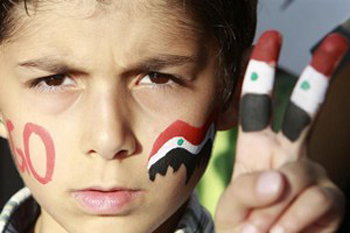 Political scientist Erica Chenoweth, at her blog Rational Insurgent, has a list of 13 ways that one can contribute to the popular movement in Syria that is standing up against a brutal ruler willing to crush it by any means necessary. Chenoweth, whose name we drop a lot on this site, is co-author of the important new book Why Civil Resistance Works. She introduces her post this way:

In light of the dire news out of Syria, international action is ever more urgent. In my judgment, Syria reflects one of the paradoxes of international politics: its strategic importance in the region renders international military action nearly impossible–or at least extremely unlikely. Regional and global powers are not willing to risk the potential regional  or global conflagration that would result from foreign military intervention in such a key state, even if inaction means that they will be witnesses to the senseless slaughter of thousands of civilians.

But when governments and international governmental organizations are unwilling or unable to act, civilians across the globe can still play a vital role. It’s time to demonstrate the power of “civilian diplomacy”—a concept that Hillary Clinton has been touting for a couple of years, and which has some real potential to change the course of the Syrian revolution.

What follows are ideas of things that people both inside and outside Syria can do to help. Read more to find your inner civilian diplomat.