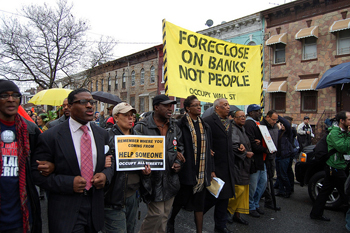 It was never a genuine question. Money media prattled on about Occupy Wall Street’s supposedly ineffable demands the same way they batted aside the end capitalism signs to wonder what the Seattle protesters had on their minds. That said, the Occupy movement has always been more about doing than demanding and this week, OWS stepped it up another notch.

On December 6, OccupyYourHomes joined with local community organizers to take on the housing crisis. In twenty-five cities, protesters interrupted house auctions, blocked evictions and occupied foreclosed homes. In East New York they moved Alfredo Carrasquillo, Tasha Glasgow and their two children into a foreclosed home that had stood empty for three years. I attended the action Tuesday and couldn’t drag myself away. Even as the rain drizzled and the temperature sank, I watched the numbers of protesters grow and thought of the many, many members of underfunded community groups I’ve spoken to over the years. Among those, Community Voices Heard, New York Communities for Change, Picture the Homeless, Organize for Occupation, VOCAL-NY and Reclaim the Land. They talked on GRITtv about toxic loans and targeted neighborhoods, forced foreclosures, fear and the general lack of national interest.

This Tuesday, I saw members of those same groups again, among them, GRITtv regular Rob Robinson. An end-homelessness activist who lived on the streets for a while after losing his job at a data processing company, Robinson has worked for years with Picture the Homeless, and now Reclaim the Land. East New York has one of the city’s greatest concentrations of single-family homes, and one of the country’s highest rates of eviction and foreclosures. “For two years, we’ve been going block to block, knocking on these doors,” said Robinson. This Tuesday, he was walking those blocks again, this time, with 500 people—and a slew of cameras—at his back. Smiled Robinson, “It makes a world of difference.”

Malik Rhasaan is a 28-year-old man from South Jamaica, Queens, who’s been one of of the organizers behind Occupy The Hood. Rhassan, with colleagues in Detroit and Atlanta, started pushing Occupy Wall Street to team up with communities in need ever since the protest began in Zuccotti Park. “You want to feed people, do it in the South Bronx” he’d say. “You want to fight eviction? Fight it in the South Bronx.” To Rhassan, December 6 was a jump in the right direction. “Now we’ll see how long the ball rolls.” In the twenty-four hours that followed, Occupy The Hood received “about a hundred e-mails” from people Rhassaan had never heard of before, asking OWS to come to their block.

On Thursday afternoon, as a tweet went out that more OWS support was needed at 702 Vermont Avenue, the occupied house in East New York, Rhasaan said, “I just hope the people who participated [in the December 6 action] realize how serious this is. That father [Alfredo] is trusting the community to be there for him…” In fact, that’s been the question for the movement from the start: can it sustain all that to which it’s given birth? First it was about confidence. Robinson says he was skeptical until he saw the occupation survive long enough to make mistakes—and ask for help. “They reached out. And I was impressed with that.” Then it was about a place: offer food and shelter for long enough and soon you’ll attract people who have no place of their own and need to eat. Says Rhasaan: “Homeless kids gave OWS its numbers.… OWS gave those kids a second chance to have a life.” Now it’s communities.

As Boots Riley, of Occupy Oakland (and the Coup) told me a few weeks back. “What we’re thinking about now is how OWS can become a tool in the hands of communities.” Which is to say, where can 500, 1,000, 2,000 people, make a difference? At an eviction, a housing auction, a school board hearing, in a congressman’s office—OWS have shown they can make an impact in all those places. American employers have a nasty habit of picking off lone-labor organizers.

Will that be next? “It’s certainly harder to fire a Walmart union organizer in front of a crowd, in public,” says Riley. Knowing OWS, we’ll probably see a bit of all of the above. It’s a lot to bite off and chew.

“The way to get community support,” says Rhasaan “is to work in the community. Offer change people can measure.” Note, he didn’t say “believe in.” Been there, done that. What’s being asked of OWS now is not what the movement can demand but what they can deliver, for people who feel their lives, not just their hopes, hang in the balance.