As Occupy Wall Street’s birthday party got going at midday today, the mood was mixed—not unlike the mood with which, in a series of improvisations, the movement began three months earlier on September 17. I talked with organizers I’d known from the movement’s first planning meetings, who were milling around Duarte Square, an open space a mile north of the old encampment at Zuccotti Park. Cars were rushing by along Canal Street toward the Holland Tunnel, spewing exhaust. The square was full; lots of music, planning, anticipating, sign-making, puppeteering, the works. Usual protest stuff. But uncertain.

The imperative for the day was to “Re-Occupy”—specifically, to occupy the empty lot next to Duarte, owned by Trinity Wall Street, which is one of the oldest churches in Manhattan and one of the city’s largest property owners. This was also the place where the occupiers had come the morning after the surprise eviction on November 15, only to be promptly ejected by riot police. Now, after a 15-day hunger strike, failed negotiations with Trinity, and even a letter from Desmond Tutu calling on the church to let the occupiers use the lot (followed by another one denouncing protester trespassing), they were back. They wanted a place to build a new encampment, a new headquarters for the movement. Trinity, for its part, gave no sign of budging. And some in the movement weren’t sure it made sense to keep pushing.

“When it comes to space, Trinity has been pretty good to us,” one organizer told me. The church, after all, has already allowed occupiers to use its indoor spaces downtown for meetings, WiFi, bathrooms, and breaks from the cold.

I repeated this to Father Paul Mayer, a Catholic priest and longtime radical. “No, Trinity hasn’t done enough,” he replied. When people are crying out in need, he explained, churches can’t go with business as usual. I asked how he thinks the Catholic Church would respond to a demand like this from occupiers. “It would be worse, of course.”

In the days leading up to so-called D12, as the demands upon Trinity’s benevolence mounted, the occupiers’ request sounded more desperate than strategic: sanctuary. (“#Sanctuary” was even one of the hashtags used for the day, along with “#D12,” on Twitter.) Trinity Church, they seemed to be saying, act like a church!

For the last few months, Occupy Wall Street has given an enormous jolt of energy to the political imaginations and actions of people across the United States and around the world. But now, after more than a month without Zuccotti Park as a home base, the movement has lost its center; meetings often go nowhere, and those who’ve given themselves to activism full-time, without escape or enough rest, are showing signs of wear. As the initial euphoria of the movement wears off, its crisis is in no small part a spiritual one.

By mid-afternoon, I and a thousand others watched as retired Episcopal Bishop (and Vietnam veteran) George Packard, dressed in a purple cassock, was the first to mount a festive yellow ladder over the fence around Trinity’s lot, climb up, and jump down—a trespasser on the land of his own church. Father Mayer soon followed, as did Sister Susan Wilcox, along with a handful of other clergy and several dozen occupiers, who then called on others to join, to come in, to climb the fence and give them strength in numbers. Some did. But soon, the police were in there with them too, arresting everyone inside, clergy and all. As usual, the crowd reacted angrily against police officers—“Shame!” “Who do you serve?”—and some outside of the fence began rocking it back and forth, trying to bring it down. This caused the police to charge, to push people back, to clear the area around the perimeter. The protesters retreated back to Duarte Square, where a dance party was already starting. As they did, they cried a chant often heard in the occupation’s uneasy first days: “This is just a practice!” 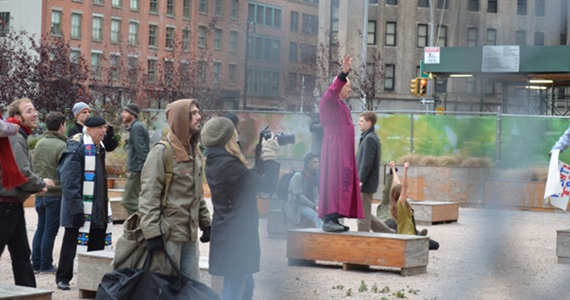 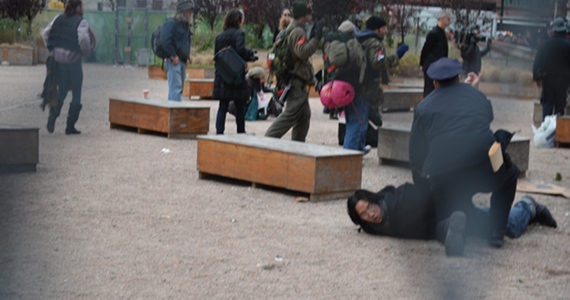 Walking around the fenced-in lot, I found Astra Taylor, who had recently articulated her doubts about this action in the third “OWS-Inspired Gazette” produced by the literary magazine n+1. Despite a few moments of excitement as the ladder went up and the bishop went over, her fears were confirmed by what took place. “What is this going to look like?” she asked. To her mind, it wasn’t clear that the movement is strong enough to be targeting its lukewarm friends. “When are we going to go after the real bad guys?” She and I watched as police took Bishop Packard away in plastic cuffs, and as protesters ran by, shouting. Citing the silent vigil that followed the pepper-spray attack on UC Davis protesters, she added, “Sometimes restraint is a good thing.”

One can’t help but imagine that, as publicity stunts go, there are more straightforwardly nefarious targets imaginable than a church—even an especially well-endowed and Wall Street-friendly church—whose holdings go to fund outreach and charity, not executive bonuses or political candidates. For a movement that still struggles to make its goals clear to the public, putting the focus on this church, rather than a bank or a lobby or an appendage of government, will further muddy the message and provide kindling to critics.

What would appear to be a strategic faux pas, however, has a certain strategic logic nonetheless—even if a not very articulate one. The movement has lent American society so much energy, rage, and creativity, and it has made a rupture. It has broken a spell. But now it needs the very institutions that have been the mortar of complacency to follow suit, to take risks. It’s not enough to simply applaud the movement and then keep keeping on. The unions need to endanger their comfortable pacts with politicians and big business, to be willing to actually shut down the engines of an unjust economy. The non-profits need to mobilize their resources and knowledge in new, more radical ways. And the religious communities need to offer their spaces, their networks, their moral leadership. Perhaps most of all, their spiritual resources are needed—the wells of hope, the rubrics of ritual, the songs, the techniques of perseverance. These were keys to the success, for instance, of the civil rights movement.

If Occupy Wall Street is in some sense, as Adbusters’ initial call to “Occupy” stated, “a Tahrir moment,” consider Egypt as well. There, the major days of action were Fridays, fueled by the gatherings in the mosques, even despite restrictions imposed on the speeches of state-controlled imams. Protesters prayed en masse before advancing police vehicles. Unions were eventually the decisive force, threatening to halt the country’s economy on the movement’s behalf. After Mubarak’s fall, the revolution’s future depends on those resurgent political organizations strong enough to rally people against the military’s bid to retain its hold on power.

“Sanctuary for Assembly,” reads one of the banners that protesters carried on D17. “Assembly,” of course, is the movement’s insistence that it needs physical, in-person, public, outdoor spaces to conduct its experiments in direct democracy. This is the method by which Occupy has caught fire in communities throughout the country. It’s familiar. But the word “Sanctuary” is something new, with winter just a few days away. It’s a cry, a plea, for the institutions which uphold the way of things to no longer stand aside, but to join in making the rupture grow—to radicalize, and to occupy.