CAIRO—Egyptian children are taught about the superiority of men over women beginning in the first grade. School textbooks show the boys playing in the front yard while the girl helps her mother in the kitchen. At home, the father leaves the house as he pleases while the mother toils at her household chores. Early in life, the new generation learns who serves whom.

Growing up in this atmosphere girls lose confidence that they can do anything other than be a cook and a baby-making machine. This is fine by the men who don’t want them to aspire to anything more than that.

Yet, when the call went out last January to take to the streets and make a stand for freedom against the dictatorship of Hosni Mubarak, women were right alongside men in making the Egyptian revolution happen. They rallied side-by-side with men in Tahrir Square, showing exceptional bravery in the frontlines of protests, inhaling tear gas and sleeping in tents during sit-ins.

But once Mubarak was driven from power, we saw that the “Republic of Tahrir” did not magically change everything. Women have continued to play a vital role in the protests and in many of the new political parties but their participation falls on deaf ears. In the post-revolutionary cabinet headed by Prime Minister Essam Sharaf, there was only one female minister.

In response, Egyptian feminists called a “Million Woman March” on March 8 (International Women’s Day). Turnout was small and almost as soon as the women gathered in Tahrir Square they were outnumbered and beset upon by male counterdemonstrators chanting slogans like “Go home, wash clothes” and “You are not married, go find a husband.” The counterdemonstrators then violently pushed their way through a small protective ring of men and attacked the women, forcing them to scatter. The police who were standing nearby did nothing.

“When we talk about women’s rights, the response is always: ‘Now isn’t the right time,’” said Rana Khalil, 22, a recent college graduate.

The government of the current prime minister Kamal el-Ganzouri has appointed two women cabinet ministers both of whom were given minor posts. The Supreme Council of the Armed Forces (SCAF) and the political parties have scrapped a 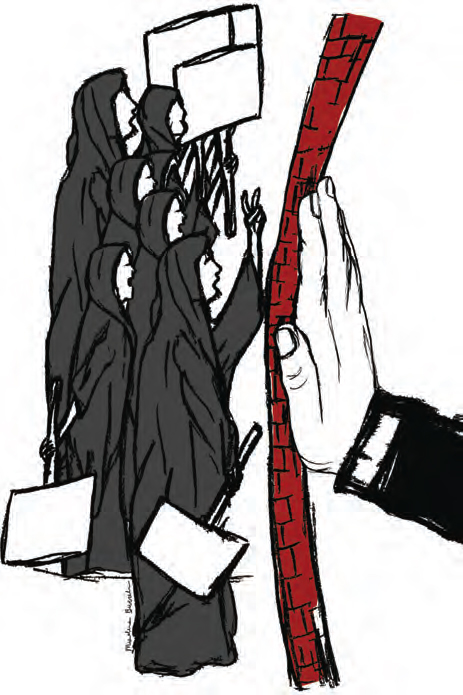 Mubarak-era law that set a quota for the number of women in parliament leading former U.S. President Jimmy Carter to project that the newly elected Egyptian parliament will have one to two percent women.

Meanwhile, women continue to routinely experience sexual harassment when they are out in public. Those who join protests can be targeted for special abuse.

Some women detained at protests by the military have been subjected to virginity tests by a male military doctor with other soldiers present in the room. Most of the victims of this practice have remained anonymous but one, Samira Ibrahim, 25, has defied the conservative taboos of our society and sued the military-led government.

In December the State Council Administrative Court ruled in Ibrahim’s favor banning the SCAF’s virginity tests on female detainees. Women marched to Tahrir Square chanting against the military in celebration of the court order.

“I also filed a sexual assault charge but the court decided to lessen the charge,” Ibrahim told The Indypendent. “They are the enemy, the judge and the authority and I am just a little woman facing them.” Still she remains determined. “If the revolution succeeded, my case will,” she added.

The military’s mistreatment of female protesters showed its face again in December when soldiers in Tahrir Square were filmed dragging and beating a young woman whose robe was torn off exposing her bare torso and a blue bra. The identity of the “blue bra girl” remains unknown but the attack sparked a rally of a couple thousand women who took to the streets to denounce the SCAF. In a rare move, the military leadership apologized for the incident.

Whether women can collectively assert their power more often in the future remains to be seen. The revolution raised great expectations. Unfortunately, many men are unwilling to relinquish the innate sense of superiority with which they have been raised and are content to be little Murbaraks in their treatment of women.