Occupy Wall Street celebrated its six-month anniversary yesterday in Zuccotti Park with a fast-forward replay of last fall: re-occupation, carnival, violent eviction, defiance. A morning chalk-in for families and an early afternoon march around the Financial District (actually, two: one silent and one rowdy) began a day of reunion at the movement’s New York home. As re-renamed Liberty Plaza (or Square or Park) became full once again with hundreds of people, the hardy organizers who’ve spent the winter in meetings and arguments were drowned out by joiners, curious visitors, drummers and reporters. A 24-hour re-occupation was called, and new nonviolent defensive formations were rehearsed en masse. They danced, chanted and held a General Assembly. Numbers swelled to close to a thousand when marches from the nearby Left Forum conference joined later in the evening. The whole day was a welcome reminder that in occupation a magic dwells.

Around 10 p.m., tents and tarps went up in the park, among them several tents held high in the air above the crowd. Defenses went up too, including yellow police tape marked “Occupy” and a similarly rebranded roll of orange netting—just like what police have used to surround and trap OWS marches before. 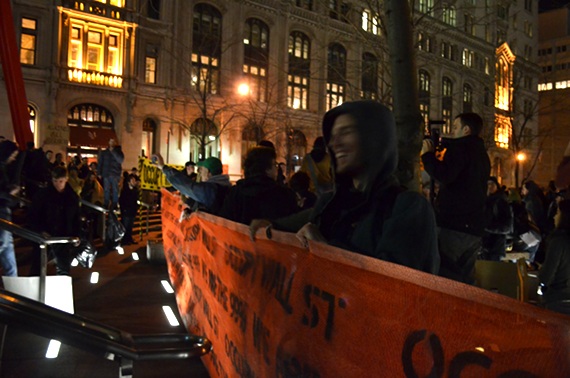 But, around 10:30, more than a hundred police and Brookfield Properties private security poured into the park. They seemed intent on clearing people while minimizing arrest numbers, though dozens of Occupiers were beaten and arrested for holding their ground, and were taken away in police wagons and a repurposed city bus. Not until almost 45 minutes later did two ambulances arrive for the injured, including a woman who appeared to be suffering a seizure. At least two glass bottles were thrown and shattered near police.

Some Occupiers remained, but others set out on a march to Union Square, throwing bags full of trash into the street and chanting against the police and the state, with a few arrested in skirmishes along the way. The rest arrived at Union Square, holding up a yellow “Occupy Wall Street” banner on the square’s main steps, facing a line of several dozen police officers standing shoulder-to-shoulder. The crowd began to dissipate as the early morning wore on.

Familiar feelings, all over again: courage, awe, exuberance, rage, sadness, pain, fatigue. The city succeeded once again if its purpose was to keep the protesters’ attention on the police, rather than, for instance, on the financial institutions for which it continually assures support. The Occupiers succeeded if their purpose was to celebrate, reenact and make a blip in the media. What good either success does the world outside Lower Manhattan still remains to be seen, this spring and beyond.