The New York State Youth Leadership Council is an organization of, by and for undocumented youth. Like their counterparts in other states, its members have broken through the fear that has gripped immigrant communities in recent years by "coming out" in public as "undocumented and unafraid." In the process, they have wrought a movement that has helped put immigration reform back on the map and forced both major parties to express support for the DREAM Act — federal legislation that would make it easier for undocumented youth, known as "Dreamers," to attend college and earn a path to citizenship. During March, the YLC celebrated its fourth annual "Coming Out of the Shadows Month." NYC events included a series of "UndocuMics," writing workshops, and a Coming Out Rally (see photos below) in Union Square on March 28. 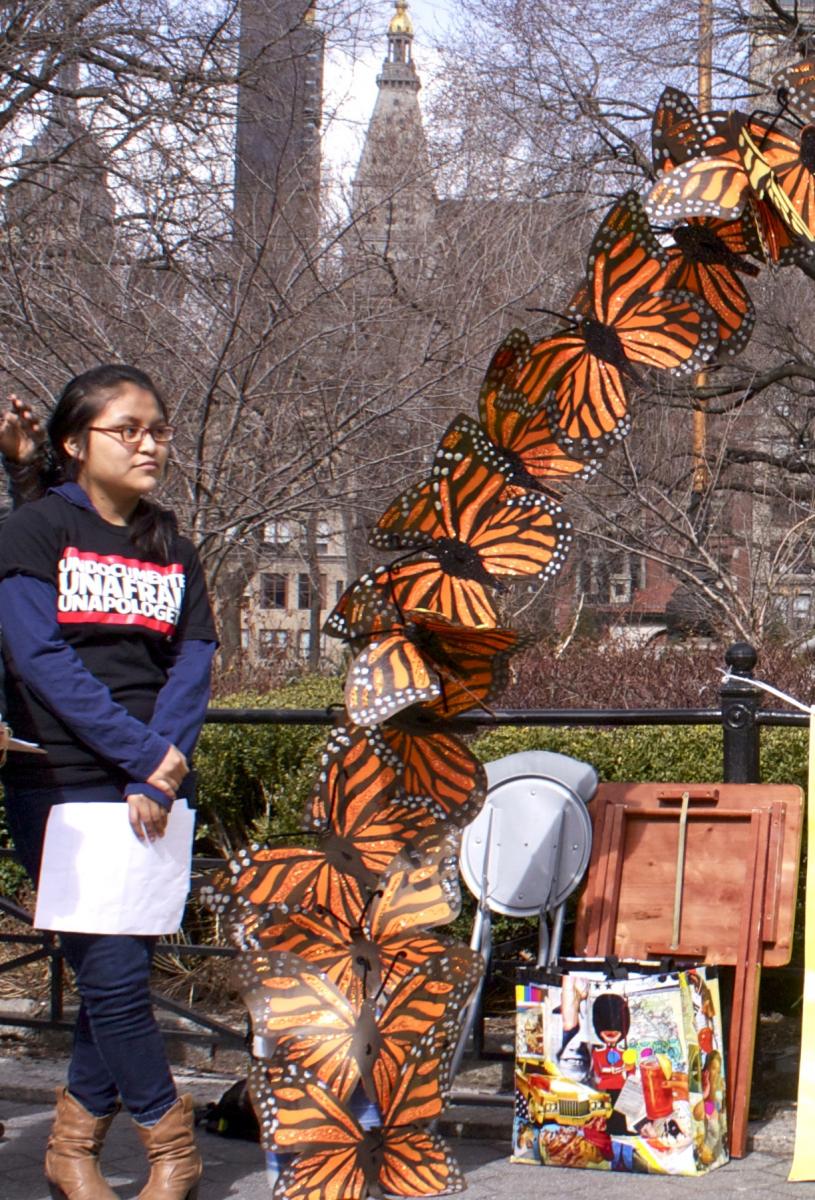 Diana Eusebio came to this country when she was six, along with her two older brothers and her father, soon after the death of her mother in Mexico. She grew up in Florida, until Immigration and Customs Enforcement (ICE) and its Secure Communities program tore her family apart: "My brother was stopped in Florida for driving without a license. And, because of Secure Communities, he was sent to an ICE immigration facility, and he was deported."

After her brother's deportation, Diana moved to New York, where she enrolled in the Hostos Lincoln Academy of Science in the Bronx and quickly joined the undocumented student movement. Diana cites her older brother as her inspiration for coming out, telling her story and sharing her struggles as an undocumented immigrant. "He didn't have the chance to come out to tell his story," she says, so "I am the one advocating for my family. I am telling my story, their story, our story, because he didn't have the chance to." 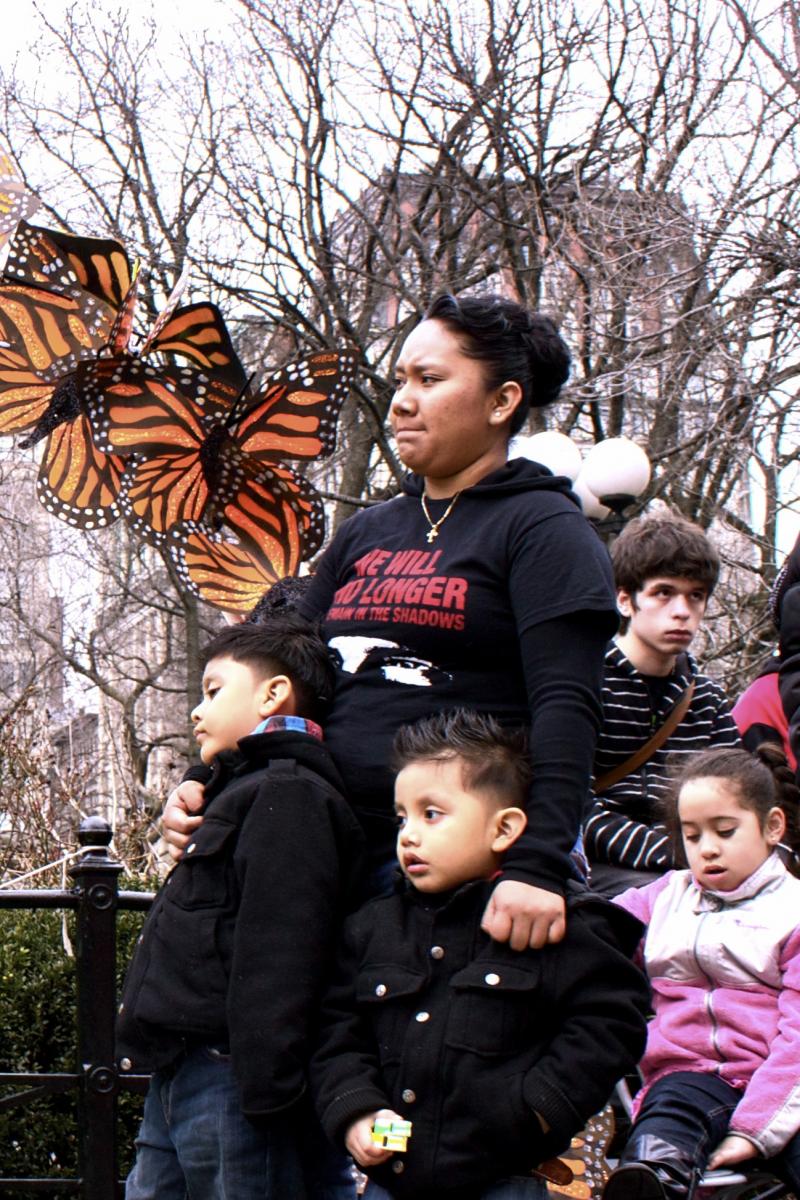 Leydi Bautista La Voz left her hometown in the state of Puebla, Mexico when she was eight. "I am proud of my roots, no matter what," she says. Together with her mother and two brothers, she came to this country without papers. From her very first day at school, she felt she was targeted for being an immigrant. "It was very painful. I knew I didn't belong here." But Leydi, now 20 and a mother of two, has not let her undocumented status keep her back. Alongside the New York State Youth Leadership Council, she also works with the National Latina Institute for Reproductive Health. Pointing to her two young boys, Josue and Henry, Leydi insists, "They are the reason I want to say, ÔIt's enough. It's time.' I deserve to have the right to go to college so I can give a better future to them. Yes, I am a young mom, but that doesn't make me garbage. I am worth it." 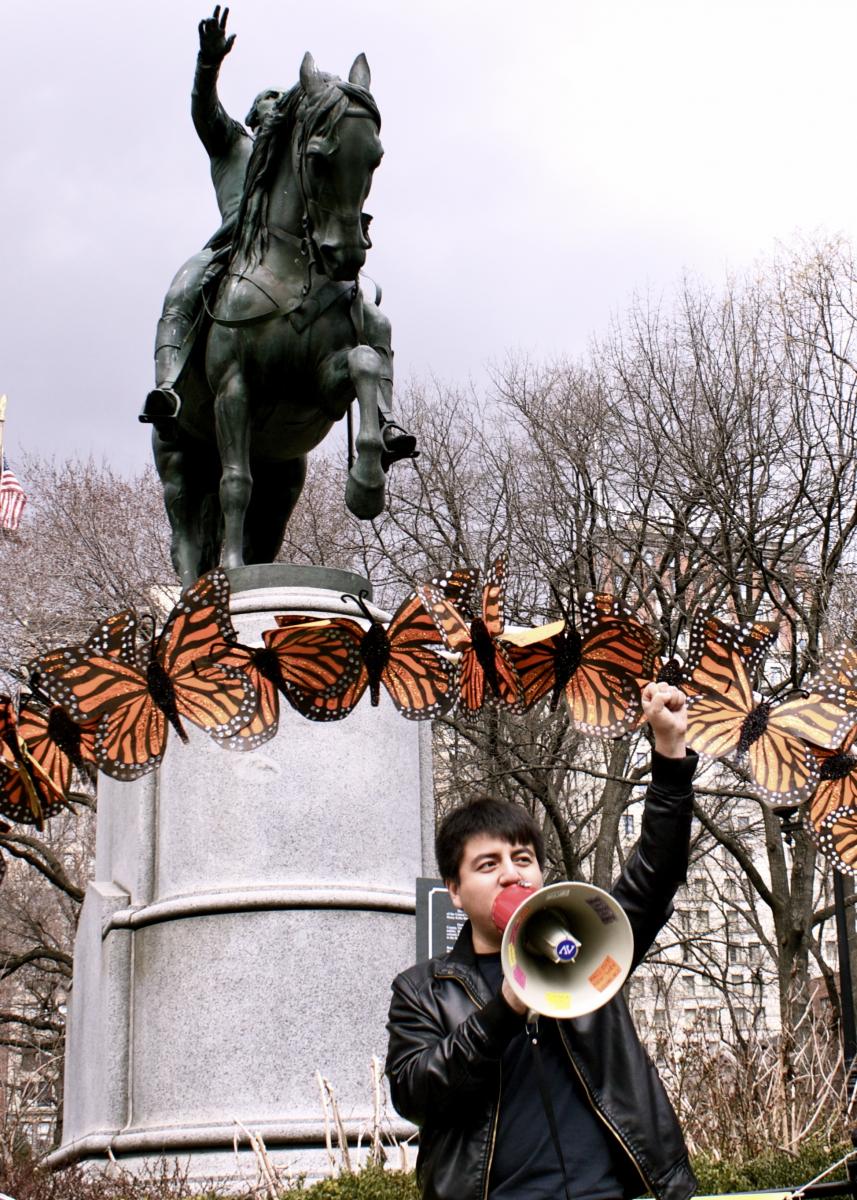 Percy Lujan arrived in the US at the age of 11, along with his family, in search of "better economic opportunities" than they had found in the wake of the U.S-backed dictatorship in Peru. "I knew from the get-go that I was undocumented," he remembers. Unlike most undocumented youth in New York, however, Percy was eventually able to win a full scholarship to Lehman College, in the Bronx. "Most of the smart people that we see in college are very lucky," he says. "Many of the smart people we know are working…as dishwashers or busboys…as housekeepers or babysitters."

When Percy got to Lehman, he helped found a campus group that advocates for undocumented students, as he came to realize that "rights are not granted to us… We have to fight for them." He vows to continue this fight once he gets legal status: "I don't think my struggles are unique…I think they are part of a bigger movement for justice. I won't stop until everyone has liberty and justice." 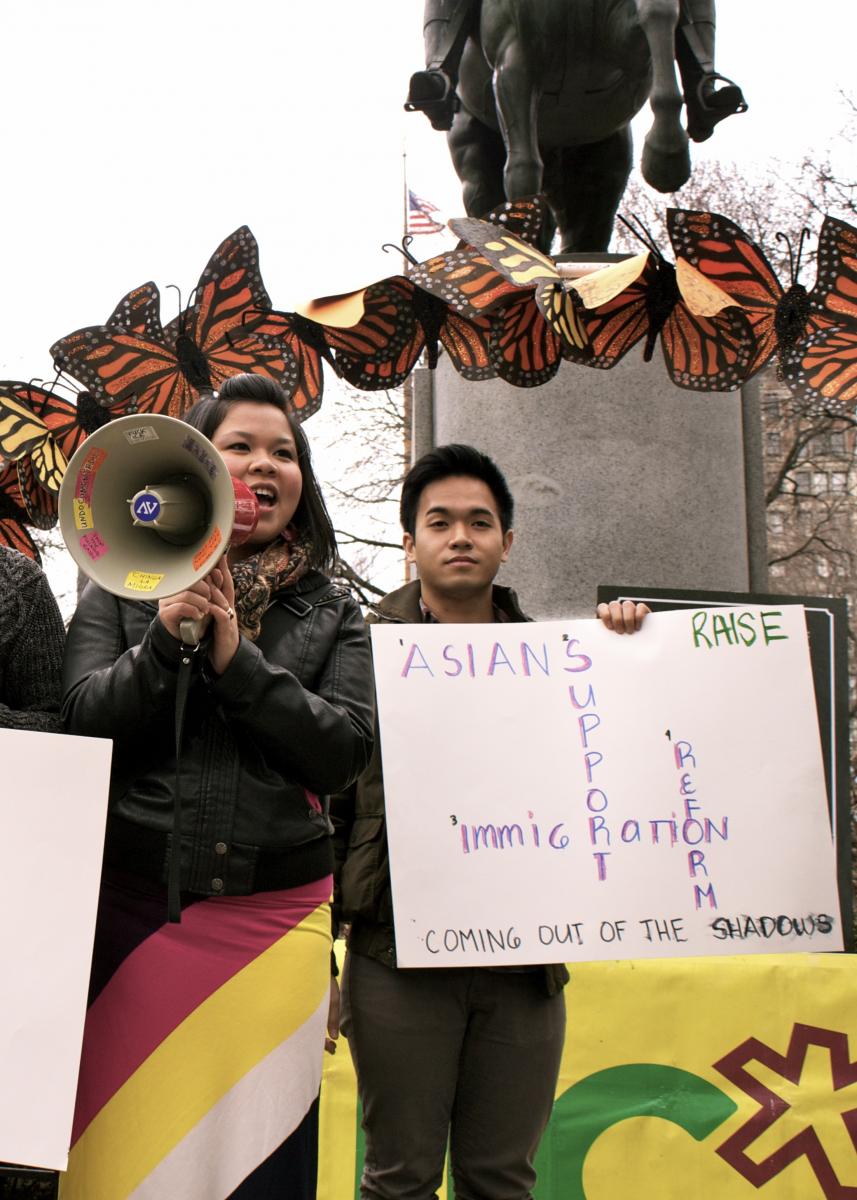 Neriel David Poncé immigrated to this country from the Philippines when he was only 5 years old. "My family came here, they worked their asses off," he recounts, adding, "I don't want to see them go." Neriel (pictured right, holding sign) didn't learn about his own legal status until it came time to apply for college. He speaks of "the heartbreaking moment" for students like him, "when they find out they don't have any means to pay for college, or any help from the government."

Neriel is now in his senior year of high school. He hopes to continue his studies, and has been accepted to SUNY, CUNY, and private schools alike — but, he says, "I can't afford any of this." In spite of his personal struggles, Neriel aspires to be "a voice to others out there. To reach out to them. To find hope, and to fight for this cause." To this end, he has helped organize a group called Revolutionizing Asian-American Immigrant Stories on the East Coast (or RAISE), a youth-led group that aims to empower undocumented Asian students "to share their struggles and find a voice amid the culture of silence." What we need now, he says, is "for the students to be heard."

Shaping the U.S. of the 21st Century, by Juan González

Fighting for a Place to Call Home, by Michael Gould-Wartofsky

A Day Laborer Says, ‘We Deserve the Chance to Become Full Members of the Society We Contribute to Every Day,’ by Robert Meneses