“Freedom in society can be measured by the distribution of orgasms.” This is Natural Law #31 of Brooklyn-based artist Sophia Wallace’s Cliteracy, 100 Natural Laws project, a 10 by 13 foot mixed-media installation that gets everyone talking about the clitoris. This past summer Wallace, in collaboration with sculptor Kenneth Thomas, also turned Cliteracy into an interactive performance piece, hosting a Clit Rodeo that featured a massive, golden and — yes, rideable — clitoris.

Cliteracy places women’s sexual pleasure front and center, and challenges dominant representations of and beliefs about female sexuality. Surprisingly recent scientific research, first published 15 years ago, revealed that contrary to popular belief most of the clitoris is internal and can be up to 9-11 centimeters long. Hence, Natural Law #4: “The clitoris is not a button, it is an iceberg.”

Wallace shared some of her thoughts about sex, art and the clit with The Indypendent.

Alina Mogilyanskaya: How would you say that Cliteracy intervenes into or subverts prevailing sexual norms, and the social and political norms that surround them?

Sophia Wallace: One of the first ways that Cliteracy intervenes is that it says, first of all, this paradigm of the phallus versus the lack is a false paradigm. The idea that the male body has an object and the female body has an empty void that can only be activated by the male body is based on ignorance, bad science, and a pretty intense agenda of control.

And, in fact, the female body has its own autonomous sexual organ that is whole, is fascinating, is powerful, has 8,000 nerves, has a direct blood supply in a way that the penis doesn’t. It doesn’t make it in any way superior, but it does make it interesting.

AM: Is there something specific that prompted this project or inspired it?

SW: My training is in photography. And in my photo work, I’m interested in power: how power is represented visually and how power normalizes itself. I started thinking about sex and asking, how is it possible that today, you never see the clit engaged in depictions of sex? And we know that the vast majority of women — 70 or 80 percent, or even more — orgasm only when their external clit is stimulated, and only when it’s stimulated the entire time. So how is it possible that we never see this anywhere? And moreover, how is it that women are still having so much bad sex and lying about it?

But I knew with this subject that photographs would not help me in any way. If anything, pictures would do harm by giving the false impression that by seeing the clit, it could be known. I wanted to do something architectural and complex, something that dwarfs the physical body, that can’t be consumed in a moment and that can’t be glanced upon and then treated as known.

AM: What was your personal experience with sexual education?

SW: The first time I heard the word rape, I think I was in second or third grade, and I was devastated to understand the definition of that word. One wishes they could unlearn that idea. Unfortunately I think having a female body and learning that word is something that you can’t really ever escape.

From a very young age, girls are psychically separated from their own bodies. Sexual education talks about the male body as reproductive and as sexual. Boys have erections, boys have wet dreams, boys also have semen. Female bodies have menstruation and can deliver babies. The clitoris isn’t really talked about in sexual education; neither is female desire. The idea of a woman having sex but not receiving pleasure is never problematized.

AM: What would you say to someone who is about to walk into the Clit Rodeo for the first time?

SW: The only rules of the rodeo are 1. Respect the clit, and 2. Have a good time. 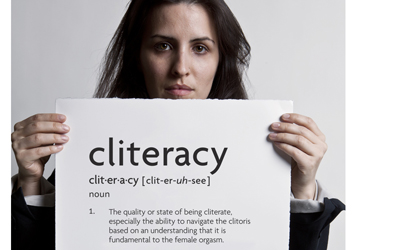 When we hosted the Clit Rodeo at the Wassaic Art Festival in upstate New York in early August, the only faux pas was the presence of a couple of people who wanted to sign up with their rodeo name being “the pussy destroyer” or the “clit wrecker.” The choice to use that kind of language says a lot. Conceptually, the clit is the hero of the rodeo. What are we dominating? We’re dominating these ideas of hierarchy and taboo. And what are we destroying? We’re destroying this residue of shame and this way of cleaving off some bodies from other bodies. So that’s what should be destroyed, not ever the clit.

AM: What are some of the most interesting responses you’re getting?

SW: Recently I got an email from a woman in France who said she found my project and shared it with her boyfriend, and that now she’s satisfied for the first time since they’ve been together. It was amazing.

And then there are also teenagers who have written me and said, “I always thought that sex was supposed to hurt. Now, for the first time, I realize that maybe it doesn’t have to and that I don’t have to wait for it to feel good or accept if it doesn’t.”

And then also women writing me and saying, “I used to try to touch my clit when I’d be having sex with boyfriends and they would smack my hand away, so I just stopped.” And on and on.

AM: When I look at the project, I see on one hand that it’s all about information, celebration and pleasure. On the other hand, there’s a deep sense of indignation. What informs that latter aspect of it?

Also, I’m queer and I feel that I don’t have anything to lose. I think my sexuality is already pathologized. It’s already outside and already treated as the “other.” But being queer also gives me the insight that sex can always be pleasurable. In queer sex, everyone has an orgasm. If you don’t, you don’t keep sleeping together. It’s informed me in the sense that I don’t accept the current status quo — I can see that it’s completely constructed and normalized, and it doesn’t have to be that way.

AM: For our readers who may not know what queer sex is, how would you define it?

SW: I would say queer sex is multiple things. It’s often two same-sex people having sex, but it can also be straight people who have a queer approach to their relationship. They reject heterosexism, they reject the hierarchy between men and women, they understand that men can also enjoy being on the receiving side of penetration, or being tops or bottoms. And women can enjoy a range of things as well.

Queer is also a political position. It’s about sex that is beyond the obsessive fetish of reproduction. Sex that’s about real pleasure for everybody.

AM: What has been your experience with politics?

SW: I was demonstrating since the first time we invaded Iraq in 1991. My parents were very political. I went to a very progressive, student-led school in Seattle, and there I was doing a lot of political work with former Black Panthers and others.

Some people tell me, “You’re not an artist, you’re an activist. Your work is so political; the art world doesn’t have space for that.” My response is that people make art from very different places and historically there have always been artists who make work out of their condition in the world, make work to affect some kind of change. And I happen to be one of those.

SW: Now on the horizon is translating Cliteracy into different languages, and I’m currently looking for additional patrons to support doing an exhibition of it on billboards around New York and the country. I would love to carve the 100 Natural Laws into marble and install the sculpture on the ground permanently, to have it be there for 500 years. I would love for a monument with this type of text and information to exist in a public space.

Awakening to the Power Within, by Eve Steinem