“I don’t know of another play that was inspired by someone and then that someone ends up being in the audience,” Karen Malpede told a packed house on Thursday after the Theater for the New City had just wrapped another production of her latest play which explores the personal lives of scientists who speak out about climate change.

Malpede was referring to James Hansen, the former head of the NASA Goddard Institute for Space Studies who first sounded the alarm on global warming with his 1988 testimony before Congress about the impact of fossil fuels on the planet’s climate. Since his appearance before Congress, Hansen has written numerous scientific papers supporting the conclusion that humans are responsible for global warming. Increasingly frustrated by the political system’s failure to respond to the climate crisis, Hansen has been arrested or cited at climate protests several times in recent years. Malpede’s play, Extreme Whether, which is partially inspired by Hansen’s life, is as much about the courage of speaking truth to power as it is about the destruction of the earth.

The play is set in the wilderness on a piece of land that was left to NASA’s head scientist John Bjornson and his twin sister Jeanne. While John and his lover, who is also a climate scientist, struggle make the American public understand that “humankind is now at the center of a chaos that humankind has caused,” they face skepticism, opposition and even threats from Jeanne and her husband, who are both lobbyists for the fossil fuel industry.  Meanwhile, John’s teenage daughter and his elderly, humorously senile uncle work to clean up their land after they discover that pollution in a nearby pond has caused a frog to grow six legs.

Malpede later told The Indypendent that she focused the story on a family in order to create a more dramatic representation of the debate around climate change. She said that she drew inspiration from Norwegian playwright Henrik Ibsen’s play Rosmersholm, about the role of religion in society, which shares similar themes and plot points with Malpede’s play.

“I saw a brilliant production of Rosmersholm in London in 2008 and was so struck by it. I took some of the names and themes from the play,” said Malpede. “So setting it in the family allows it to become an emotional drama and not just an intellectual battle of ideas. And that’s what I wanted because it’s the emotional drama that moves people.”

The climate change debate certainly transforms the characters in the play. In the first act, John and his fellow scientist tangle with Jeanne and her husband about whether humans are responsible for global warming. However, despite the disagreement, the family bond is still strong. By the end of the play, the gulf between the two camps has grown so wide that they are irreconcilable enemies. The climate scientists also must battle their own self-doubt. In the face of overwhelming criticism and threats, they struggle to find the strength to keep speaking out about the irreversible damage being done to the environment.

When asked by The Indypendent about whether he ever felt like abandoning his effort to save the earth, Hansen said he never considered giving up.

“I never felt like giving up because I have grandchildren,” Hansen replied. “I didn’t realize when I picked the Monarch butterfly to teach my grandchildren about nature that I was possibly introducing them to something that was going to go extinct during their lives. But that doesn’t mean we should give up. There’s still no other planet with life, that we know about, so we don’t give up.”

After the play, Hansen gave a speech followed by a question-and-answer session with the audience, in which he discussed possible solutions to global warming. Hansen said the cap and trade system, which sets a limit on certain pollutants in the Unites States, was ineffective and “hokey.” As he has advocated for in the past, he said the better strategy would be to impose a carbon fee, which would increase over time and would generate money that would be distributed back to citizens, thus winning over conservatives who are always wary of new taxes.

“The solution does need to come from the conservative side because we can’t get the Democrats to keep their hands off the money,” he said. “The conservatives don’t want the government to get bigger. That’s what their afraid of.”

Hansen brought up a recent study by the non-partisan group Regional Economic Models, Inc. (REMI), which found that a steadily increasing carbon fee would generate millions of jobs and cut carbon emissions in half within 20 years. 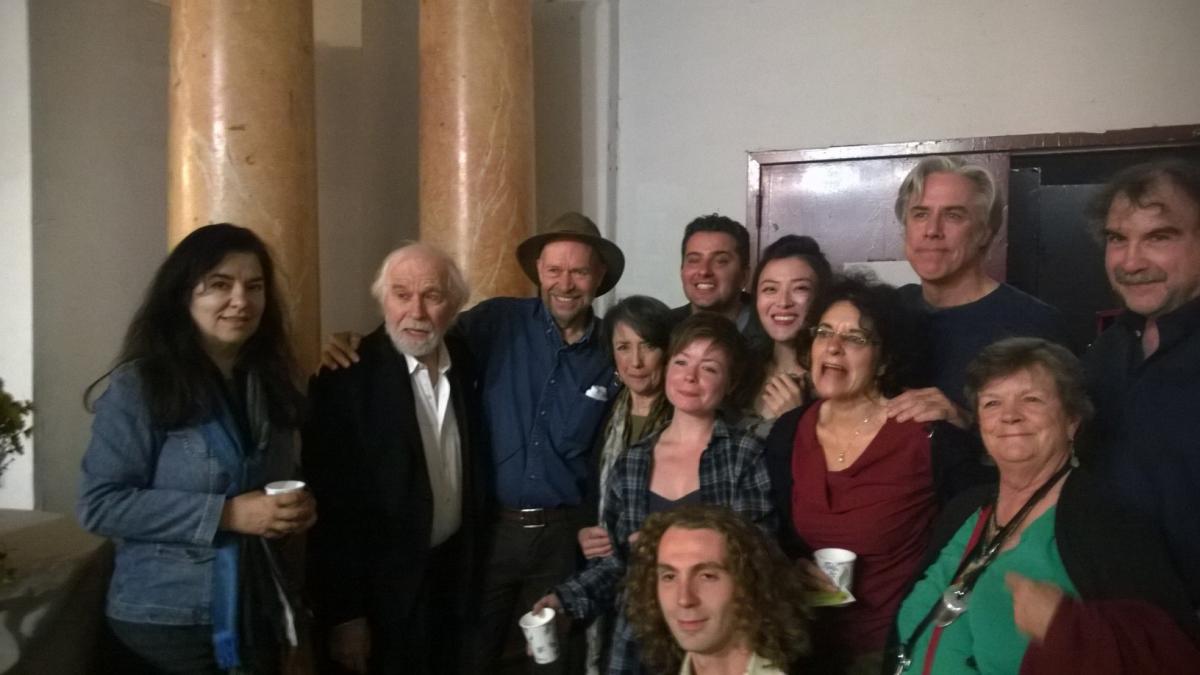 Climate scientist James Hansen with some of the cast & crew from Extreme Whether.

Extreme Whether is playing at the Theater for the New City, Thursday through Sunday, until October 26.