In a city where rents are soaring and real estate is king, this is one of the most deeply felt laments of New York City activists looking to house their organizations, hold public events or just build a deeper sense of community.

For one group in Bushwick, their dream appears to becoming true. In mid-September, after almost three years of dashed hopes, the Mayday community space moved into its new home at the Iglesia Santa Cruz church building at 176 Saint Nicholas Avenue near the DeKalb station on the L train line.

Mayday’s new home features a 700-square-foot art build room and a kitchen on the first floor, three classrooms on the second floor and a 2,700-square-foot “great hall” and kitchen on the third floor. On any given day or night the space can be found bustling with activities: a panel discussion by climate change activists, a build-out of large, colorful banners and props in support of living wage protesters, a meeting for local residents fighting gentrification and displacement, a training on how to secure your laptop from government spying, a Halloween costume party or a ceremony in honor of Indigenous People’s Resistance Day.

“We love this space and would love to stay for years to come,” said Lucas Shapiro, a member of the Mayday collective and one of two part-time paid staffers who helps oversee the space. 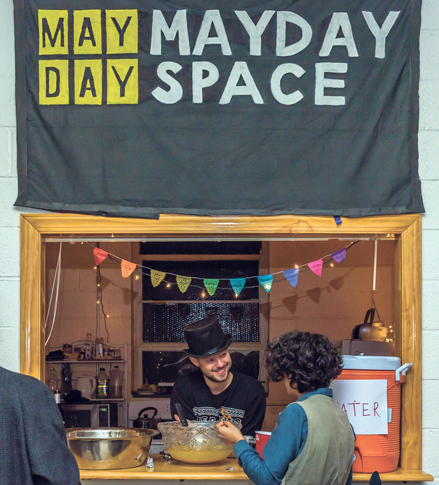 Drawing inspiration from the success of Spain’s “social centers,” the Mayday collective is looking to create a space that is a hub not only for social justice organizing but socializing and hanging out and creating the human relationships that build community. To help achieve that, they are also working to open a bar and event space in another building around the corner that is expected to open by next spring.

Many of Mayday’s key members have previous organizing experience with Occupy Wall Street or the global justice movement of the early 2000s and they say they are determined to learn from their experiences.

“It’s not Zuccotti Park. It’s not the open, ‘anybody do something’ model,” said Sandra Nurse, another collective member and Mayday’s other part-time staffer. “It’s about having a strategy to engage not just the people who show up but the people we would like to have get involved.”

To that end, Nurse said, Mayday has emphasized placing people who were born and raised in Bushwick and people of color in general on the group’s Planning Committee. It also holds regular volunteer orientations for neighborhood residents and hosts monthly community potlucks.

“We want this to be a place where people of color grassroots takes center stage and where people of color feel directly invested in the growth of the project,” said Nurse, who has lived in Bushwick since 2009 and is the founder of BK Rot, a composting service that provides employment opportunities for neighborhood youth.

The Mayday collective made its public debut late in the summer of 2014, when it briefly transformed another neighborhood space into an arts and activism hub in advance of the 400,000-strong People’s Climate March.

“It was amazing to me that so much was happening in one place in my own back yard,” recalls Josh Carrea. He grew up in Bushwick and participated in the anti-displacement and housing justice contingent in the People’s Climate March, in what he describes as “my first introduction to social justice activism and organizing.”

Mayday fell off the public radar after the climate march while its members patiently worked to create internal structures and processes for building their organization. Carrea got involved during that time and continues to take on new responsibilities.

He currently helps with community outreach and wants to launch a neighborhood history project — “The People’s History of Bushwick” — that will invite longtime residents to tell their stories of how gentrification has remade the working-class immigrant neighborhood.

As a member of the programming committee, he plans to start a reading group that focuses on issues of gentrification and immigration that are of special concern to Bushwick residents. Another reading group he’s starting will be led by four women and look at the works of feminist science fiction writers like Octavia Butler.

“It will be something fun to read with important themes of resisting oppression,” Carrea said. 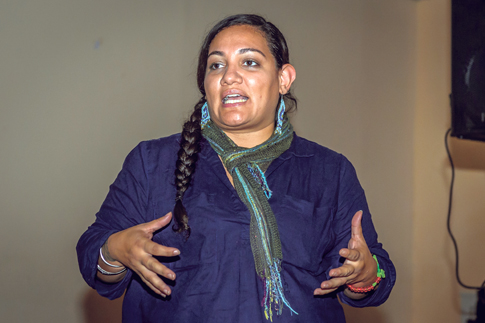 While the People’s Climate March recedes into the past, Mayday continues to embrace the role of artists in promoting social change. The People’s Climate Art Stewards — a group of artists who continued working together after the climate march — uses  the space regularly to build banners and props for a wide range of protests, in the process creating a continuous feedback loop that brings the energy and urgency of the latest protest into the Mayday space and the creativity of that space back into the streets.

“It allows frontline communities to express their voice, it attracts the attention of the media and it allows us to build a much bigger movement,” said Raul Ayala, a Bushwick artist who is a member of the group.

While Mayday’s organizers are busy getting their project off the ground, they sense they are on to something and have high hopes for what it could catalyze beyond the neighborhood they are planting roots in.

“We want to build a model that is replicable around New York City and around the country,” Shapiro said. “We want to see a movement culture that feels much more inviting and relevant to a much broader set of people.”