In Workers’ Cafeteria, a photo taken in 1930 by Ukrainian-born documentarian Arkady Shaikhet, you can barely see the people for all of the light. Bolts of sunlight are streaming in from the large windows, spilling across the tablecloths and floor- boards. It’s a pleasant scene — it looks like a nice café — but the powerful light assumes an almost violent quality, turning all of the assembled workers into silhouettes and shadows.

Themes of energetic force and anonymity come up again and again in “The Power of Pictures: Early Soviet Photography, Early Soviet Film,” currently on view at the Jewish Museum. It’s a good exhibition, tidily fitting years of history into a few galleries. It even includes a small movie theater, with a rotating program of Soviet cinema classics.

The legacy of Soviet art evades easy answers or simple summaries. A totalitarian state run by a censorship-happy central government should, in theory, be absolute anathema to artistic creativity, and yet the USSR made massive contributions to modern cinema and photography, not to mention painting, literature and graphic design, among other fields. Part of this is certainly thanks to the canny abilities of Soviet artists to sneak avant-garde ideas past the censors, but the Soviet leader- ship also embraced elements of the artistic avant-garde. Under Lenin, radically new approaches to making art were encouraged: a revolutionary creative culture to mirror the radically shifting culture at large. Stalin, as you might expect, wasn’t as enthusiastic, but even he valued certain art forms for their powers to advance state-sanctioned ideology. 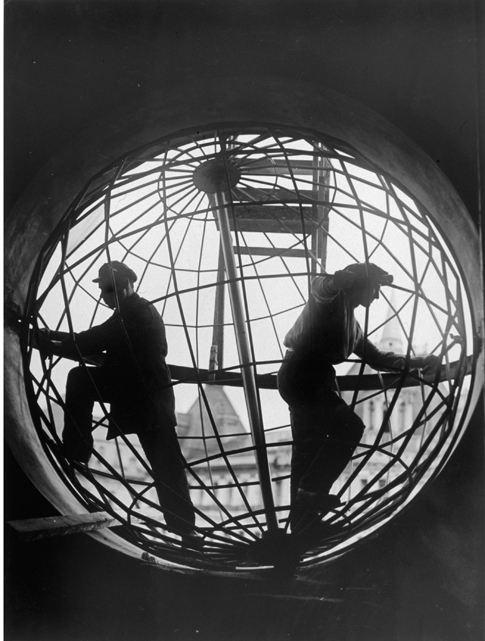 For example, it was Stalin’s push for industrial modernization that led, in the 1930s, to the creation of the FED. A small camera manufactured in large quantities in Ukraine, the FED was meant to give ordinary Soviet citizens the ability to create high-quality photographs, though in true Stalinist fashion, it was named after a murderous police chief and is said to have been produced using forced labor. The exhibition also includes a 1938 issue of the propaganda magazine USSR in Construction devoted to Soviet cinema. By then, the Soviet film industry was the third largest in the world. The magazine features a two-page spread in which an eager crowd has gathered to watch an exciting war film, and floating above them all is Stalin himself, gazing benevolently upon the proceedings and, perhaps, watching the movie as well.

The exhibition tells us that while Soviet photographers under Stalin were increasingly pressured to shoot only subject matter that glorified the state, there were fewer restrictions on how they were to shoot these subjects. Boris Ignatovich’s Bath and Alexander Rodchenko’s Dive (both 1935) each show athletic, virile young men — subjects perfectly in line with the USSR’s common extolling of physical fitness and youthful vigor — but in each shot, inventive framing turns the male body into a compressed, semi-abstracted form. It’s as if avant-garde ideas were straining at the edges of the composition, trying to slip their way into the image. 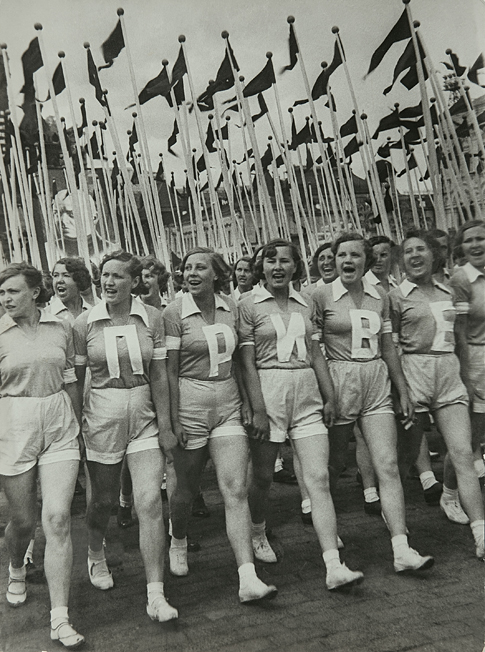 This interplay between idealized representation and creative experimentation can be seen even more directly in photos of the Soviet military. Naturally, Soviet photographers were expected to highlight those qualities that made the Red Army so formidable: its advanced weaponry, dedicated soldiers and sheer size. Images of in- dividual soldiers were eschewed in favor of photos that showed many soldiers grouped into imposing, orderly masses: marching across the Russian countryside, or standing rigidly at attention. Images like these, in which so many individuals are subordinated to a collectivized force, can be read not just as demonstrations of strength, but also as reflections on dehumanization and exploitation.

Georgy Petrusov’s Red Army Soldiers (1939) is carefully composed so that no one man’s face can be seen in full: a sea of outfitted soldiers where stray bits of flesh are quickly lost under waves of glinting helmets. Georgy Zelma’s 1933 images of military parades are cropped in such a way that these arrays of marching men look less like people and more like currents of natural energy; meanwhile, a 1931 Zelma photo shows soldiers dwarfed by a skeletal power line. From a contemporary vantage point, it’s easy to see such images as laments for lost humanity; it feels impossible that at the time, the photographers didn’t intend this, at least somewhat, themselves. Amid these powerful images of athletes, locomotives, cannons and film stars, one may wonder: where are the farmers? One of the show’s most singular images, Shaikhet’s 1925 Lenin’s Light Bulb: Peas- ants Turn On the Electricity for the First Time shows two peasants gladly examining their new, state-issued light bulb. They look bedraggled and tired, and one questions whether the last several years under Lenin have actually made things any easier (to say nothing of the Stalinist horrors to come). It’s for exactly this reason that images of struggling peasants — in all their ordinariness — were discouraged under Lenin and basically disallowed under Stalin. The relative scarcity of such imagery in this show seems to reflect a broader problem with the USSR’s approach to art or, for that matter, the problems of art- making within any censorious, totalitarian system. As with so much in the Soviet Union, leaders marshaled photographic and cinematic creation — with its sweeping, dramatic power and gleaming bright lights — into the service of ‘The People,’ too often leaving actual people struggling, somewhere, in the darkness.