From the discrimination faced by Chinese workers in the gold mines and railroads of 19th-century California to the internment of Japanese-Americans during World War II, the history of Asian-Americans in the United States has been a fraught one. Today, Asians — a category that comprises more than 20 nationalities — are the fastest-growing group of new immigrants to the United States. In her recent photo series “The Model Minority Reality,” photographer Cynthia Trinh invites us to contend with the contradictions of the Asian-American experience. Racism remains rampant — Jeb Bush’s recent remarks about Asian “anchor babies” are only the tip of the iceberg — and beneath the myth of the model minority are wide economic disparities within the Asian-American community, with many people working low-wage and often exploitative service jobs. 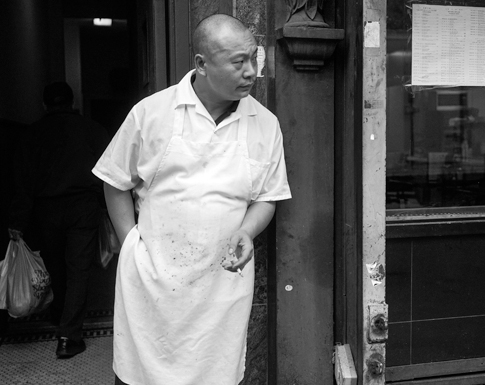 A man in an apron takes a cigarette break. Photo: Cynthia Trinh

In “The Model Minority Reality,” Trinh documents the day-to-day of being a low-wage Asian-American worker in New York City’s Chinatown and Midtown. Trinh herself is Vietnamese-American, and as an intellectual property lawyer who recently left her profession to become a photographer, is personally familiar with the model minority stereotype. She brings this experience to her portraits — they are candid and evocative, depicting Asian-American nail salon workers, cooks, street vendors and store clerks as they make their livelihoods. – Alina Mogilyanskaya

Cynthia Trinh: The project is about Asian-American workers in low-wage service jobs in and around the New York City area. The purpose of my series is to combat the model minority myth, which is the stereotype that all Asian-Americans are successful and wealthy and occupy professional jobs. That stereotype hurts a lot of Asian-Americans who are working hard, low-wage service jobs and struggling to make ends meet, especially those who are immigrants and maybe undocumented. 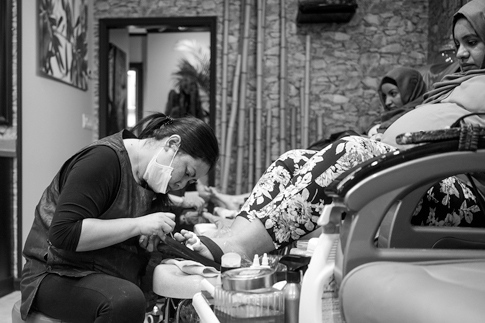 The model minority myth is really insidious. The story behind a lot of the people I photograph and a lot of Asian-Americans is that we are a relatively new population of immigrants, especially the Vietnamese like myself, and we are still figuring out what it means to be American and where we all fit in. This is a story of many, many immigrants and it’s the story of my family, which came here from Vietnam after they were basically kicked out of their homes because of the war. 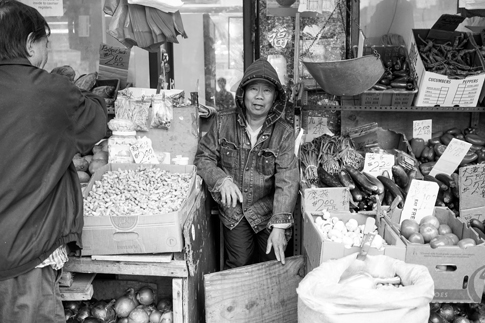 I identify my ethnicity as Asian and my nationality as American. I myself have propagated the model minority myth. I’m highly educated, I went to graduate school and my family created a life here through a lot of hard work, perseverance and family support. Many of my friends have also gone to college and graduate school. A lot of them are doctors, engineers, scientists. A lot of my family is in the sciences: My brother is a chemist. My stepfather, he’s an engineer. My father is an engineer. And like many Asians, that’s because when they came to America the language barrier was hard for them to overcome and so they stuck to math and science because there was less of a language problem there. 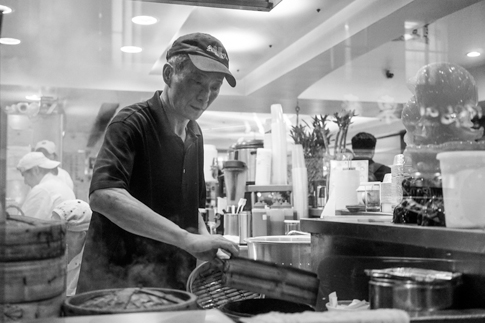 At the same time, I worked from a young age and I have an affinity with the people who work these really hard low-wage jobs because a lot of my family members and friends had to do it. They were or still are nail salon workers, janitors, plumbers. I know how it feels to come here and just do what you have to do to pay the bills and feed yourself and your family. 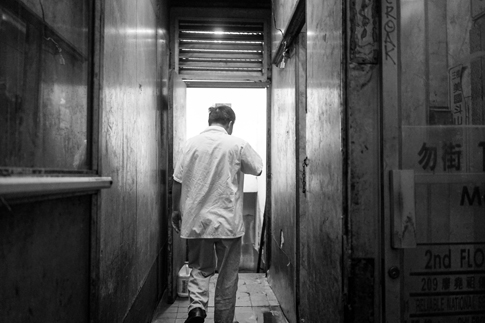 A man heads to his next task. Photo: Cynthia Trinh

What inspired me to do the series was the huge uproar in the community after the New York Times article about nail salon workers came out. It’s as if people didn’t realize that Asian-Americans are oppressed, are struggling and being exploited. It took that story to start the discussion about workers’ rights in nail salons, and it prompted New York to pass a law that basically guarantees fair wages for nail salon workers. But it’s not only nail salon workers. Now it’s time to start discussing fair wages and employee protections in a broader range of jobs. So a lot of my photos portray restaurant workers, street vendors, a whole range of different Asians working in the city in different capacities. I chose the medium of street photography because I wanted the images to be candid: I think it’s really important to see what kind of jobs these people are doing and what they’re doing when they’re at work, how they conduct themselves, how they’re dressed, what they do with their hands, their faces, their wrinkles, the bags under their eyes. I took the photographs mostly in Chinatown and Midtown, and for now they depict mostly Chinese- and Korean-Americans. Later, I would like to expand the series to include other Asian-American communities. 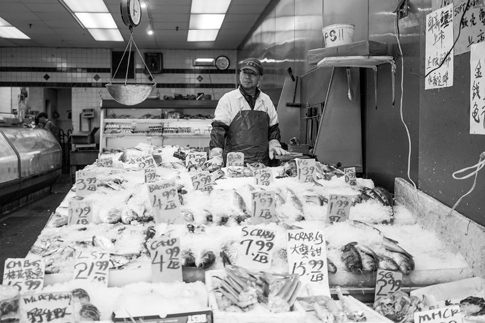 A man sells fish and other seafood. Photo: Cynthia Trinh

When the public thinks of Asians as the model minority, the problems of the Asian-American community are ignored. There’s still a lot of racism but it’s almost never acknowledged. A lot of scholars call Asian-Americans “the invisible race.” I think it’s in part because many people buy in to the stereotype that we’re all successful: On one hand, we’re used as a standard to tell Hispanics, Blacks and other minorities that they should be like us, that they’ll get what they want by working really hard. But on the other hand we’re constantly treated as if we don’t belong in America and criticized for being foreign, for not assimilating into American society. It’s a double standard, and the very real struggles of Asian-Americans are lost within it. 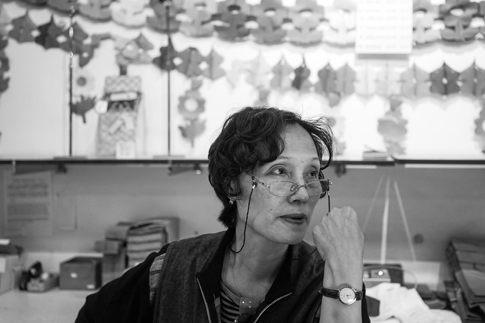 A woman behind a counter peers over her glasses. Photo: Cynthia Trinh

For more on the “Model Minority Reality” project, see cindytrinh.com.