The Democratic debate in Brooklyn last night took an unusual turn when a grumpy old Jewish American upbraided a slightly younger Illinois Methodist for not respecting the dignity of the Palestinian people.

BLITZER [Used to work for the American Israel Public Affairs Committee lobby] : . . . Senator, let’s talk about the U.S. relationship with Israel. Senator Sanders, you maintained that Israel’s response in Gaza in 2014 was, quote, “disproportionate and led to the unnecessary loss of innocent life.”

What do you say to those who believe that Israel has a right to defend itself as it sees fit?

SANDERS [former kubbutznik, i.e. left wing Zionist annoyed by the rise of the far right wing Likud Party]: Well, as somebody who spent many months of my life when I was a kid in Israel, who has family in Israel, of course Israel has a right not only to defend themselves, but to live in peace and security without fear of terrorist attack. That is not a debate.

But — but what you just read, yeah, I do believe that. Israel was subjected to terrorist attacks, has every right in the world to destroy terrorism. But we had in the Gaza area — not a very large area — some 10,000 civilians who were wounded and some 1,500 who were killed.

SANDERS: Now, if you’re asking not just me, but countries all over the world was that a disproportionate attack, the answer is that I believe it was, and let me say something else.

SANDERS: And, let me say something else. As somebody who is 100% pro-Israel, in the long run — and this is not going to be easy, God only knows, but in the long run if we are ever going to bring peace to that region which has seen so much hatred and so much war, we are going to have to treat the Palestinian people with respect and dignity.

SANDERS: So what is not to say — to say that right now in Gaza, right now in Gaza unemployment is s somewhere around 40%. You got a log of that area continues, it hasn’t been built, decimated, houses decimated health care decimated, schools decimated. I believe the United States and the rest of the world have got to work together to help the Palestinian people.

That does not make me anti-Israel. That paves the way, I think…

SANDERS: …to an approach that works in the Middle East.

The Israeli propaganda line is that the Palestinians are natural, intrinsic terrorists who are always attacking Israelis out of blind hatred for Jews and who casually deploy terrorism on a mass scale and refuse to recognize the inexorability and naturalness of several million European and North African and other Jews living in Palestine.

Perhaps Sen. Sanders would not agree with what I am going to say. But this narrative ignores that in 1800 there were virtually no Jews in Palestine. It ignores that the Jewish settlers in British Mandate Palestine derailed British plans for a Palestinian state by 1949 (as put forward in the 1939 White Paper), in accordance with all the other Class A Mandates established at and after the Versailles Peace Conference that ended World War I. That is, the French Mandate of Syria became Syria and Syrians have Syrian citizenship, the British Mandate of Iraq became Iraq and Iraqis have Iraqi citizenship. Even Class B Mandates became independent countries and their inhabitants became citizens– Tanganyika became Tanzania and Zanzibar, Ruanda-Urundi became Rwanda and Burundi. Why did not the Mandate of Palestine result in a state of Palestine in which the Palestinians were citizens? 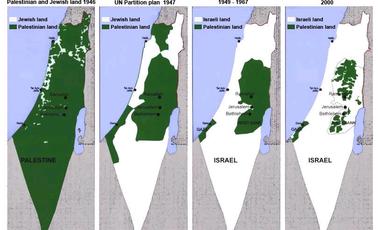 It was because the Jewish settlers let in by British Mandate authorities over the objections of the native Palestinians (whose families had lived there since time immemorial) who conducted an ethnic cleansing campaign in 1947-1948 and expelled 720,000 Palestinians out of 1.2 million, then declared Israel and locked the refugees out. Many of those refugees were forced to crowd into refugee camps in the Gaza Strip, where they still huddle, penniless and displaced and besieged permanently by the Israelis.

The simple-minded Zionist talking point that the British split their Mandate into Palestine and Jordan, and that Jordan is Palestine, is historically laughable and does not answer the question of why the Palestinians don’t have a state of their own and why over 5 million of them are stateless, lacking the rights of citizenship in any state. French Syria was also split into Syria and Lebanon, and everybody got citizenship; this is also true of Ruanda-Urundi, which was split.

Part of what Sen. Sanders likely means by Palestinian dignity is that you can’t have dignity as a human being in the modern world if you don’t have the right of citizenship in a state. Palestinians are deprived of that dignity. There are likely only about 12 million stateless people in the world, and Palestinians are the largest single such group. Not only do Palestinians not have a state and not only are they therefore left without the basic human rights that come with citizenship, they labor under Israeli military occupation

Israel is actively depriving the Palestinians of the right to be citizens of a state. Prime Minister Binyamin Netanyahu actually ran on this platform in the last election in Israel, and won on it.

Sen. Hillary Clinton [whose campaign in part is being funded by billionaire cartoonist Haim Saban, a virulent opponent of Palestinian rights and investor in squatter settlements in the West Bank] responded that Israel withdrew from Gaza (which it occupied in 1967) in 2005, but then was subjected to thousands of rocket attacks, and had no choice but to attack Gaza.

She also alleged that Hamas uses human shields and that therefore Israelis have no choice but to kill women and children.

Neither of these allegations is true. Even if they were, you’re not allowed deliberately to kill women and children and innocent non-combatants in order to get at the enemy.

Israel did not actually withdraw from Gaza. It retains 1/3 of Gaza land as a buffer zone, and routinely shoots Palestinian farmers who own that land and try to farm it. It denies Gaza an airport and a seaport. It even routinely shoots Gaza fishermen. It controls the major checkpoint. It coerces Egypt (with a standing threat of violence) into policing the Rafah checkpoint on the Sinai. It keeps Gaza Palestinians in a large outdoor concentration camp. In a particularly evil and creepy move, the Israeli military even set a calorie limit for Palestinians, including Palestinian children, in Gaza (a limit it has been embarrassed into lifting). Gaza is still occupied, and the UN recognizes Israel as the occupying authority, which lays all the obligations of the Geneva Convention of 1949 on the Israeli state with regard to nurturing the welfare of the people living under its occupation.

Sen. Sanders’ statistics give a good indication of whether Israel is fulfilling its duties under the Geneva Conventions (Conventions that were intended to forestall any more Axis-like aggression and war crimes).

As for configuring the nearly two million people in Gaza, half of them children, as terrorists, usually this discourse is just a form of racism. And although small chemistry-experiment rockets fired from Gaza (often not by Hamas) occasionally do property damage or inflict human casualties, saying that there are “thousands” of them gives a propagandistic impression. All but a handful land uselessly in the desert. All life is precious, but in 2005-2008 in the lead-up to the 2008-09 Israeli assault on Gaza, rockets killed 11 Israelis; in the same period, Israel killed 1,250 Palestinians in Gaza, including 222 children.

Oh, and those towns on which the rockets sometimes manage to fall? They are the home towns of the Palestinians displaced to wretched huts in Gaza, to which they could walk home in an hour or a few hours if they were allowed to.

The biggest problem is actually the future of the Palestinians in Gaza and the West Bank. Are you going to keep them under Occupation forever? Are you going to push them into the Mediterranean and give Europe millions more refugees?

It has been clear for some years that the far-right Likud government’s policies are unacceptable to most Americans, including to most Jewish Americans. Our political class and the AIPAC lobbyists have tried to obscure this truth just as they obscure climate change.

In response to Sen. Sanders’s comments, Jewish Voice for Peace issued this statement:

Rebecca Vilkomerson, Executive Director of Jewish Voice for Peace: “It was heartening to hear the beginning of a much needed conversation about Israel’s disproportionate use of force against Palestinians in Gaza during the Democratic debate tonight. Today showed that the movement for Palestinian rights is shifting the discourse at the highest political levels. However, there is still a long way to go before we see our political leaders take courageous steps not just to recognize the humanity of Palestinians but to take action to secure their rights.”