'"Only in Colombia do we have to vote on whether or not we want to live in peace,” someone posted on Twitter recently, referring to the upcoming referendum on whether to ratify the historic peace agreement between the government of President Juan Manuel Santos and the rebels of the Revolutionary Armed Forces of Colombia (FARC). On Oct. 2, Colombians will go to the polls and answer a simple question with either a “yes” or a “no”: “Do you support the final accord to end the conflict and build a stable and lasting peace?”

At first glance, a yes vote sounds like a no-brainer. The conflict, which began more than a half-century ago, has killed over 220,000 Colombians, most of them poor civilians in the countryside. It has also led to one of the worst internal refugee crises in the world. Despite recent decreases, almost 7 million of Colombia’s 47 million people have been forced off their land to escape the violence — the largest population of internally displaced people in the world, according to the U.N. refugee agency. The conflict also saw thousands of forced disappearances, arbitrary detentions, extrajudicial executions, and cases of torture. Who in their right mind wouldn’t want to put an end to this level of bloodshed and displacement?

While the Colombian and U.S. media tend to point the finger at FARC for these and most of the country’s other ills, the 7,000-member guerilla organization — the largest Marxist insurgency in Latin America — cannot be held accountable for all that violence. Right-wing paramilitaries and their close allies in the state security forces must take more of the blame. But there is no doubt that silencing the guns of FARC and ending the government’s actions against them would go a long way on the road to building some kind of peace in Colombia after a long, tragic history of war.

In late August, after over four years of talks in Havana, the two sides finalized a 297-page peace accord. They hammered out an elaborate five-point agenda addressing many of the root causes of the conflict and the steps that were needed to end it:

The simple yes-or-no choice presented by the referendum does not take into account how the accord will be implemented and the profound divisions that exist after decades of civil war, militarization and politically motivated violence.

Rightwing Opposition to the Peace Accords

Nowhere is the resistance to any agreement with FARC more visible or vocal than in the rightwing political movement founded and led by Sen. Alvaro Uribe Vélez, Colombia’s president from 2002 to 2010. For years, Uribe has been the poster child of an almost fanatical anti-FARC discourse that combines an unapologetic, bloodthirsty quest for vengeance (his father was killed by FARC in 1983 during a botched kidnapping attempt) with a self-righteous political conservatism and iron-fisted security policies. Any critics of his approach became his political enemies, whom he accused of being sympathizers or direct collaborators with what he describes as the “narco-terrorist” FARC.

During his two terms in office, Uribe was often credited with bringing security back to Colombia after decades of military advances by FARC and major defeats for the nation’s military. He rejected the notion that the conflict was political, calling it a war on criminality and terrorism. He cozied up to U.S. President George W. Bush’s administration, and was rewarded with billions of dollars of military and security assistance under Plan Colombia, established by Bill Clinton. His government dealt considerable blows to FARC, reducing its numbers from roughly 17,000 fighters to about 8,000. Much of the top leadership of FARC was either killed or detained, and the number of guerillas deserting increased significantly.

These strategic gains came at a cost in human rights and civilian life. From 2002 to 2008, the Colombian Army was implicated in what became known as the “false positives” scandal, where they detained young civilian men from poor communities in the cities, took them into the countryside, dressed them up as FARC combatants, and executed them on the spot. They converted over 3,000 innocent people into trophy corpses to demonstrate how effectively they were winning the war. The Army commander who oversaw this policy, Gen. Mario Montoya, was a close associate of Uribe, and the president often called him a national hero.

Uribe also carried out a controversial peace deal with the United Self-Defense Forces of Colombia (AUC), the umbrella organization of the paramilitary armies with 30,000 troops that waged a dirty war in the countryside against perceived FARC supporters for more than 20 years. Critics of Uribe’s current opposition to the peace deal with FARC point to the profound contradiction between his rhetoric about “negotiating with terrorists” and letting FARC off the hook with “complete impunity” and the AUC’s unrivaled record of brutality and violence, and the low number of its former combatants who have been held accountable since the demobilization agreement.

That clear double standard has made Colombians increasingly skeptical about Uribe’s public denunciations of his successor’s rapprochement with FARC. That dozens of his closest political allies have been implicated, charged, or arrested for having direct connections to the AUC leadership — known as the “Para-política” scandal — has also diminished the former president’s position.

Despite a long trail of evidence connecting Uribe to the criminality of the paramilitaries, he continues to represent a powerful political force in the country. His constituents re-tweet everything he says as if it were gospel, while the up-and-coming members of his party emulate his rhetoric of righteous indignation and a substantial dose of fear. “We will become another Cuba or Venezuela,” the Uribistas proclaim. “We cannot surrender our nation to communism.” During my recent visit to Colombia, this reminded me of the presidential campaign of Donald Trump.

When the names of the international observers who would serve as civilian guarantors for the demobilization process were announced in July, Uribe warned his followers that President Santos was allowing the Cuban military to occupy Colombian territory, simply because there were several Cubans on the list (along with Europeans, Latin Americans, and representatives from other countries). That lie became headline news for three days. 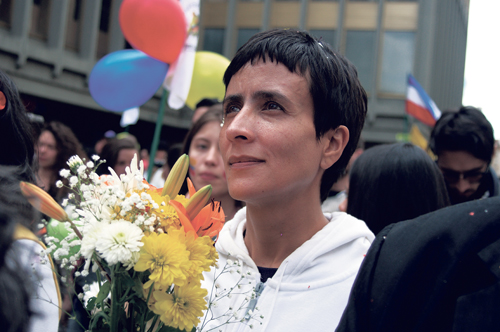 CEASEFIRE: Residents of Colombia’s capital city of Bogota rally in support of a ceasefire agreement between the government and the FARC. Credit: Agencia Prensa Rural.

When President Santos announced publicly that his administration was launching a comprehensive peace process with FARC, he made it clear that “the model was not negotiable.” In other words, while he was ending the direct conflict with the guerillas, he was not going to change the neoliberal economic model of foreign and domestic investment; the expansion of extractive mining industries and single-crop, large-scale agribusiness; and the privatization of state enterprises. Uribe’s alarmist pronouncements that Santos was surrendering the country to communism ignored that from the start one of the goals of the peace process was to make Colombia safe for the corporate globalization of the 21st century. It is not surprising that much of the country’s business class is backing a “yes” vote in the referendum.

That is why a vast cross-section of the country’s popular movement has considerable reservations about the accords, despite wholeheartedly supporting the end of the military conflict between the state and FARC. Their refrain is essentially “yes” to the peace process, but “no” to the policies of the political and economic establishment.

Under the rubric of the Agrarian Convergence, this growing popular movement recently carried out a 15-day nationwide strike, spearheaded by the indigenous movement, but also including Afro-Colombian groups, peasant-farmer confederations, and the trade union movement. They’ve criticized the government’s widespread privatization decrees in the countryside, its policies on agricultural development, and its issuing of sweeping mining concessions to domestic and multinational energy companies, including some in indigenous territories.

Despite the government’s commitments in the peace accord to follow development policies that would respect the autonomy of rural communities, its long record of failing to fulfill agreements with social movements gives them little hope that things will be any different in a “post-conflict” Colombia.

The government’s response to protests has been fierce. In the last several months, it has used its special police forces to confront the mass mobilizations head-on and to forcibly dislodge indigenous protesters carrying out acts of resistance in several departments. There has also been an increase in politically motivated attacks against social-movement and human rights activists. According to the human rights group Somos Defensores, at least 35 human-rights and social-justice activists around the country were killed in the first six months of this year, and dozens were arbitrarily detained. These were not heavily reported by the Colombian media.

Notwithstanding these reservations, the end of the conflict with FARC is an important step forward in Colombia and should be recognized as a historic achievement by the warring factions who sat at the table for all these years, despite the naysayers and fear-mongers. Now the accord goes before the Colombian people to get the political stamp of approval that President Santos felt was necessary. The peace deal will only be ratified if the “yes” camp passes the arbitrarily established threshold of 4.4 million votes, or 13 percent of the electorate.

Mario Murillo is a professor of radio, television and film at Hofstra University, and is author of Colombia and the United States: War, Unrest and Destabilization (Open Media Books, 2003).