Heather Reilly rushes up, out of breath, waving a selfie with Jeremy Corbyn on her phone. The 25-year-old lawyer got the snap as Corbyn did the rounds of the stands in the exhibition hall on day two of the Labour Party conference on the Liverpool docks.

"I see the effects of the bedroom tax and cuts to welfare every day — it breaks my heart," she says. "Jeremy is the only politician who represents the end of austerity, that’s what’s so exciting about him."

This is her first Labour Party conference. She doesn’t just identify with his policies, she thinks he can win. "My brother’s 16 and he can’t wait to vote for Jeremy in 2020. He has engaged a whole new generation of young people that will hopefully vote Labour for the rest of lives."

For all his unpopularity among his own parliamentarians, Corbyn has swollen the Labour ranks by over 400,000 — making this the largest party in Western Europe

Corbyn’s superstar status since his re-election as Labour party leader with 62 per cent of the vote, two days previously, has also spread to other members of the shadow cabinet. I overhear an older Labour party member whisper to a friend with reverence: "I touched John McDonnell! He said thank you." 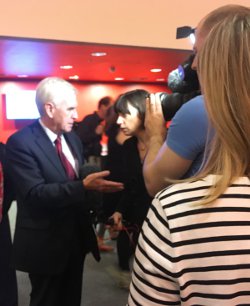 But if some are still in the first flush since Corbyn’s surprise election to the party last year, others are settling down to make the relationship work.

The mood on the conference floor on Monday among the party faithful — even those that voted for challenger Owen Smith —seemed to be more of relief that the bitter leadership contest is settled, than rancor.

Retired engineer Tony Lees, the chair of the Constituent Labour party in Maldon Essex is sitting quietly after a ‘shake up your branch meeting’ training session. He voted for Smith, but bears Corbyn no ill will.

"I’m not about to resign from the party,’ he says. ‘Corbyn’s principles are fine and genuine. I was disappointed that MPs don’t support him more."

He has seen Labour party membership double over the past year to reach 300 in Maldon — a solid Conservative stronghold since 1955 – but regrets that meetings seem to be stuck at 30. He’s taking a practical approach, planning on attending another session on "retaining, engaging and inspiring" new members later this afternoon.

And the new members continue to flood into the party. For all his unpopularity among his own parliamentarians, since Corbyn became leader in 2015, he has swollen the Labour ranks by over 400,000 — making this the largest party in Western Europe.

One of these new members is Mika Minio Paluello. She has spent the last 15 years involved in climate change and anti-war activism and has come to the conference to influence energy policy.

"I used to feel that decision-making processes in the party were very top down and hierarchical. Trying to influence Labour felt the same as putting pressure on the Tories," she says. "Now it’s different, there’s a lot more openness. It feels like we should seize our opportunity."

She is also now a branch officer for Walthamstow, breathing new life into meetings with film screenings and debates. "Meetings in Walthamstow used to number less than 10. Now we have 50 people plus."

Up the road at the World Transformed event organized by Momentum — the grassroots group that has sprung up in support of Corbyn — there are queues snaking round the block for sessions to debate Proportional Representation, tackle austerity and re-nationalize the NHS.

The festival is run like clockwork by young graduates in blue T-shirts. There’s not a Socialist Worker paper in sight.

Labour Party members and activists are rubbing shoulders — a slip stream, a new space has opened up in the wake of Corbyn’s renewed mandate.

The media has cottoned on, they’re here in force — the Guardian, Independent, Spectator — an unusual sight at an activist fringe event. With a Trot exposè proving elusive they are running humorous pieces on left wing paraphernalia, and, maybe, just maybe, starting to take this movement seriously.

"In the past, it used to be people protesting outside the conference," muses Colin Chalmers from Twinning Against Austerity at a Spanish tapas bar across the road. "Now there’s a new generation of activists who are joining the Labour Party. This is something new."

"People are talking to each other," agrees Hilary Wainright, the editor of Red Pepper magazine. "There is a new level of confidence to bring about change."

This enthusiasm is also felt on the streets of Liverpool. "I really do think Corbyn could get Labour elected, there’s an unbelievable amount of older people who are rejoining," says taxi driver Brian Harding.

He believes Corbyn’s anti-austerity message is starting to be heard by the people on the hard edge of Conservative cuts. "All you’ve got to do is look at the food banks. I’ve known people who’ve gone days without food so they can feed their kids," he says. "Seeing Jeremy has given people hope – it’s something different. That’s what people have wanted for years. And they are starting to fight back."

The young lawyer Heather Reilly expects MPs hostile to Corbyn to fall in line. "They’ve had their say but the members have spoken. The backstabbing has to stop."

This doesn’t feel like a protest party — the accusation leveled at Corbyn by his critics. This feels like a party coming of age, in metamorphosis — a party of possibility.

This article originally appeared in The New Internationalist.