STANDING ROCK SIOUX RESERVATION, North Dakota — Indigenous People’s Day in Oceta Sakowin began before dawn with a loudspeaker car driving through the camp urging everyone to “rise and shine; it’s a good day to protect the water.” The speaker encouraged “all my relatives” to gather at the south end of the camp on the Standing Rock Sioux Reservation for a prayer to the sunrise. 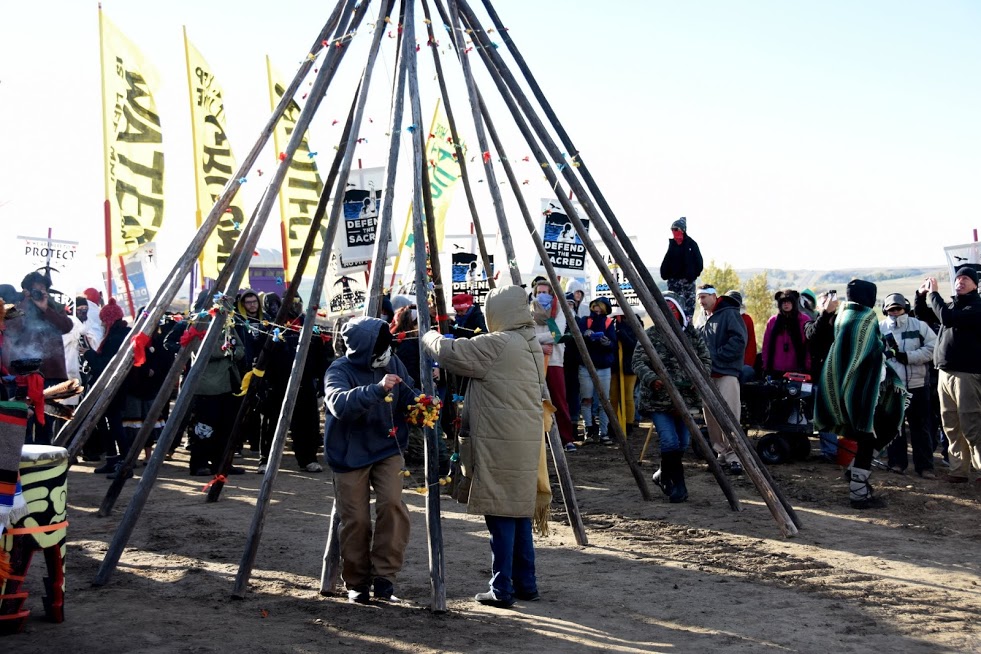 Oceta Sakowin is one of several encampments in the area that have drawn thousands of people who seek to prevent further construction on the Dakota Access Pipeline. Calling themselves “protectors” rather than protesters, they are trying to prevent the pipeline from crossing under the Missouri River, which is the water supply for 17 million people. They point to the many instances of pipelines leaking, rupturing, and even exploding, with disastrous effects on the environment, as well as the need to stop further extraction of oil and move to sustainable energy sources and conservation in order to prevent catastrophic climate change on the planet.

At Oceti Sakowin, 100 people stood in the chilly morning darkness taking part in prayers to the sunrise, to the four directions, and for the lighting of the pipe, which was shared around the circle. This was followed by an announcement that a federal appeals court had denied the Standing Rock Sioux’s emergency motion for injunction to halt the construction of the pipeline near the reservation. “These corporations are greedy. These corporations have taken over our political process,” said one Native speaker at the prayer service.

He called on people to bring cars to the southern exit of the camp, from which a caravan of some 50-60 vehicles made its way to nearby construction sites. Further down the path of the pipeline, several people had been locked down to construction equipment since 5 a.m. The caravaners were prevented from getting that far by roadblocks, so they parked by the road and walked in along the pipeline route about 100 yards from the road to a spot where tipi poles had been set up. 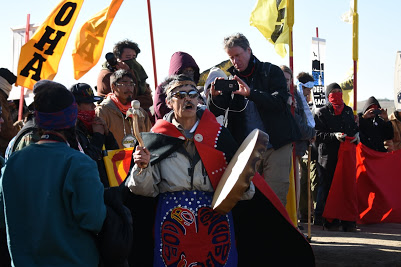 Dancers from “our cousins to the south” performed for the protectors. It was announced that “the eagle and the condor are united” and two people wearing enormous eagle and condor masks were invited to join another dancer and singer. Women wrapped the bare tipi poles in garlands of colorful little pouches of tobacco.

Meanwhile, across the field police wagons began arriving. Soon, a line of police vehicles three rows deep lined the road nearby. About 100 cops in riot gear marched in to the area and those who could not risk arrest began to move back from the area. About a dozen people remained in the tipi. The police formed a line in front of the tipi and began marching forward, pushing the “unarrestable” members of the crowd back toward the road. As the police moved forward, they announced, “Touch us, and you are under arrest.” Several people who didn’t move out of the way fast enough were arrested when the cops walked into them. Another, who found himself behind the line because he emerged too late from using a port-a-potty at the site, was also arrested.

The crowd regrouped near the road with a line of cops in front of them. The dancers continued their presentation, and the crowd chanted “Mni wiconi—water is life!” and “What do you do when your land and water are under attack? Stand up! Fight back!” Members of the Youth Council spoke on bullhorns, urging protectors to be peaceful and not to taunt the police, while also explaining that we all need water to live, and that the protectors were doing this for the cops’ children too. “You can’t drink oil! Keep it in the soil!” they said.

Eventually, all the protectors in the tipi, including Tarak Kauff and Matthew Hoh of Veterans For Peace were taken into custody.

The remaining protectors, who said they had wanted to make sure that the arresting police remained peaceful, returned to their cars and the long caravan made its way back to the camp. 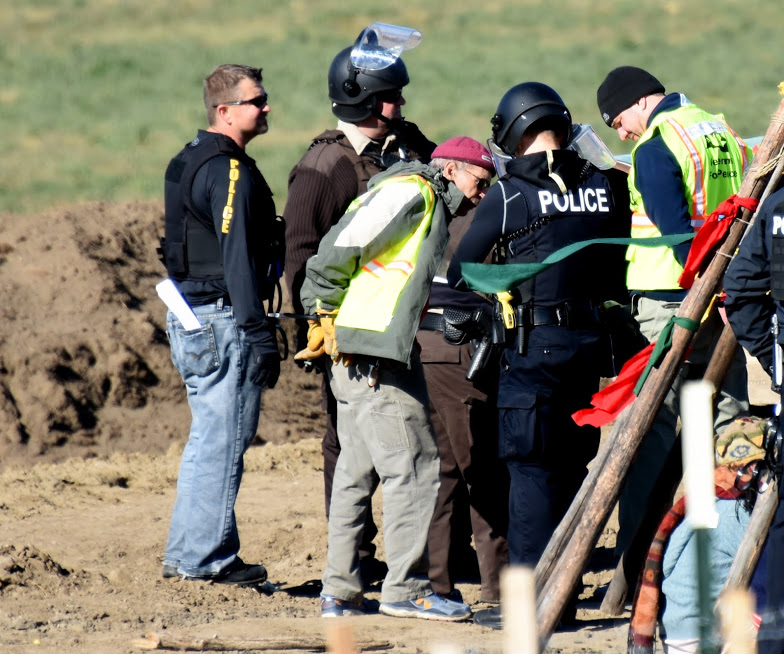 As of this writing, 29 people were reported arrested, including two individuals who locked themselves to the construction equipment. Those two face charges of criminal trespass and reckless endangerment for putting the police at risk when they cut the protectors loose from their lockdown. Despite the peaceful nature of the protest, the other 27 arrestees have been charged with criminal trespass and engaging in a riot.

“This was a riot,” Cass County Sheriff Paul Laney at a press conference. “When you have that many people engage in that kind of behavior, inciting others to break the law, cheering others on as they do break the law, refusing to leave when they're asked to leave – that's not a protest,"

Yes, Indigenous People’s Day is a good day to protect the water.

Alternate National Anthem: As Performed by the Veterans For Peace Chorus