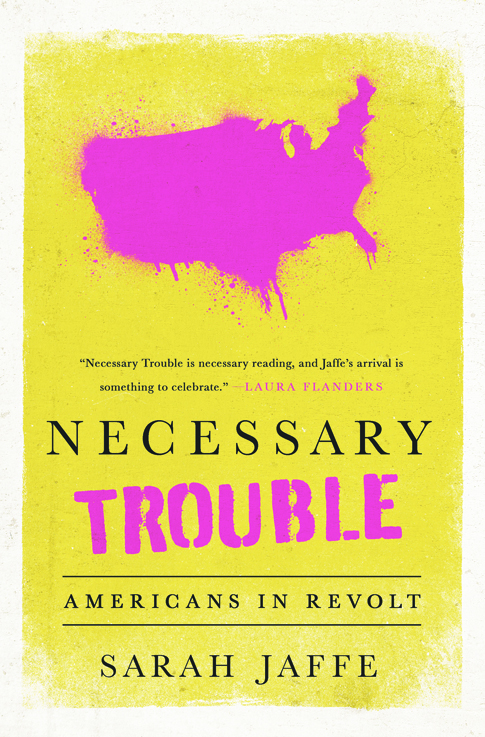 One might be tempted to read Sarah Jaffe’s book with a kind of archaeological nostalgia, to look upon it as a remnant of a bygone-era when the left had confidence in the gains it was making, before a meteor named Trump struck earth.

But the people Jaffe describes don’t have to become fossils buried beneath the sediment of the nascent Trumpian-era. The struggles her heros and heroines face prefigure future battles to come.  Writing from the not-so ancient times of pre-election America in 2016, Jaffe offers example after example of what ordinary people can do when pushed too far and the Trump White House will likely push most of us to our limits.

Necessary Trouble: Americans in Revolt is chockablock with stories we can learn from of ordinary Americans who have just about all they can bear.  Shaken out of complacency and resignation they rise confront the social problems affecting their lives.

They were moved first to make changes directly around them, at work, in their communities, and their cities, but their increased involvement in activism broadened their horizons. It led them to think beyond the scope of their immediate interests, to seek common ground and work with others struggling with distinct but overlapping troubles. Jaffe’s vivid narrative outlines the transition from the personal to the political. The people she profiles were moved by experiences of intimate and communal loss to confront a social and economic system that is long past its sell-by date.

The book’s snappy title comes from an interview Jaffe conducted in 2013 with Rep. John Lewis (D-Ga.), a leader of the Student Nonviolent Coordinating Committee during the 1960s civil-rights movement. Lewis said that election activity was just one part of the process of social change. Activists, he insisted, need to find “a way to get in the way,” to “get into trouble, good trouble, necessary trouble.”

The book, to its credit, isn’t a simple rhetorical call to “unite and fight,” though it could be read as a faithful diary of protest. It charts the struggles of dozens of hard-working, mostly young and neophyte activists who sought to right social wrongs in the years following the 2008 Great Recession — to end police murders of African-Americans, to clean up toxic dumpsites, to restore their labor unions. The Walmart employees Jaffe profiles took their grievances not just to individual store managers but to the company’s home office in Bentonville, Ark.

Jaffe clarifies murky terms like “horizontalism” and “intersectionality” by showing how they operate in practice within protest organizations. Leadership can be both diffused and effective, she illustrates. Class and identity are not at variance, but indissolubly entwined.

Her sketch of the Labor Religion Coalition of New York State is one example of the intersectional nature of struggle. The ongoing battle to end the school-to-prison-pipeline teaches activists from the diverse groups in the coalition that ending mass incarceration requires living-wage jobs.

Surprisingly, Jaffe has some kind words for conflicted Tea Party members who don’t buy the Republican claptrap that unleashing business from regulation will raise all boats or that corporate leaders are job producers.

Will those Tea Partiers come around to fight for social justice someday? Is wondering about that overly optimistic? Blind to the dangers of the coming Age of Trump?

Perhaps, but we knew a Clinton administration would be no springtime in paradise. Neoliberalism is an uninspiring alternative to Trumpism, and the neoliberal order is cracking up, even if it is doing so in a manner few imagined possible. A finely written book such as Jaffe’s is not just a palliative of hope: The stories she reports of people building power through struggle offer a healthy direction forward.