When a far-right conspiracy theory involving the Clintons, pizza, and a supposed child sex-trafficking ring led to a shooting incident in December, I knew it was time to talk to The Indypendent’s readers about pizza.

When Edgar M. Welch, a 28-year-old father of two and certifiable moron, decided to investigate the “Pizzagate” conspiracy, he showed up at Comet Ping Pong in Washington. A trendy pizzeria and ping-pong parlor on the city’s leafy northwestern edge, it was the alleged hub of the Clintons’ child-trafficking operations. Like all great detectives seeking to expose criminal activity, he fired off his AR-15 the minute he walked in the joint. Luckily, no one was injured.

“I just wanted to do some good and went about it the wrong way,” Welch apologized after he was arraigned for assault with a deadly weapon. “The intel wasn’t a hundred percent.”

That is perhaps the understatement of the century. Comet Ping Pong is not alone. The conspiracy theorists claim that the words “cheese pizza” in leaked emails from John Podesta, Hillary Clinton’s former campaign chairman, were code for “child pornography.” Roberta’s, an upscale pizzeria in Bushwick, has been the target of related threats.

“The more I dig those emails and new findings,” one online commentator remarked about Roberta’s, “the clearer it gets…. Most of those so-called elites made a cult out of pizza. Disturbing indeed.”

Anyone who has seen the photos of Donald Trump and Sarah Palin eating Famiglia’s pizza with knives and forks knows the elites wouldn’t even know where to begin making a cult out of pizza. They don’t even know how to eat it.

But it seems the forces of ignorance and bigotry that Trump has brought to the fore are not content with just going after Muslims and immigrants, women and gays. Like ISIS lopping the heads off the idols of ancient dynasties, they have launched an attack on pizza, a divine delight that represents what is truly great about our sad and confused nation.

First brought to New York at the turn of the 20th century by Italian immigrants who were considered dirty and politically suspicious by the American jingoists of the day, pizza is now a quintessential part of the American diet.

“[A] very simple dish, invented as a filling fast meal for the poor of the teeming city,” Elisabeth Luard remarked on pizza’s Neapolitan roots in her classic, The Old World Kitchen; the Rich Tradition of European Peasant Cooking. Quick to prepare and easy to eat on the fly, pizza thrived in our own teeming city of immigrants. It spread like marinara across the country.

Like the American dream itself, the surface of a pizza is a wide-open canvas. Let’s make pizza again. Make it yourself, share it with friends, and give New York’s great pizza houses your patronage, before Famiglia becomes our only option.

For help, I’ve reached out to Scott Wiener, who runs tours of New York’s oldest and finest pizza establishments, and is listed in the Guinness Book of World Records as having its largest pizza-box collection. (Visit scottspizzatours.com to book one, or check out his book Viva La Pizza! The Art of the Pizza Box to delve into the nerdier subculture surrounding pizza.) He’s provided a list of some of New York’s best pizza-by-the-slice establishments, along with a simple dough recipe you can whip up at home. I’ve also included a basic marinara recipe and a few additional tips that will help put you on the road to becoming a master pizza chef.

Where to Find the Perfect Slice 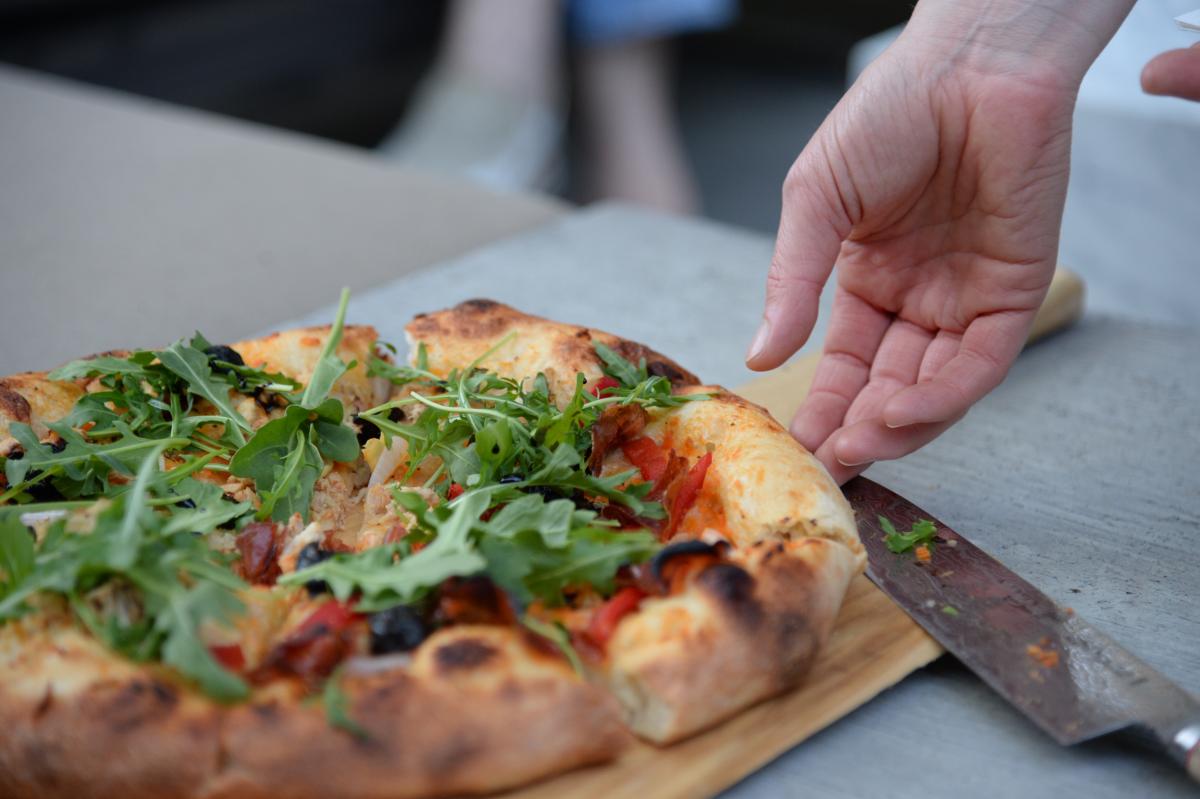 Meticulous bakers measure the weight of their ingredients. If you’re going to go all out, you might want to invest around $20 in a kitchen scale. It’s perhaps more important to be mindful of the dough’s consistency. With some breads, such as focaccia (a precursor to pizza) or no-knead bread, you’ll want a wet, sticky batter. Pizza calls for a smooth ball of dough that expands back into form when you poke it with your pointer finger. If your dough is too wet, add more flour; too dry, add water a spoonful at a time.

Mix flour, yeast, salt and water. Let rest 30 minutes. Add olive oil. Knead until springy, then split into four pieces, each weighing 290 grams (or as close as you can get). Store in lightly oiled containers overnight in the fridge. DONE!

2 tbsp of oregano, or more to taste

Salt and pepper to taste

Add oil to a skillet over medium heat. Add garlic and red chili flakes. When the garlic becomes fragrant, in about one minute, add tomatoes and all the juice with them from the can. The tomatoes will cool the skillet, so turn the heat up. Allow the mixture to come to a boil. As it does, stir in oregano, a couple dashes of salt and a sprinkling of pepper. Reduce heat and allow to simmer for about 10 minutes, stirring and tasting occasionally. Season with more chili flakes, oregano, and salt and pepper to your liking, as you go. The tomatoes will gradually break down and dissolve. This makes a thick marinara. For a thinner sauce, add a ½ to 1 cup of water in with the tomatoes.

A word about toppings

Choosing quality ingredients goes a long way with pizza. For cheese, I recommend sticking to the classic: fresh mozzarella, the kind that comes in a ball you can effortlessly peel apart. (There are vegan substitutes that, I’m told, come close.) Colby and cheddar will yield a similarly gooey-chewy consistency.

It is tempting to load your pie with marinara, cheese and other toppings, but it’s better to err on the side of restraint, or else you might have a soggy, undercooked pie on your hands.

The key to the solid, crisp crust and sizzling cheesy top that makes a perfect pizza is heat, a hard thing to duplicate in domestic ovens. You can get around this by using a cast-iron or otherwise oven-safe skillet. The blister on my left hand as I type this reminds me to warn: Be careful not to burn yourself!

Preheat oven to 500 degrees. Lightly brush skillet with olive oil. Roll pizza dough into a disk 12 to 15 inches wide, depending on the size of your skillet. Once your dough is snugly on the pan, add toppings and turn up the burner to high heat. You might have to shift your pan here and there over the burner to ensure even cooking. After about 2 to 4 minutes, the dough will begin to bubble ever so slightly, and the cheese may begin to gently melt. Faint plumes of smoke will begin to rise from the pan. Don’t be alarmed. Give the pizza another 30 seconds on the burner, and transfer to the oven on the skillet. When the dough has risen and turned golden brown, and the cheese has melted — about 10 minutes — remove the pie from the oven. (This is the perfect moment to toss arugula or fresh basil on top.) Let rest about 5 minutes. Slice. Dig in.

The Trump administration loves ‘alternative facts’ and hates a free press. Your backing keeps us strong. Become a subscriber or a monthly sustainer today and show your support for independent media.