SAT SEP 23
7:30PM–11PM • $5–$10 DONATIONS
TALK: THE RAMAPOUGH VS. THE PILGRIM PIPELINE
Speakers from the Ramapough Lenape Nation and Science for the People will lead a discussion on the devastating potential impacts of the proposed Pilgrim Pipeline on sacred lands and the Ramapo River, as well as specific political actions supporters can take. Drinks and mingling in the backyard of Unnameable Books will follow. Proceeds go to the Ramapough’s legal fees.
Unnameable Books
600 Vanderbilt Ave.

TUE SEP 26
6:30PM–8:30PM • $10 DONATION
HISTORY: TRUMP WALKING TOUR
Prior to becoming president, Donald Trump played an integral role in shaping the modern landscape of New York City. Exploring Midtown Manhattan, we are able to get the full spectrum of the Trump story and his rise to power. Register at socialjusticetours.com.
53rd St. & 6th Ave.

FRI SEP 29 THRU FRI DEC 22
6PM–8PM, WEEKLY • $95–$125
CLASS: FRIDAYS AS IN MURDER
In traditional hard-boiled and crime novels, women either provoke violence as femme fatales or need protection as paying clients or wandering daughters. Some authors were dissatisfied with this convention. Drawing upon the potentials of pulp fiction and film noir’s formula of restlessness, dread and discontent within social corruption, women novelists subverted the genre to explore early feminist and political themes. To learn more, view the reading list and register, visit marxedproject.org.
Brooklyn Commons
388 Atlantic Ave. 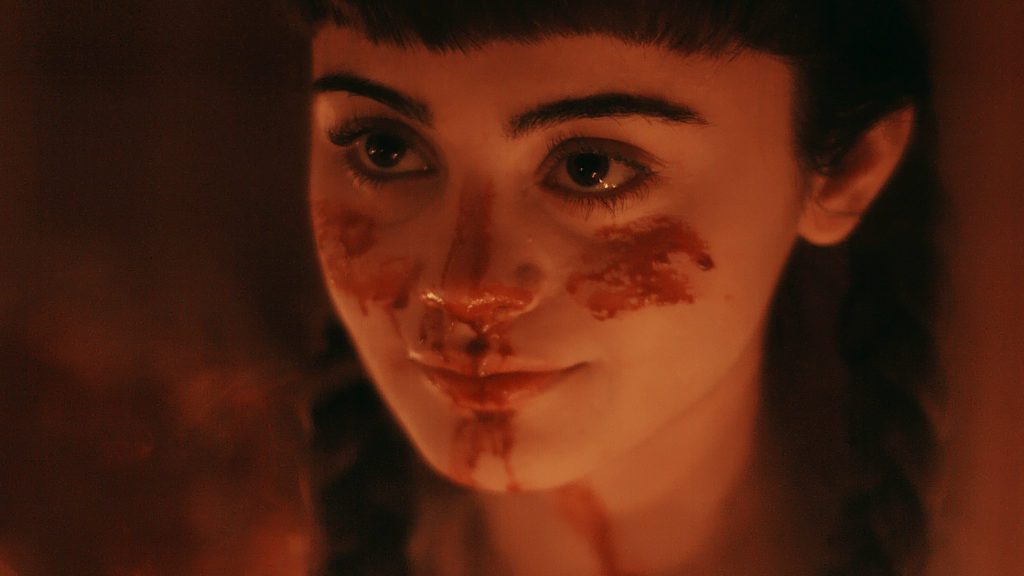 BLOOD PRESSURE: Set your heart pounding at the Brooklyn Horror Fest this October. The Book of Birdie, which features an all-female cast performing in some truly bloody scenes, is making its North American premiere on Oct. 15. Film still courtesy of Brooklyn Horror Fest/Melancholy Star.

SUN OCT 1
11AM–7PM • FREE
PROTEST: VISIT A GUN SHOW WITH GAYS AGAINST GUNS
Join Gays Against Guns as they visit a gun show near the New York metro area. The group attends gun shows to spread awareness about gun violence and disseminate information that people who are purchasing or own firearms might not already know. The group will be disembarking from the LGBTQ Center in Manhattan.
LGBTQ Center
208 W 13th St

WED OCT 4
6PM–10PM • FREE
FOOD: SLICE OUT HUNGER’S $1 SLICE NIGHT
Slice Out Hunger is a culinary charitable celebration that’s a win-win for everyone: All slices of pizza are one dollar and all profits go straight towards the charities Sylvia Center and City Harvest.
The Shrine Church of Saint Anthony of Padua
154 Sullivan St.

THU OCT 5
6PM–8PM • FREE
TALK: CRIMINALIZING POVERTY
It’s been four years since courts determined that New York City’s “stop-and-frisk” policy was unconstitutional, but communities across the city continue to be subjected to “broken windows” policing. Join the Brooklyn Community Bail Fund for a discussion of how community organizations are fighting back against the criminalization of poverty. Panelists Josmar Trujillo with the Coalition to End Broken Windows and Alyssa Aguilera with VOCAL-NY will speak with Brooklyn Law School professor Jocelyn Simonson. Doors open at 6 P.M. Register at eventbrite.com.
Brooklyn Historical Society
128 Pierrepont St.

SAT OCT 7
1PM–4PM • FREE
Film: IF ONLY I WERE THAT WARRIOR
If Only I Were That Warrior, a prize-winning documentary focused on Italy’s 1935 occupation of Ethiopia and what people choose to remember and conveniently forget. Director Valario Ciriaci will be present for a Q & A.
Mulberry Branch Public Library
10 Jersey St.

MON OCT 9
6PM–9PM • FREE
EXHIBITION: “Behind These Prison Walls”
Former Rikers Island corrections officer, visual artist and author Lorenzo Steele Jr. takes viewers into the nation’s most violent adolescent jail on Rikers Island. Lorenzo uses photography and a personal testimony that offers a visual journey into the “Bing,” Riker’s adolescent solitary confinement unit. All images on display were taken between 1987 and 1999, one of the most violent and brutal eras in Rikers Island’s history.
The Living Gallery Outpost
246 E 4th St.

TUE OCT 10
6:30PM–9:30PM • FREE
BOOK LAUNCH: The End of Policing
Join Alex Vitale for the launch of his new book The End of Policing and a conversation with a panel of activists about how the book relates to their organizing work to end police violence. The discussion will be moderated by Sarah Jaffe.
Verso Books
20 Jay St.

THU OCT 12 thru SUN OCT 15
VARIOUS • $13–$18
FILM: BROOKLYN HORROR FILM FEST
Come celebrate the art of horror filmmaking at a festival focused on cinema that pushes the genre’s boundaries and challenges its preconceptions. Visit brooklynhorrorfest.com for tickets and more info on the full lineup of premieres, parties, food, drink, blood and guts.

THU OCT 12
6:30PM–9:30PM • FREE
PODCAST: SEEING RED: ON THE CENTURY OF THE RUSSIAN REVOLUTION
The Russian Revolution took place 100 years ago this year! Join the Brooklyn Institute for Social Research for a live recording of its podcast. This event will feature a panel of Brooklyn Institute faculty including Asma Abbas, Anthony Alessandrini, Ajay Singh Chaudhary and Rebecca Ariel Porte, reflecting on the resonance of 1917.
61 Local
61 Bergen St.