There’s an old adage in journalism: The most interesting stories aren’t told in the newsroom, they’re the ones that reporters tell each other privately at the bar after work. Shrinking this gap — between what reporters know and what they are allowed to tell the public — amounted to Nick Denton’s founding ethos for his former website Gawker. And it increasingly looks like media gadfly Michael Wolff followed the very same strategy for Fire and Fury, his new, behind-the-scenes account of the chaos, incompetence and dishonesty of the Trump White House.

To be clear, Wolff has a long track record of sloppy reporting, incorrect facts and outright fabulism. This book neatly fits into this canon; in its prologue, it offers a sweeping disclaimer jettisoning much of what would be standard journalistic due diligence. Not surprisingly, mainstream reporters have already found sloppy errors.

What is undeniable, though, is that Wolff sweet-talked his way into Trump’s good graces — and, by extension, the White House — by cannily bashing mainstream media coverage of him last year. As a result, Wolff claims he was able to conduct more than 200 conversations with top Trump White House insiders (he claims to have dozens of hours of recordings), many of whom gave him damning, on-the-record quotes betraying their fear, loathing or some combination of the two for the man currently occupying the Oval Office.

The media maelstrom that has arisen from the book’s juicy quotes even prompted a bungled attempt by Trump to enforce prior restraint over its publication — it only served to drive sales through the roof — and transformed the president’s former top adviser, Steve Bannon, into persona non grata in the White House.

Wolff’s book reads like the inverse of much of the daily coverage of this White House by the corporate media.

But what’s most striking about by Fire and Fury is the frank admissions of those closest to Trump about his incuriosity, dishonesty and general lack of fitness for the most important job in the world. Like the stories between reporters in the bar, Wolff’s book not only dishes the dirt, it names names, too. While some of the figures quoted have made strenuous denials — for his part, Bannon only claimed his highly embarrassing comments about Trump’s family were mischaracterized after the president publicly humiliated him — many have been notably quiet. Pundits and reporters have often noted that individual events in the book may not be true, but that the overall tenor of the book feels truthful.

Wolff’s book, in other words, reads like the inverse of much of the daily coverage of this White House by the corporate media — for both good and ill. It eschews concerns about ongoing access and avoids delicate euphemisms. Instead, it presents a burn-every-bridge, no-holds-barred portrait of an insular, TV-addled president completely at sea in his job,  surrounded by scheming grifters trying to manipulate him. In short, a president and presidency in crisis.

Noting the contrast in tone between Wolff’s swashbuckling account and the sedated tone of most White House coverage, 538’s Nate Silver tweeted:

…the reason is that it’s a bit liberating to read work from a journalist who doesn’t expect to have an ongoing relationship with his sources. He lets down the fourth wall; there’s more candor and less obfuscation. Everything’s in slightly sharper relief.

The professional timidity among political beat reporters that Silver describes here, and the compromised attempts at accountability that result from it, don’t happen by accident. They arise from institutional mores learned and then enforced within the corporate media. It is not really the individual reporters’ access and reputations that they are designed to protect, but that of the reporters’ employers, as well as their employers’ bottom lines.

Most mainstream media reporters covering the White House know, in other words, that if they recounted in explicit detail how Trump’s aides think he’s too dumb/unfit for the job or turned in news stories every day plainly calling out all of his lies — rather than consigning them to the opinion page, as the New York Times does — they would not be long in their job.

That’s because truth-telling on that scale violates a longstanding gentlemen’s agreement that the corporate press has had with the White House. In striking this bargain, the media choose to respect the office of the president and afford it certain deference not extended to others public figures or organizations, in exchange for the prestige of continued access. The terms of this informal bargain have always come with a price — think of the press corps covering up FDR’s physical disabilities, or JFK’s compulsive womanizing — though it has obviously evolved and allowed for more transparency and critical coverage over the years.

But Trump judges the merits of press coverage not by its accuracy but purely by how good it makes him look personally. And he thinks nothing of labeling the press as an “enemy of the people” when it fails to engage in hagiography of him and his administration. It’s now clear that the Trump administration has little interest in allowing press access for any purposes other than just spreading White House propaganda, much like its de facto state TV arm, Fox News, does. This White House has routinely taken down government websites and pulled back on even the modest attempts at transparency by its predecessors. There’s no hope of any good-faith efforts to help the press inform the public that don’t align with the Trump White House’s political agenda.

That this president has so thoroughly rendered that deference-for-access bargain completely worthless is the primary cause of the disconnect between the daily press coverage of Trump and Wolff’s book. In effect, Trump is using the former’s need for ongoing insider access and fealty to “objectivity” against it.

Press briefings by Sarah Huckabee Sanders, for example, are a cruel insult to the public. The rarefied ability to sit in the White House briefing room and ask her questions more often approximates participation in absurdist, Orwellian performance art. 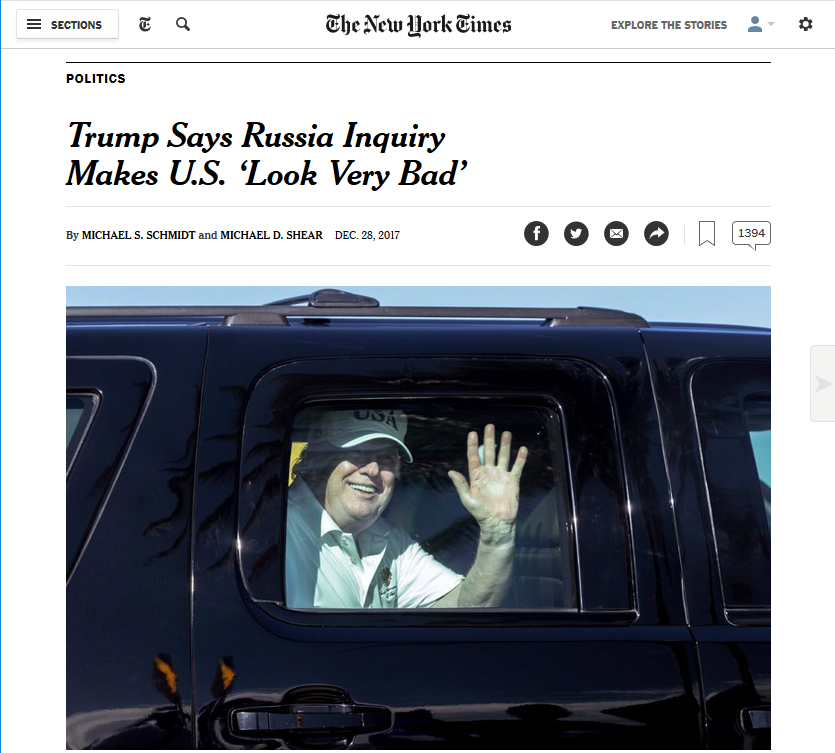 The New York Times interview in which reporter Mike Schmidt avoided follow-up questions because it “was more important to allow the president to speak and let people make their own judgments.”

Nor does the rare interview with Trump these days repetitively proclaiming “no collusion” make much in the way of real news. But it certainly does not help when a New York Times reporter who gets the opportunity (Dec. 28) is more interested in letting the president ramble on and air his grievances than challenging bad faith attempts at misleading the public, lest Trump “shut down.” (Reminder: Trump’s explosive admission to NBC News’ Lester Holt that he considered “the Russia thing” when firing FBI Director James Comey came after a dogged series of follow-up questions.)

Of course, news organizations cannot assign correspondents to cover the White House and then expect them to execute a one-off, insider bait-and-switch gambit with muddy definitions of what constitutes publishable “truth,” as Wolff did. Those news organizations do have to maintain continuity and professional standards.

And over at the Washington Post (Jan. 8), political scientist Dan Drezner mounted a defense of the corporate media against the scourge of Wolff’s truthiness reporting, pointing out that a vast amount of the Trump ignorance and staff chaos that Wolff depicts had already been reported in the daily press coverage. That is true. But that misses the point of why Wolff’s book has resonated. Its narrative achieved a critical mass precisely because it avoids the stock-in-trade journalistic baggage of tortured, normalizing language, false equivalence and an over-reliance on anonymous sources that accompanies so much of White House beat coverage. Nor does Wolff make any attempt to re-center the president’s aberrant behavior and non-stop lies as a kind of new normal or, as one New York Times White House story (Dec.31) cloyingly put it: “reinventing the presidency.”

The value of access to power boils down to what journalists spend it on. Wolff willingly cashed out all of his access to write a bestselling book that shredded Trump’s all-is-well propaganda, though he clearly short-changed readers with his lazy lack of due diligence.

White House correspondents too often make the opposite mistake, however: remaining so invested in their access that their accurate reporting doesn’t ever rise to the level of a worthwhile, interesting story that challenges the narrative of the powerful.

This article originally appeared at fair.org.