April 1 marked the halfway point in the federal government’s fiscal year and, so far, the United States has only admitted 10,548 refugees, placing it on track to fall far short of its already record low admission ceiling of 45,000 individuals. Resettlement workers and refugee advocates say that this is further evidence of the Trump administration’s deliberate efforts to sabotage the refugee resettlement system now and for years to come.

“The program is being torn down from the top,” says Dr. Shelly Callahan, executive director of the Mohawk Valley Resource Center in Utica, which works to resettle refugees.

Since 1980, the president has set the cap on refugee admissions each fall for the fiscal year running from October to September. President Trump’s 45,000 person ceiling is the lowest ever, down from 110,000 during President Obama’s last year. The number actually admitted rarely reaches the ceiling completely, but this year is among the worst in that regard, too. At the current rate, it will be only the third time since 1980 that actual admissions fell short of the ceiling by more than 50 percent, the other two times being immediately after 9/11, under George W. Bush.

Workers for the nonprofits that handle refugee resettlement claim the administration is deliberately slowing down the processing of cases as part of its effort to cause long-term damage to the country’s refugee resettlement infrastructure. In the past year, the administration has introduced time-consuming and unnecessary additional screening procedures. U.S. Citizenship and Immigration Services, an office of the Department of Homeland Security, has also reassigned “about 100” out of 197 Refugee Corps officers to the Asylum Division, according to a spokesperson.

While similar to each other in some ways, asylum officers do not conduct refugee interviews overseas, the first step in the lengthy and complex process by which individuals are approved for resettlement to the United States. With fewer refugee officers screening applicants overseas, the entire pipeline is slowed down, with dramatic effects.

The U.S. government works with nine private nonprofit organizations, known as voluntary agencies, to assign refugees to host communities around the United States. Voluntary agencies receive $2,125 in federal funding for each refugee they resettle and administer networks of local offices that provide services directly to the refugees. All of the approximately 320 local offices provide new arrivals with housing and social services including language training, job-search assistance, school-enrollment assistance and help integrating into the community during their first months in the United States.

In practice, virtually all resettlement offices also provide a variety of services to other immigrant, minority, and vulnerable communities alongside refugees, and assist refugees beyond the first months of resettlement. They rely on private donations for these programs.

In December, the State Department informed the voluntary agencies of its intention to close all local affiliate offices that are not projected to receive at least 100 refugees in fiscal year 2018. According to a plan drawn up by the voluntary agencies and obtained by Reuters, some 74 offices are expected to be closed this year. Eleven new offices that were in the planning phase at the time will not be opening, although some of them may still be able to operate as sub-offices dependent on other offices for cases and funding.

“We’re trying to look into what would be the best make up of our network and how do we change what currently exists into something more sustainable that can still meet its moral and legal commitments,” says Erol Kekic, executive director of Church World Service, one of the national voluntary agencies. Church World Service has closed 17 offices this fiscal year, bringing its total to just 19.

As of March 31, New York State has only been assigned 652 refugees via the State Department, far from the number needed to maintain the existing network. Despite this low figure, New York remains a major destination for refugees previously resettled in other U.S. states, as well as people applying for asylum on arrival at its busy airports — numbers that do not factor into State Department funding and closure decisions but represent constituencies that need many of the same services that refugees require and that resettlement offices are currently equipped to provide.

By throttling the pipeline, the State Department is creating the low numbers that it will then use to close offices in the name of cost-saving efficiency. It is also forcing staffing cuts at the agencies, whose funding depends on refugee arrivals.

The layoffs and closures being engineered by the Trump administration will impact the refugee resettlement system for years to come. Highly-skilled and specialized workers leaving the sector today will be hard to replace if and when a new administration restores the government’s commitment to humanitarianism. Educational and cultural programs cannot be revived at the drop of a hat, especially if the backgrounds of the new refugees differ from those of the earlier ones.

Perhaps even more concerning is the loss of the slowly-earned trust that makes agencies more efficient. 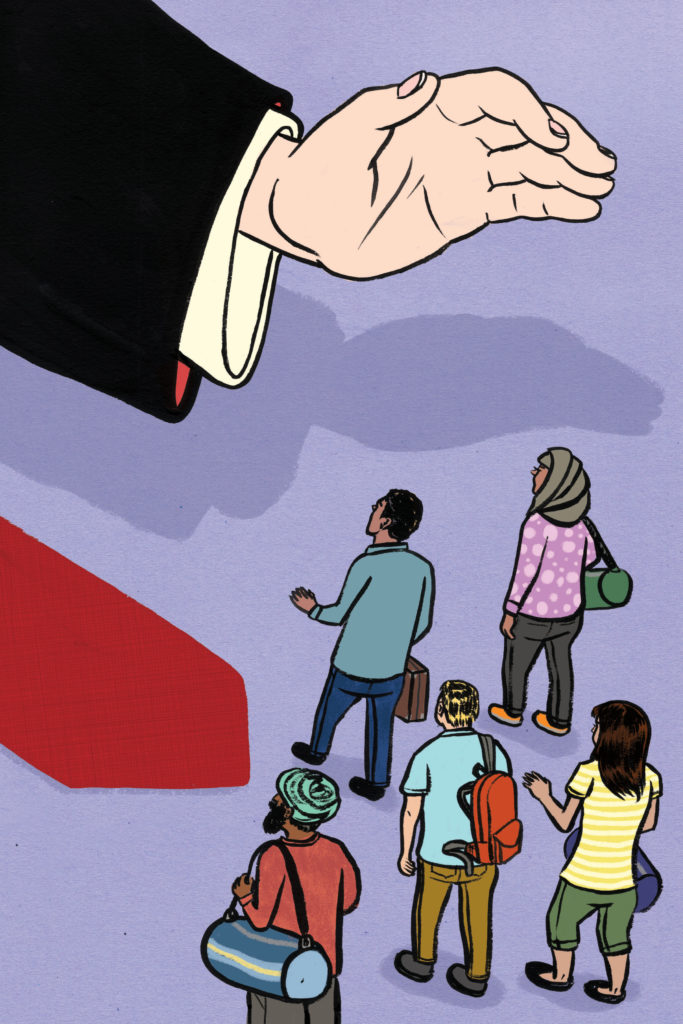 “[Resettlement offices] have already built up trust with communities, people know to come to us,” says Jim Morris, vice president of the Catholic Family Center in Rochester, N.Y. His organization and others like it need to establish relationships with refugee communities and state agencies in order to act as a facilitator between the two and ensure that refugees don’t get lost in bureaucracies they may not yet understand, he says. These relationships allow them to intervene early and prevent the need for more expensive and less successful interventions later on.

A closing office is required to notify its active clients but a larger and less defined network of people count on it being part of the community. “The resettlement agency isn’t just there to serve the client,” says Kelly Agnew-Barajas, director of refugee resettlement at Catholic Charities in Yonkers. “It’s also there to serve as a hub on refugee issues. People in universities, public schools and healthcare settings regularly come into contact with refugees and call the agency. It’s a community resource that’s especially knowledgeable.”

In response to the Trump administration’s attacks, many Americans have rallied in support of the local resettlement offices in their communities. Shelly Callahan of the Mohawk Valley Resource Center says her organization received the most donations ever last year and there has been a surge in volunteers. But, she says, “The State Department is dismantling the program from the inside out. I can have all of Utica hit the streets in support, but it’s not going to change the fact that overseas processing has come to a halt.”

Still, she says that her agency is standing strong and not going anywhere, no matter what the current administration dictates. “We’re fired up in a way we haven’t been, maybe ever,” she says.