The Indypendent
Menu
A Free Paper for Free People
Illustration by Lynn Foster.

In the ’90s, I was on a bus, carrying weed, and saw a man with a painting of Black Christ. He was handsome, brown and radiant. I stared at it like a mirror that reflected a better me. The man got off at a church. I got high with friends. At night, I stumbled past that church and sat on its steps. I told Jesus I was too lost to find home.

Today I am atheist, but growing up, it was Black Jesus who got me through hard times. I read Rev. Dr. James H. Cone’s work on Black Liberation Theology. His Christ was a revolutionary for the oppressed. Cone recently died and his legacy is in question. Black Lives Matters is tech-savvy and secular, queer and millennial. What will be done with a faith that linked us to our ancestors?

Last Sunday, I picked up Cone’s A Black Theology of Liberation and re-read, “The task of Black Theology is to analyze Jesus in the light of oppressed Blacks.” He was born in segregated Arkansas in 1936. Later as a young seminary student, he saw the 1967 Detroit riots, and rage, he said, “erupted out of him like a volcano.” Pouring his anger into the Bible, he found again what Black Christians had before, a theology that said God heard him.

Across the street, I saw elderly neighbors and families file into church. They believed in God. They sang and beat tambourines as the pastor’s loud call and response rocked the pews. I heard his sermons as I passed. He spoke of the God’s covenant with us, a promise of deliverance in exchange for faith.

When enslaved Africans converted to Christianity, they converted Christianity itself. One idea they borrowed and wove into a large moral vision was the covenant. Prof. Christopher Hobson’s elegant 2012 book, The Mount of Vision: African American Prophetic Tradition, mapped it out: “In covenantal thought, God’s favor and protection over time depends on the community’s maintaining or, after rupture, renewing the covenant.”

Faith that God would deliver freedom was seared into our ancestors in the Civil War. Cities were ablaze. The land was littered with rotting corpses. W. E. B. Du Bois in his 1935, Black Reconstruction, wrote of this blood-stained covenant: “To most of the four million black folk emancipated by the Civil War, God was real. They knew him. … His plan for them was clear; they were to suffer and be degraded; and then afterwards by Divine Edict, raised to manhood and power.”

Today, more than a hundred and fifty years later, that covenant has ruptured. A new generation has risen that is less religious. A new gospel has risen that is less about justice than success. At service hour, I see young men hustling on the corner. Inside, pews are half full. Many pastors don’t talk about “Jesus in the light of the oppressed.” They talk about money, money, money.

For years in Bed-Stuy, I walked past a mural of two pastors, smirking at the line, “It’s Your Diamond Decade.” They were prosperity gospel preachers, praising wealth as a sign of holiness. I heard their sermons spill out of church into everyday talk at the bar or gym or at work. It was like listening to people with gold rush fever.

Black America is split by class into nearly separate worlds. The poor are trapped in rural poverty or Section 8 housing in the city. The middle class has integrated into the white mainstream or live in small enclaves. The church that once forged the people into a movement has itself been split by this economic divide.

It has turned from the spiritual to the material. Instead of challenging the American Dream, many Black churches reflect its Who Wants to Be a Millionaire excesses. The list of prosperity gospel preachers is long. The oily Creflo Dollar is worth $27 million. He tried to fundraise $65 million for a private jet. Now-disgraced pastor Eddie Long was worth $5 million. T. D. Jakes is worth $18 million in Dallas where one out of three children live in poverty.

They are top-tier, the largest faces of the prosperity gospel and under them are lesser known pastors of smaller flocks, who pass the tithe bucket until checks and cash spill out. I remember talking with a friend who quit the church.

“When, every time I went, I had to stop at the ATM first,” he said, “Man, it burned me to be hustled for money by a pastor wearing a gold watch.”

The Church that Kills Its Children

“The old men leered at my breasts,” she laughed bitterly. “Ew. It was disgusting being in church. I sat in a dress but I was a million miles away.”

She never felt at home with her family’s God. The pastor ranted against “perverts.” She was bi-sexual. And curious. She ran away and changed her name. We met at a protest in New York and I asked her to write her story. She did in an essay titled, “Walking Away from the Black Church.” 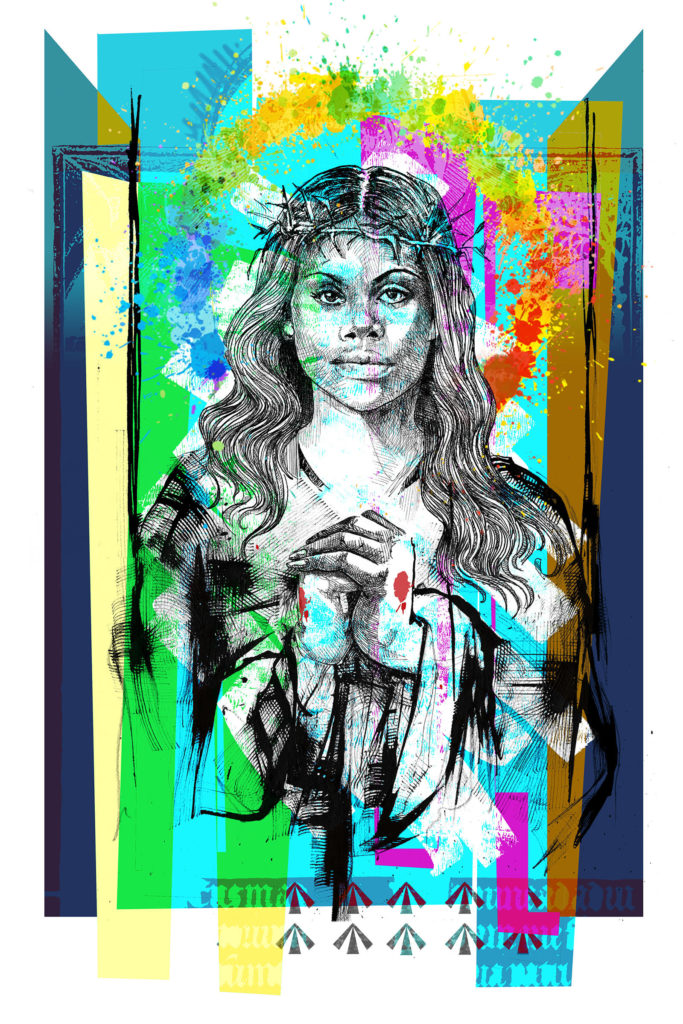 Through her eyes, I saw how the church’s homophobia drove LGBTQ youth from their homes and into the streets. They were abused and had sex to barter for food and shelter. A lot of her friends were runaways of one sort or another.

How many Black children fled their families because their parents believed God hates gays? What happened to them? Did they survive?

Last year, I was told, she committed suicide. I wasn’t surprised. She had tried before. But I wept anyway. She deserved better. She deserved a God that loved her too.

“It is wrong to claim our present circumstance as the redemption,” Ta-Nehisi Coates wrote in Between the World and Me, “people never asked for the posthumous glory of dying for their children.”

No God. No redemption. No covenant. As the voice of a generation, Coates is a touchstone with which to measure the distance from Cone’s militant Christianity to Black Lives Matters’ today. In Cone’s halcyon days, the Black church was one of the spaces to strategize protests. The pastor was the leader. The Bible was the well of deep, moral imagery that Black resisters from Malcolm X to Martin Luther King Jr. to Ella Baker used.

Coates’ young Black readers go to church less and read scripture less. They strategize Black Lives Matter protests from online or at college or community centers. They draw on memes not Bible verses. They are queer-friendly. They are decentralized.

As the youth march into the future, what role is left for the Black church? A few carry the torch, like participants in Rev. William J. Barber’s Moral Mondays protests. But many don’t.

Maybe it’s time to reread Cone: “Being black means that your heart, your soul, your mind, and your body are where the dispossessed are.” And add to that Ludwig Feuerbach’s famous line from his The Essence of Christianity: “God is nothing else than man, he is the outward projection of man’s inner nature.”

If so, then true religion is inherently on the side of justice because prayer and prophecy are how millions of people reconnect to ourselves. Let’s reclaim it. Let’s remake God again and say, Jesus is gay. Jesus is transgender. Jesus is Black. Jesus is in jail. Jesus is a sex worker. Jesus is poor. Jesus is a refugee. Jesus is all the dead parts of us that are resurrected with love.