“How the fuck did this happen?” is the question Michael Moore lobs at us as he concludes the first act — a kind of prelude, actually — of his new film, Fahrenheit 11/9. While he diverges widely from his pursuit of its ultimately elusive answer, that question looms over and frames the rest of the film, haunting Moore’s steps as he tries to make sense of a world gone mad.

While he may not reach an entirely satisfactory conclusion to this initial quandary, he is much more direct and clear when it comes to an even more important question: “Where are we now?” which is what he tackles in the last third of his ninth feature-length documentary film.

Between these two questions, Moore takes us on a meandering, at times head-scratching, but always entertaining journey through his experience of the United States since the election of Donald Trump.

“If a film student tried this, wouldn’t the professor have to flunk them?” was one question that sprang to my mind while watching this peripatetic, sprawling, non-narrative film. Michael Moore, however, is such a familiar and successful filmmaker that at this point it seems as though he can break or rewrite just about any rule of filmmaking and get away with it. The audience (or at least his fans) will give him a degree of latitude that I don’t think would be afforded to any other director.

Moore has often been accused of abusing this latitude, and justifiably so. He has had a tendency to center himself so powerfully as the protagonist that his personality can overwhelm the bigger picture, diving into an overworn bag of tricks and stunts that cast him as the everyman hero.

To his credit, Moore relies far less on these tropes in this film. The few instances where he indulges himself almost feel like a nod to films past, a gesture to the fans that like to see him do his gumshoe-prankster schtick. He doesn’t linger there, thankfully, and he makes a point of sharing the spotlight with the other characters. Unsurprisingly, the film is a bit rudderless without Moore’s dominating presence, as though he isn’t really sure how to fashion a narrative arc without himself at its center.

By raising the alarm at this fervent a pitch, Moore has done a great public service.

To say that the film lacked structure would be an understatement. The experience of watching it was was like getting a tour of Moore’s mind — definitely an interesting place to visit but not one that necessarily provides you with a clear set of bearings, much less a sense of overarching narrative. Not that he doesn’t have stories to tell. He has lots of them and good ones. And he’s good at telling them.

Do you remember election night? Moore’s depiction of that evening makes that already strange experience feel even stranger. The scenes of competing campaign gatherings feel almost hallucinatory, as though from another timestream, an alternate history. The anticipatory exuberance of the Clinton camp contrasted against the subdued, almost humble (I know, it’s crazy, but that’s what it was like) gathering of Trump’s ragtag band of criminal misfits feels as though the election happened on an alternate planet — and now we’re on the wrong one.

We were all so sure she was going to win. The somber march of Trump’s forces as they go out to claim a victory they didn’t anticipate or even really want is the kicker. It is clear that they, as much as Moore, as much as anyone, are in that moment wondering, “How the fuck did this happen?”

But then we’re off to Flint, Michigan, West Virginia and Parkland, Florida among other places. None of them have much of anything to do with analyzing how the United States elected a reality TV show con man as president, but they all have a lot to teach us about just where we are now. Here are a few takeaways from the tour:

These are all great stories but they don’t address Moore’s original question about how we got in this mess in the first place.

He definitely takes his shots at answering that question though and they are on target. He rightly blames the Clintons for their considerable role in turning the Democratic Party away from organized labor and towards Wall Street, while attacking the social safety net and ramping up the carceral state. They and their cohort turned the party into a version of Republican-lite, leaving working people (of all colors) with nobody to represent them, leading to lower turnout at elections. Moore’s diagnosis here is unoriginal but bears constant repeating. It’s what the progressive left has been saying for decades.

More surprising are the shots Moore takes at Obama, who remains untouchable to many progressives. Moore makes it plain that the Democratic Party remains a party run by and for elite interests, of which the Obamas were and are a part. The sharpest cut to Obama is Moore’s unflinching look at the president’s visit to Flint during its water crisis. I won’t spoil the surprise, but suffice it to say that it shocks the conscience.

Moore reminds us that things were fucked up before Trump showed up on the scene. Under two consecutive presidencies (George W. Bush and Obama) the entire country saw there were no consequences for massive criminality in the wake of the illegal war on Iraq and the crashing of the U.S. economy. Now we have a president who is the very embodiment of impunity. These things are not disconnected. Moore deserves credit for reminding us all of this truth. 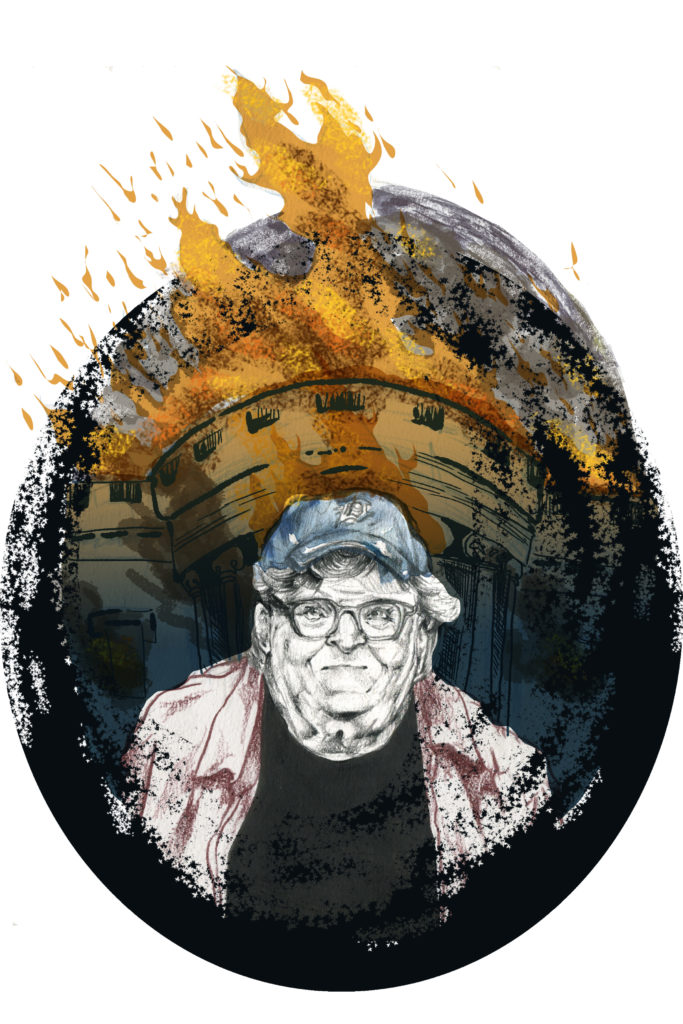 It is the final part of the film that really packs a wallop. Moore makes a persuasive case that we are teetering on the verge of fascism. He carefully examines historical parallels with the help of astute and lucid historians and takes a methodical look at the strategies of the Nazis, pointing out that the Weimar Republic was a flourishing democracy, with a robust free press and highly literate and engaged citizens. The assault on democratic institutions — the legal apparatus, the press, the political class as a whole — when combined with the racial scapegoating of the Jewish minority and attendant appeals to tribalism is what gained the Nazis their base of support and kept that base with them. It wasn’t a fluke or an accident. It was a plan.

Trump and his team are following an eerily similar script, albeit adapted to a society with a much less literate citizenry and a social media system that already amplifies tribalist tendencies.

Perhaps the most revealing insight, however, is how both the Trump gang and the Nazis were able to accurately assess exactly who they needed to appease in order to take and hold power.

Trump satisfies his base with a few bombastic tweets every couple of days, creating counterfactuals while letting surrogates make occasional excuses for his “lack of polish.” His other audience is the ruling class, elite interests that have no interest in actual populism and might actually be turned off by his divisiveness. They aren’t that hard to appease either. Tax cuts and deregulation that send corporate profits soaring will do the trick. Turns out that the Nazis passed similarly elite-friendly policies while they consolidated power. It’s a nice little one-two punch and it has been used by other authoritarian regimes as well.

Moore’s film does the work of revealing all this as a coherent and effective strategy for taking and holding power. The Nazis understood the nature of power. So does the Trump gang. This is not to say that Trump is a genius, but he does intuitively understand the mob, while the past and present cast around him — Jared Kushner, Stephen Miller, Steve Bannon, Paul Ryan, Mitch McConnell — understand the importance of keeping the ruling class happy.

It is a terrifyingly convincing argument. After viewing this film it’s hard not to conclude that we are truly on the brink of fascist rule and run out of the theater yelling, “The fucking house is on fire and we have to do something!”

By raising the alarm at this fervent a pitch, Moore has done a great public service.

So, what do we do? Moore calls for a dual strategy: an electoral insurgency from the populist left led by figures such as Bernie Sanders and Alexandria Ocasio-Cortez (who has a great cameo role here), and, simultaneously, unrelenting street activism to keep pressure and heat on those currently in power.

Moore has made similar calls to action before. But the stakes now feel bigger, starker and more frightening. The coming midterm elections will determine a great deal in regards to keeping Trump in check. I, for one, immediately took out my checkbook when I got home and gave to a few political groups that share the analysis articulated by this film. I will also do some phone banking and I will re-dedicate myself to showing up in the street. I hope you do the same. If the house is on fire, it’s going to take a bucket brigade of everyday citizens to put it out.