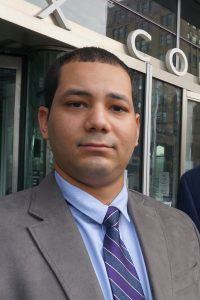 On a Friday evening in late October 2016, Frankie Breton, a senior at NYU, returned from the first day of his internship at a Manhattan consulting firm to his girlfriend Katherine Tejada’s place in Washington Heights. When Breton arrived, he found Tejada’s ex-boyfriend furiously trying to kick in her apartment door.

When Tejada’s ex, Manny Matias, saw Breton, he yelled out, “That’s homeboy! It’s on!” Matias then charged at Breton and landed several punches. The fight spilled out of the building, at which point Matias took out a knife and began stabbing Breton, who suffered sharp cuts to his right hand.

Breton next tackled Matias, forcing him to drop the blade. Breton then grabbed the knife, put it in his pocket and ran down the block. Matias picked up a piece of wood and chased after Breton, who called 911 and flagged down an NYPD squad car.

As Breton and the officers arrived back at Tejada’s building, more cops pulled up. When Breton exited the squad car with the officers, Matias shouted, “That’s him!” Breton showed his bloody hand to the cops, but Matias, though unscathed, insisted that “No, he stabbed me.”

NYPD Sergeant Freddy Cruz then searched Breton for a weapon and found Matias’ knife in his pocket. Although Tejada and other witnesses assured them that Matias was the assailant, the cops nevertheless cuffed Breton. He and Matias were brought to the 33rd Precinct, where the latter was already wanted for earlier assaults on Tejada.

At the station house, Matias gave a statement against Breton, whom cops then charged with first-degree assault. Matias walked out of the precinct a free man.

Breton was held in custody until his arraignment that Saturday in Manhattan Criminal Court, where — despite being charged with a violent felony — he was released without bail. Breton’s hand was still bleeding, so he went to New York-Presbyterian Hospital, where doctors told him that although his hand needed sutures, too much time had elapsed after the initial wound to apply them. He had received no treatment while in custody.

Things then got even more absurd.

On that same Saturday afternoon, NYPD officer Steven Clarke — who had arrested Breton, taken Matias’ statement at the precinct, and sent the report charging Breton to the Manhattan DA’s office — visited Tejada’s apartment.

Clarke proceeded to apologize to Breton for wrongly arresting him and to Tejada for releasing Matias without searching for active warrants. Clarke’s remorse, however, was not combined with an important corresponding action: He did not withdraw the initial reports against Breton that he filed with the District Attorney.

In late January 2017, just over four months after Breton’s arrest, the Manhattan DA’s office, which had conducted its own investigation of the incident, dropped the charges on the grounds that Breton had acted in self-defense.

Such are the facts of the case as alleged in a civil lawsuit filed by attorney Andrew Stengel in the Southern District of New York. The suit’s primary claim is wrongful arrest, and it names the City of New York and NYPD officers Clarke and Cruz, as the main defendants.

Earlier this month federal judge John Koeltl rejected an effort by the city’s lawyers to dismiss the case. During oral arguments that preceded his ruling, Koeltl clearly viewed the above outline of events in the case to be compelling.

“[T]he plaintiff has made a strong case that there was evidence here that contradicted probable cause” to arrest Breton, Koeltl told the city’s lawyers and Stengel. He further advised the city’s team that the “case cries out to be settled sooner rather than later.”

As Stengel told Judge Koeltl, initial settlement discussions between the two sides had stalled by the time of the late July court appearance. “[Y]ou may want to reconsider,” Koeltl advised the city’s lawyers at the time.

But as Stengel tells The Indypendent, the city’s team then made an offer that “was not serious and in bad faith.” And in early September Koelt thus issued his ruling that allows the case to go forward to a possible trial, where a jury could award Breton a far greater amount than he has requested.

“’No probable cause’ decisions are not common,” says Stengel, who credits Brooklyn exoneree Jabbar Collins, now a paralegal, for his “indispensable” consulting work on the case.

“The NYPD doesn’t have license to ignore affirmative evidence of a suspect’s innocence,” Collins says. “And they also must inform the DA when they uncover such evidence.”

As George Joseph and Ali Winston reported for Gothamist this week, Stengel has been waging a battle in State Supreme Court to force the city DAs to turn over any “Do not call” lists of cops with track records of making false statements. Officer Clarke might be a good addition to the Manhattan DA’s list if he isn’t on there already.

Epilogue: Matias was not charged for his assault on Breton. But he’s had several scrapes with the law since the 2016 incident.
The Indy’s Theodore Hamm will be moderating a discussion of U.S. politics with authors Matt Taibbi, Sayu Bhojwani, and Jonathan Metzl at this Sunday’s Brooklyn Book Festival.