The Indypendent
Menu
A Free Paper for Free People
Ray Normandeau (right) with his wife Rita stands outside the Queensbridge Houses where he has lived since 1973.Photo: Sue Brisk.

When 26,000 Bernie Sanders supporters gathered in Queensbridge Park last Saturday to welcome their candidate’s return to the presidential race less than three weeks after suffering a heart attack, it was one of the feel-good moments of the campaign season.

Highlights of the day included a ringing endorsement from freshman congresswoman Alexandria Ocasio-Cortez and Sanders concluding his hour-long speech by calling on everyone present to look into the eyes of someone different than them and promise to fight as hard for that person as they would for themselves. This was followed by an enormous roar from the crowd.

Two days later a story on patch.com cast the event in a very different light and rippled across social media. In this retelling, the rally had been a mostly white invasion that ‘blindsided’ residents of the nearby Queensbridge Houses who had been left in the dark by event organizers. The story relied on quotes from Queensbridge Tenants Association President April Simpson, and from Bishop Mitchell Taylor, a local minister who runs a jobs-training program.

“The only people who complain are those who have an ax to grind against AOC and Bernie Sanders because they were against the thief-in-the-night actions of Amazon,” said Ray Normandeau who has lived at the Queensbridge Houses since 1973 and publishes the queensbridge.us website. 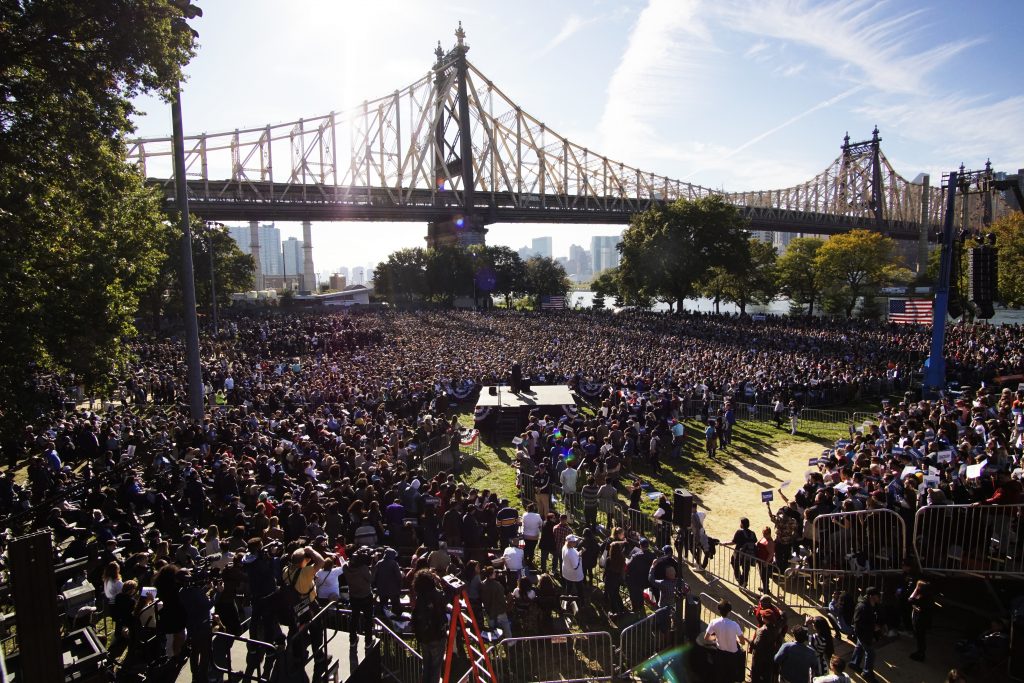 Some Queensbridge residents attended the Bernie Sanders rally on Saturday, others watched from the comfort of their homes. Photo: Sue Brisk.

Ocasio-Cortez used her massive Twitter following to rally opposition to the deal soon after it was jointly announced last November by Gov. Andrew Cuomo and Mayor Bill de Blasio and became one of the faces of the opposition to the mega-project.

Simpson supported the project in the hopes that it would bring jobs to residents. Taylor runs a jobs-training program as a part of Center of Hope International, the Long Island City-based church that he leads and would have stood a good chance of obtaining jobs training funds from Amazon.

The Indypendent tried to reach both Simpson and Taylor without success.

Normandeau told The Indyp that the rally was well known to Queensbridge residents in the week leading up to the event. In addition to the 500 residents he estimated were at the rally, he said others threw open their windows and watched from the comfort of their homes. One upshot of the event, Normandeau said, was that within hours of Sanders describing how residents frequently have to go without heat in the winter, the heat came on in his building for the first time this fall.

“I’m glad to know,” he said, “that all you need to do to get heat in your NYCHA apartment is to get a rally of 25,000 people and have it broadcast worldwide with a major presidential candidate saying there’s no heat in the Queensbridge houses.”