The Indypendent
Menu
A Free Paper for Free People
Julian Assange with U.N. Special Rapporteur Maina Kiai prior to his eviction from the Ecuadorian Embassy.Photo: Maina Kiai/Flickr. 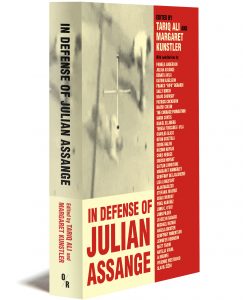 Whistle-blowing, truth-telling journalist and WikiLeaks founder Julian Assange now sits in solitary confinement in London‘s infamous Belmarsh prison. The Trump administration has asked that he be extradited to Virginia for trial as a spy.

The just-published book In Defense of Julian Assange demonstrates convincingly that what is at stake in his upcoming trial is the future of free journalism, here and abroad. It is edited by British socialist scholar and writer Tariq Ali and civil rights attorney Margaret Kunstler.

Assange is an Australian citizen. He never set foot in the United States. He never published untruthful materials. Yet the Trump administration wants to reach across the ocean, have him extradited to the United States, try him and put him in solitary in a maximum-security prison for the rest of his life. If the government can get away with this, it will have established a precedent that could lead to the destruction of free journalism. It is the most significant challenge to a free press in our lifetimes.

Assange faces a 175-year sentence under the century-old Espionage Act, passed during World War I to be used against spies. He is charged with conspiring with Chelsea Manning to publish the Iraq War Logs, the Afghanistan War Logs, and State Department cables that embarrassed U.S. diplomats around the world and helped spark a 2011 revolt in Tunisia that was the beginning of the Arab Spring.

Former CIA director and current Secretary of State Mike Pompeo has called WikiLeaks a “non-state intelligence service.” Hillary Clinton wanted Assange assassinated by drone. The United Nations special rapporteur on torture Nils Melzer recently visited him in prison and concluded that he was being tortured. When he last appeared in court, he was incoherent and couldn’t remember his name or date of birth.

Julian Assange is not getting the support he needs. Too many progressive-minded people have been taken in by government propaganda about him.  He detests Hillary Clinton, but many people think he supported Trump in the last election. In truth, Assange said it’s “a choice between cholera and gonorrhea.” He insists he did not collaborate with Russia to help Trump and the investigation into accusations of rape against him in Sweden has been dropped by the prosecutor in that case.

The great human rights attorney and president of the Center for Constitutional Rights Michael Ratner represented Assange, who was his last client. Michael died in 2016. Heidi Boghosian, myself and Michael used to record our WBAI radio show Law And Disorder in the ante-room outside of Michael’s office in the basement of his home in the Village. Assange would often call. Michael had a secure encrypted telephone installed to speak with Assange who had received political asylum in the Ecuadorian Embassy in London.

We knew what the United States would do if it got its hands on him.  Michael wrote at the time that “if there is one take away from the shared experience in truth-telling and courage, it is a note of extreme caution: never doubt the mendacity and cruelty of the state. It will make pariahs and outcasts of those who will someday be recognized as heroes.“

The United States claims the right to snatch Assange up in England and drag him into court in the Eastern District of Virginia where the evidence he needs to use in his defense will be barred and where the bar for conviction is low.

Three years after the Bush administration commenced the illegal, catastrophic war against Iraq, Assange launched WikiLeaks in 2006. A computer genius, Assange devised a way for publishers to receive leaked materials anonymously. That year, he published his first bombshell, a shocking video obtained from whistleblower Chelsea Manning who was then in the military.

The video showed U.S. soldiers in a helicopter committing a war crime, gunning down and executing almost a dozen unarmed Iraqi civilians in the streets of Baghdad, including several children and two Reuters journalists. The soldiers can be heard chuckling about it. A photo of the murders is shown on In Defense’s cover.

The video, which offered an unvarnished glimpse into the casual brutality and racism of the U.S. occupation of Iraq, made headlines around the world, much to the chagrin of U.S. leaders. More embarrassing leaks followed, and the government undertook a years-long campaign to close down WikiLeaks.

It has successfully poisoned a lot of people’s minds against Assange, first smearing him as a rapist and then a Trump supporter responsible for Hillary Clinton’s defeat. The editors write of a decade-long character assassination campaign: “The US espionage indictment against Assange shows that he has been the victim of psychological operation warfare — rumor, disinformation, and false news — designed to destroy his reputation and defame his character.“

The people at the helm of the U.S. disinformation and propaganda machine figured character assassination is just as effective as a bullet to the back of the head. The smears against him are blown out of the water in this book.

In Defense is being published by OR Books at the initiative of its co-founder and editor Colin Robinson and with the support of the Courage Foundation. It consists of a powerful introduction by the editors followed by 38 essays, many of them commissioned for the book.

Some of the authors — Noam Chomsky, Chris Hedges, Matt Taibbi — are well known and all are knowledgeable. Jen Robinson the London human rights barrister is currently Julian’s attorney. She contributes an essay. So does Ai Weiwei, the internationally-acclaimed Chinese contemporary artist, activist and dissident, who visited Julian in prison, and Margaret Kimberly, an editor and senior columnist at Black Agenda Report.

Until now it has been legal for a publisher to publish truthful information no matter how she or he got it. (Chelsea Manning sits in jail as of this writing because she will not give further testimony to a grand jury on the subject. She had previously served seven years in prison after pleading guilty to furnishing materials to WikiLeaks.) That was the precedent set in 1971 in the famous New York Times case when Daniel Ellsberg gave the Pentagon papers to the newspaper and they published it showing the criminality of the war in Vietnam. Attorney Jim Goodale was the chief attorney for the Times back then. He is a vigorous supporter of Assange.

Labour Party leader Jeremy Corbyn has promised he would deny the U.S. request for Assange’s extradition if elected prime minister on Dec. 12. His shadow Home Secretary Diane Abbott said in Parliament on the day of Assange’s arrest that it was his “whistle-blowing activity [against] illegal wars, mass murder, murder of civilians and corruption on a grand scale that has put Julian Assange in the crosshairs of the U.S. administration.”

In a letter from his highly restrictive confinement in Belmarsh Prison, Assange wrote on May 13, 2019: “I am unbroken, albeit literally surrounded by murderers, but the days when I could read and speak and organize to defend myself, my ideals and my people are over until I am free! Everyone else must take my place. I am defenseless and I am counting on you and others of good character to save my life… Truth, ultimately, is all we have.“

Get the book. Spread the word. Free Julian.

In Defense of Julian Assange
Ed. by Tariq Ali & Margaret Kunstler
OR Books, 2019

Purchase a copy of In Defense Of Julian Assange today for $25 and show your support for a free press. All proceeds go to support The Indypendent, NYC’s radical newspaper.

CORRECTION: An earlier version of this article stated that prosecutors in Sweden had dropped charges of rape against Julian Assange. In fact, prosecutors declined to indict him citing a lack of evidence. Assange has never been charged with rape.