They said it would keep us safe. They said it would keep us strong. They said it was proper retaliation for violence done to us or our allies. On Jan. 3, the Trump administration launched an airstrike in Baghdad that killed general Qasem Soleimani. It felt like the beginnings of yet another endless war at the behest of yet another unpopular Republican president. In claiming that Soleimani was a threat to American lives, Donald Trump was embracing the tactics used effectively by George W. Bush for his 2003 invasion of Iraq (and by Bush’s father, George H.W. Bush for his 1991 invasion of Iraq). Vice President Mike Pence even tried to connect Soleimani to the 9/11 attacks, much as the Bush administration did with Iraqi dictator Saddam Hussein in 2003. Seventeen years under the same banner, drawing from the same well.

Two months earlier, the “Theater of Operations: The Gulf Wars 1991-2011” exhibition opened at MoMA PS1 in Long Island City. Its timing would seem quite prescient, except that there’s nothing unusual about this new attack. After all, the United States (along with some European allies) has been manufacturing conflict in the oil-rich Persian Gulf region for decades. Theater of Operations is an ambitious show: a sort of dense, mosaicked history lesson. Its paintings, sculptures, large-scale installations and many hours of video occupy the entire museum. 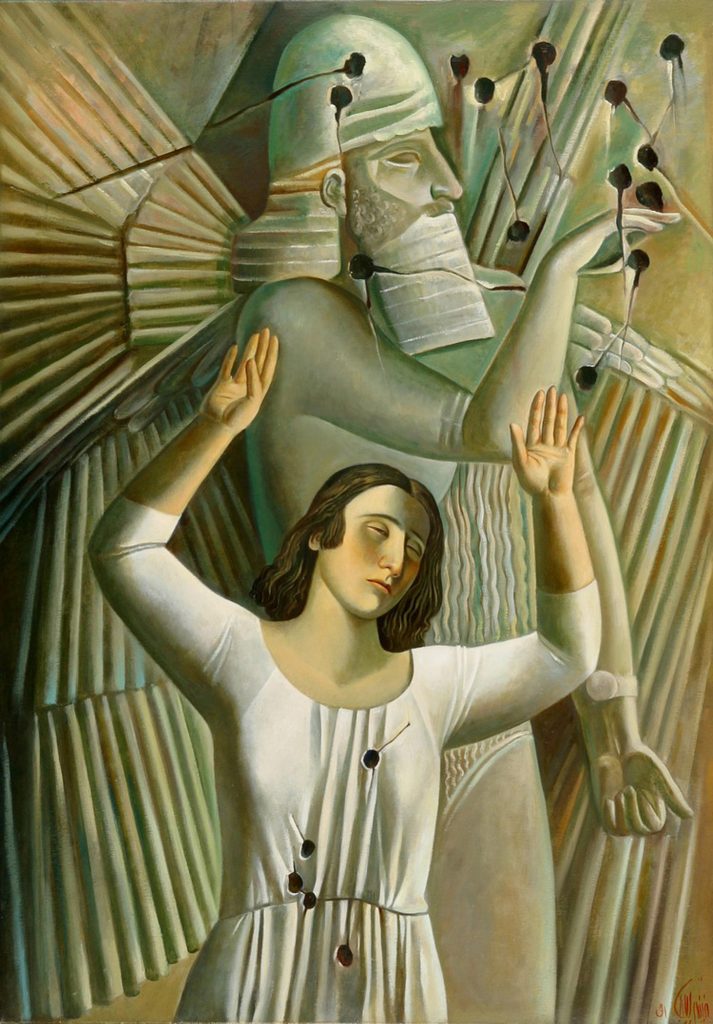 The show is split between artists from the Middle East and from the West (mainly the United States and the United Kingdom). The Western art is saturated with a grim, vexed, helpless mood. Though most Americans now see the 2003 invasion of Iraq as a mistake, it had broad popular support at first. It was championed as a well-stoked blast of Western supremacy, and as a proud, chest-thumping surge of American masculinity. Writing at the time, cultural theorist Nicholas Mirzoeff likened it to James Joyce’s aphorism “And he war.” For the United States, the invasion was very much a “he war.”

In sad truth, for many on the anti-war left, it was a time of not knowing what to do. That feeling is captured in works like Rainer Ganahl’s 2004 paintings of popular online news sites, or Michael Auder’s Gulf War TV War (2017), a 102-minute compilation of TV footage, starting in 1991 and including war-hungry pundits and fetishistically shot military hardware like fighter jets and sand-colored tanks.

The work from Middle Eastern artists feels different, less despondent. A series of fluid, blue-tinted 1991 works by Thuraya al-Baqsami, made in Kuwait City while it was under Iraqi occupation, shrouds wartime struggle in scenes of sensuous, traditionalist allegory. Khalifa Qattan’s luminous, near-psychedelic canvases hint at fiery conflict, but actually predate the early-’90s war. (He has claimed that they were prophetic visions of the wars to come.) The exhibit includes many handmade dafatir (small, portable and fairly cheap to make artist books), whose popularity in Iraq emerged — at least somewhat — out of the economic hardship after the 1991 war. Works by Ghassan Ghaib, Sadik Kwaish Alfraji, Kareem Risan and Hanaa Malallah find spaces for loamy, ground-level immediacy within moments of chaos — a sharp contrast to the top-down aeriality that has come to define the Western position in the region. (Soleimani, for example, was killed with a drone strike.)

There’s also straightforward social commentary, like the sculpture ∞ (1991–2001) by Beirut-born British sculptor Mona Hatoum, which presents a battalion of bronze army guys, marching forever forward in a ∞-shaped loop. A bit blunt, yeah, but is it wrong?

Elsewhere, the exhibition wisely allots breathing room to some especially harrowing works. American video artist Tony Cokes’s stark, direct Evil.16 (Torture.Musik) (2009–2011) reflects on the shameful and likely continuing U.S. military practice of utilizing loud American music (Guns N’ Roses, Christina Aguilera, the Sesame Street theme) as a torture device; Cokes notes that this is war not only in the name of American culture, but actually waged with American culture itself as a weapon. Baghdad-born British painter Dia al-Azzawi’s Mission of Destruction (2004–2007) is a personalized, muralistic riff on Picasso’s 1937 Guernica: It takes a symbolic glossary of wartime violence created by a 20th-century European, and reconfigures it for a 21st-century horror waged, in part, by European powers.

Some of the exhibition’s strongest moments, though, are from young Iraqi artists such as Ali Yass and Ali Eyal. Both were born after 1991, and both use colorful, airy visuals and intimate subject matter such as childhood drawings, nightmares to prod at the intractable weight of remembered violence. At least one exceptional work has been pulled from the show: British artist Phil Collins removed his 2002 video baghdad screentests in protest of MoMA board members Leon Black and Larry Fink’s deep ties to war profiteering, military contractors and immigrant detention centers. 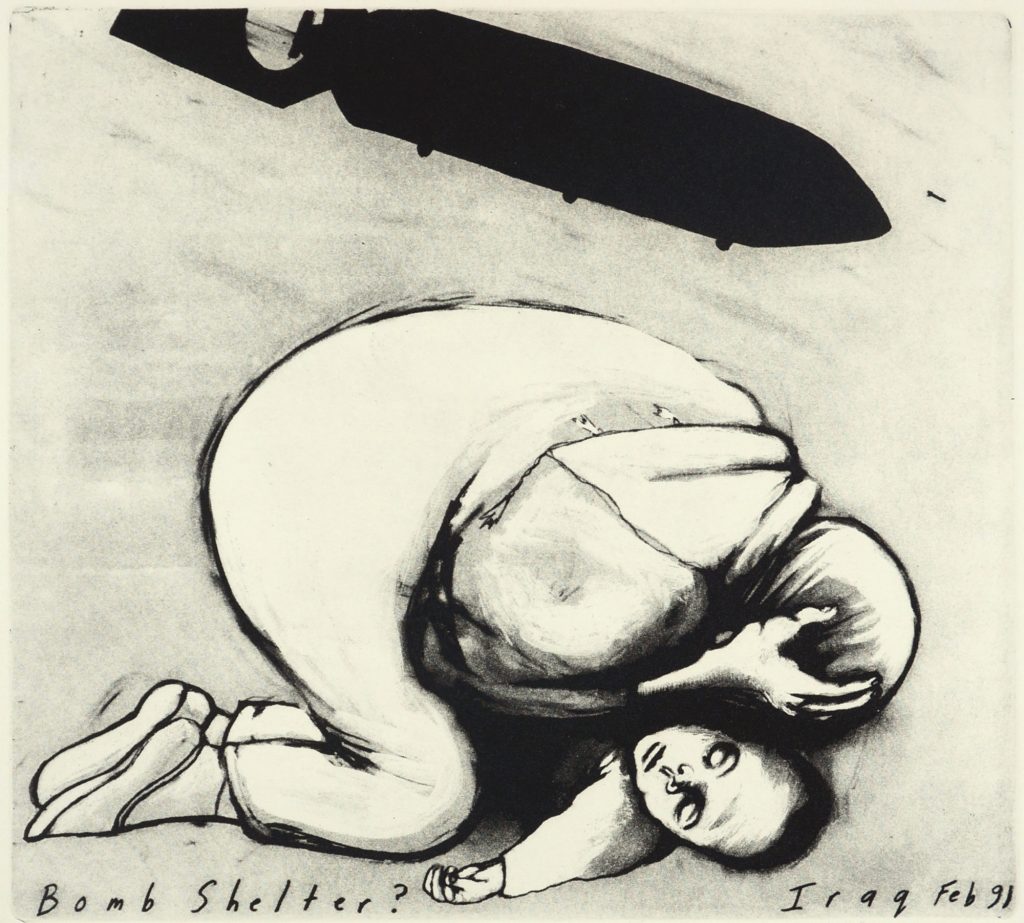 It’s hard to know what to make of all these small signs of resistance in the face of the ashen, calamitous cruelty of the wars themselves, conflicts that launched at full bore, continue to this day and still serve as a wellspring of imperialistic force for the ruling classes. The fact that a lot of artists hated these wars is some very cold comfort. But right now there’s hope, as it seems that the familiar Bush-era drum-beating tactics may have lost their immediate efficacy. The news media seems skeptical, polls show that Americans don’t want another war and despite the overt aggression from our government, we are, as of this writing, not in an all-out war with Iran.

If there’s a dominant mood in “Theater of Operations,” it’s one of futility, frustration, and pain. It’s harsh in the moment, but there’s reason to hope that this feeling will continue to color the legacy of the conflicts, to make it clear that on the ground, no one benefits from these long, sad, and incredibly destructive wars. There’s reason to hope, in other words, that the well is starting to run dry.