Yesterday, a 17-year-old girl called me crying, barely able to tell me what was wrong. I sat patiently waiting in extended moments of silence for her to gather her words while I forced back my own tears. I already knew what was upsetting her couldn’t easily be pinpointed and I couldn’t immediately fix it: she was deeply depressed. As an only child, and mildly autistic, she has been miserably isolated at home for over six months, unable to focus on school and unable to see her future.

As someone who has worked with young people of color from my working class community for the past nine years, these types of calls are common, but this year the frequency has grown at a disturbing rate. When I started a youth green jobs program in 2013, BK ROT, I became a strong emotional support for young people in my community, but this year the need for frequent mental health support has been overwhelming.

A week ago I got a similar text from Joseph*, a queer Black undocumented 20-year-old I had hired to work at BK ROT when he was 16. I immediately facetimed him to find he was in his room with all the lights off and the curtains drawn at 11am. He had been like this for three days and it was all I could do to get him to open the curtains and take a walk in the hallway to just move his body. Two years ago he had to leave the country after living in a youth shelter in Harlem when his green card application was denied, even though he had been living here since he was 13 and had left an abusive home. There alone, in another country, away from a support network that myself and many friends had built for him, he was depressed amid a pandemic with no real end in sight.

On both calls I was sitting in my car anchored to my seat with nothing to offer but time. I spent over an hour listening and trying to convince them that although the world feels so uncertain, all they could do right now is put one step forward every day. Catching myself in the rearview mirror, I realized I was talking to myself as much as them.

Right now our young people are truly struggling to make sense of what is happening and to see themselves in the future, and rightfully so. How do you convince a teenager the future is bright when they are watching fires ravage the West Coast, reading about the six white nationalists tried to kidnap and lynch a governor, watching the president recklessly spread COVID-19, witnessing the hate speech growing, experiencing serious social isolation, and fumbling through online learning?

The mental health impacts of this year are going to be felt for a long time across the board.  We cannot afford to lose any professional help that could save lives.

When we demanded $1 billion be cut from the NYPD’s $6 billion annual budget and be redirected to life saving public programs, this is what we were talking about. We spend money on military grade surveillance equipment, but chop programs dedicated to ending drug addiction and mental health care. During this incredibly challenging time, with so many people having lost loved ones and so many parents and young people feeling insecure about the future, these services are crucial. We cannot have community safety without them.

*Joseph is a pseudonym. 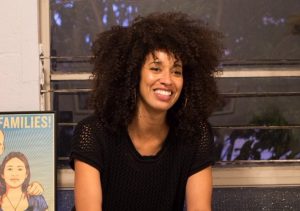 Sandy Nurse is the founder of BK Rot and co-founder of the May Day Space. She is currently running for City Council in District 37 in North Brooklyn.