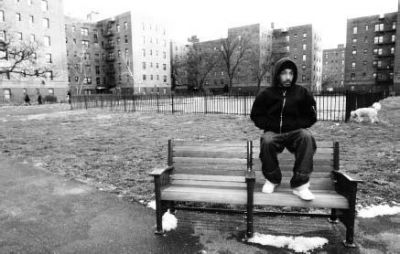 NOEL TAKES A BREAK: “I have an anger problem. I still got that war mentality. This whole ordeal is breaking up my family.” PHOTO: ©ANDREW STERN/ANDREWSTERN.NET

Four nights before Christmas, former U.S. Army specialist Herold Noel huddled for warmth in front of a fire he built for himself in Brooklyn’s Prospect Park as temperatures slid toward the single digits. Plagued by nightmares and unable to hold a steady job or get the assistance he needed, he was on the verge of losing his wife and three young children. It wasn’t the homecoming he’d expected after serving in Iraq last year.

“There was one time,” he recalled, “when me and my battle buddies made a fire and we were sittin’ out there in Iraq and talking about when we get home we’re gonna be looked at as heroes. We’re gonna be in the history books. Man, half the guys I came back with are going through the same thing I’m going through.”

According to the Pentagon, 955,000 U.S. troops have already served in the Afghanistan and Iraq wars. The experiences of Noel and others like him have many observers worried that the country will be inundated by a wave of returning veterans with no place to go and reeling from psychological trauma, as happened toward the end of the Vietnam War.

According to a recent study in the New England Journal of Medicine, up to 17 percent of troops returning from Iraq “met the screening criteria for major depression, generalized anxiety, or PTSD [post-traumatic stress disorder].”

“The Bush administration didn’t plan going into the war,” says Paul Reickhoff, Executive Director of Operation Truth, a growing online organization of Iraq veterans. “And they haven’t planned for the back end of the war and the social services that will be needed. It’s an extension of a flawed plan. “

Ricky Singh, of the Brooklyn-based Black Veterans for Social Justice, is also alarmed. His group was helping three Iraq vets a year ago. Now, he says it’s assisting 30 Iraq vets, 18 of whom are homeless, including Noel and his family and a pregnant woman who is expected to give birth this month.

“We know this is the tip of the iceberg, because vets tend to be a group that doesn’t seek out help,” Singh told The Indypendent. The New England Journal study found that of the veterans who met the criteria for a mental disorder, less than 40 percent reported receiving professional help in the past year.

Nationally, there are signs of the same problem. In Cincinnati, Ohio, Charles Blythe, director of the Homeless Veterans Reintegration Program, says his group is already assisting three homeless Iraq and Afghanistan vets, and he expects many more to come. “Once they start bringing them home, we’re going to be flooded with them, just like with Vietnam,” says Blythe, a Vietnam-era veteran. According to the National Coalition for Homeless Veterans, nearly 300,000 veterans are homeless on any given night, and almost half of those are Vietnam vets.

Noel, 25, was born and raised in Flatbush. He was attending New York City Technical College and working as a medical-claims processor when he enlisted in the army in September 2000. He was attracted by both the promised benefits and the chance to “see some new scenery.” Noel served in the 3rd Infantry Division 7th Cavalry as part of the original invasion force, working in fuel resupply. He witnessed the human carnage wreaked by U.S. bombs soon after he crossed into southern Iraq. He also watched friends lose life and limb as his unit was repeatedly ambushed by rebels near Falluja. He left Iraq in August 2003.

Combat experiences such as Noel’s have a strong bearing on whether a veteran develops PTSD. The New England Journal study determined that among troops who engaged in more than five firefights while deployed in Iraq, the prevalence of post-traumatic stress disorder was more than 19 percent. In contrast, the rate of PTSD among Vietnam veterans is currently 15 percent.

“If you saw the way we slaughtered those people, it was disgusting,” Noel said of the war’s beginning. “There would be little kids laying down on the floor. Two- or three-year-olds caught in the crossfire. It was sickening.”

While Noel was trapped in a war zone, the army mistakenly listed him as AWOL and cut off his pay, causing him to lose his home in Fort Stewart, Georgia. Upon returning, he moved into a trailer off-base with his wife, Tamara, and their three young children. When their car died and he was no longer able to commute to work, they decided to move back to New York.

However, Noel was a changed man and found it difficult to keep a steady job, and his family slipped through an almost nonexistent safety net.

Tamara started to notice changes in her husband about a month after they were reunited. “He’d get upset easily. We were arguing all the time. One time we got in an argument and he put me in the car and drove me to some bushes and he said he would kill me if I kept arguing with him. I was really scared. He was never like that before.”

Noel still struggles with his rage, but now he disappears when he feels like he is going to explode. “I don’t know where he goes,” Tamara says. “He tells me sometimes he has to get away from it all.”

“I have an anger problem. I still got that war mentality,” Noel says. “You got that anger in you being around all that death. I still have nightmares. I’m still paranoid sometimes to walk the street, thinking something is going to happen… It’s hard to be in a working situation. You’re always on your guard.”

While Herold sleeps outside and crisscrosses the city looking for assistance, Tamara is temping as a clerk at a hospital and staying at her sister’s home with the kids. Both Tamara and Herold are uncertain of what to do next or even if their marriage will survive. Both refuse to have their children stay in the city’s squalid shelter system.

“We’re willing to work,” Tamara says. “We just need something temporary so we can get on our feet.”

“They are in a very fragile situation,” says Singh, who is trying to fast-track their case so they can get an apartment.

“This whole ordeal is breaking up my family. She’s like she needs to move on with her life. I don’t know what to do.

“I walk around crying every day. I feel lost in my own land; the land I fought for. I don’t know what to do no more. Sometime I just feel like picking up a gun and calling it quits – know what I’m saying? But, something’s got to get better. I didn’t just risk my life for nothing.” Noel paused, unsure if he believed what he was to say next. “There’s a God out there – somewhere.”

For more information, contact Black Veterans for Social Justice at bvsj.org or 718-852-6004.