By A.K. Gupta
It took mere days for the democratic shine on Iraq’s national elections to lose its luster, revealing a festering mass of coercion, intimidation and irregularities. It seems that less than half the eligible voters chose to cast ballots, leaving the victors with a fragile legitimacy that may shatter if they can’t end the U.S. occupation and restore the economy. 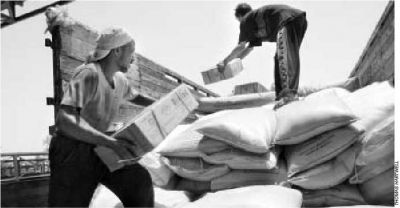 One of the most disturbing irregularities concerned reports that Iraqis were being told that if they didn’t vote, their food rations would be cut off. A Washington Post report from Jan. 30 stated that some officials circulated rumors deliberately to “try to lure voters” to the polls. Khalaf Muhammed, the electoral commission official in charge of a polling station in Saddam Hussein’s hometown of Tikrit, told the Post: “Even though we spread a rumor in the city saying anyone who doesn’t vote will be deprived of their food ration, only ten people voted.”

That rumor was also rife in the Sunni neighborhoods of Baghdad, the Post account added, “gaining credence because voter registration rolls were taken from centralized records for the ration of rice, flour, oil and other staples.”

Freelance journalist Dahr Jamail interviewed numerous voters in Baghdad who said their food-ration agents had to approve them before they could vote. “Two of the food dealers I know told me personally that our food rations would be withheld if we did not vote,” one engineering student told Jamail.

Even according to the Election Information Network, an Iraqi poll-monitoring group established in part by the CIA-linked National Endowment for Democracy, there was “intimidation at 15 percent of polling stations, ranging from assurances that a party had been blessed to outright threats of violence.”

An AFP reporter observed numerous irregularities in Mosul, such as election workers telling voters for whom to vote. One voter, Zahra Ibrahim, 60, after being told to vote for the list headed by interim Prime Minister Ayad Allawi, said, “I really just did what they asked me to do.”

The Financial Times observed, “In the heavily Shia towns of Najaf and Karbala, government officials barred voters whom they believed would support the opposition from entering polling centers.” The allegations came from Allawi party officials, who presumably were referring to the Shiite religious parties that control those municipalities.

Hours before the polls had closed, one election official stated that turnout was a whopping 72 percent. Iraq’s electoral commission quickly clarified the comment as “very rough, word-of-mouth estimates gathered informally from the field.” But it still maintained that “turnout has exceeded expectations throughout the country.” Very quickly, though, turnout was placed at 57 percent or 8 million voters, which is precisely the number the commission estimated before the vote.

On Feb. 4, the New York Times reported that one election official, “Safwat Rashid, a 59-year-old lawyer from Sulaimaniya, in the Kurdish region, was evasive about the turnout, implying it might end up significantly lower than the initial estimate.” Rashid told the Times, “Only God Almighty knows the final turnout now.”

Howard Kurtz, the media critic of the Washington Post, was perhaps the only mainstream media commentator to raise the issue of eligible versus registered voters. After talking to reporters in Iraq and Kenneth Pollack of the Brookings Institute, Kurtz surmised that the number of eligible voters was 17 to 18 million. And this doesn’t include the more than 1 million expatriate Iraqis who were eligible to vote (barely 25 percent of them did). In the end, if 7 million or fewer Iraqis voted overall, this would be a turnout of less than 40 percent, which would make the elections a stunning failure.

One revealing benchmark of the low Sunni turnout came from the largely Sunni Arab province of Salaheddin. The AP reported Feb. 7 that with 80 percent of the polling stations reporting, the United Iraqi Alliance, cobbled together by Shiite ayatollahs, was leading in the province with a total of 27,000 votes. In second place was the Kurdish list.

In Samarra, a city of 200,000, fewer than 1,400 ballots were cast – including Shiite soldiers and police from the south who were allowed to vote there. The turnout was even more dismal in ar-Ramadi, a city of 400,000. According to an unofficial tally, just 1,700 ballots were cast, also including votes by imported police and soldiers. Vote totals in Al Anbar province, which includes Ramadi and Falluja, were put at 15,000.

TO THE VICTOR GOES THE PROBLEMS

But a new government has even bigger problems to confront. Millions of Sunni and Shiite Arabs boycotted the polls as illegitimate under occupation, and apart from the Kurds, the vast majority of Iraqis who voted indicated that their ballot was one against the U.S. occupation. In response, many of Iraq’s present and future leaders rushed to speak out against a timetable for American forces to withdraw, probably because they realize their political survival is dependent on U.S. firepower.

Iraqis are also looking to the new government to restore basic services, tackle corruption and jumpstart the economy. However, the main parties in the victorious United Iraqi Alliance (UIA) have a sketchy track record. They have gained control of numerous municipalities in southern Iraq since the U.S. invasion, but many Iraqis say the religious parties’ rule, particularly in Najaf and Basra, has been marked by incompetence, favoritism and corruption.

Many Iraqis distrust the religious Shiite parties that swept national and provincial elections in the south, seeing them as tied to Iran, where many were based during the rule of Saddam Hussein.
The UIA and the Kurdish slate may join forces, as they possess the two-thirds majority needed to form a new government. But the two slates are split on basic issues. The UIA is calling for a constitution of “Islamic character,” to which the secular-minded Kurds are strongly opposed. And such a move could further alienate Sunni Arabs, who have fundamental theological differences with Shiism. The Kurds are also demanding outright independence, whereas the Shiite ayatollahs who guide the UIA want a strong central government.

Nonetheless, in these image-building exercises, perception is in the eye of the beholder. Anecdotal reports from Baghdad state that “the mood” among the public has changed since the election, with many optimistic that the days of car-bombings and open firefights may be drawing to close.

But for the resistance, who killed scores of security forces after the post-election lull, that depends on the withdrawal of U.S. forces. The deciding issue is whether the resistance will continue to draw popular support. There are legions of Sunnis and Shiites who still feel disenfranchised. If the victorious parties revert to form, squabbling among themselves, rewarding supporters while letting basic services crumble, and leaving the U.S. occupation untouched, then it’s only a matter of time before Iraqis turn to those who shunned the electoral system.