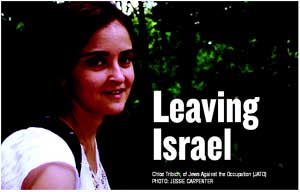 Ivisited my maternal grandfather’s grave for the first time in 1999 while studying abroad in Jerusalem. He was German and had arrived in New York in the 1920s with my Polish grandmother. Many of their family and friends were eventually killed in the Nazi Holocaust, and the apartment I grew up in was furnished with an armoire shipped from Europe by relatives who, at the last minute, were prevented from leaving.

My grandfather immigrated to Israel before he died; his last wish was to be buried in the soil of the Jewish homeland. At the grave, I stumbled through the mourner’s Kaddish with cousins whom I had only just met, waiting for a moment of connection – a sensation of coming home, of connection to a family and heritage from which I had been estranged. This moment as I had imagined it did not come. Instead, the experience marked the beginning of a political transformation.

I grew up in a secular, socially progressive household. My father and his parents identified closely with Judaism, but for reasons that had little to do with organized religious practice or Zionism. Rather, they identified suffering of any sort – especially their own – as a distinctly Jewish experience, and attributed their superstition about provoking bad luck to their old-world Jewish background.

It was only when my stepmother initiated our membership in a liberal reform synagogue that I became actively curious about Jewish history, religious practice, and the modern state of Israel. This was an interest that I pursued through college.

As I traveled throughout Israel – that is, on the inside of the 1948 green line – I was struck how the Israeli government’s racist policies, such as the systemic denial of state resources to communities of Palestinians with Israeli citizenship, infected even the most routine activities. It was small incidents that made clear the consequences of this unjust system. Getting kicked out of a store while shopping with a dark-skinned friend and hearing the Hebrew University program director discuss the importance of avoiding Arab neighborhoods in his orientation speech shattered the notion that Israel was a safe haven, even for the people to whom I felt closest – like my friend who was ejected from the jewelry store.

One of the most memorable moments was my cousin’s pained description of her husband’s military service in Gaza. The husband chose to go after much internal moral wrangling. But his service was ultimately a good thing, my cousin justified, because unlike many of the soldiers, he was compassionate, allowing pregnant women to pass quickly through checkpoints. In light of the racism I had witnessed, her reasoning was horribly distressing – even more so because I respected her political involvement with antioccupation movements like Women in Black and liked her personally.

I vowed at that moment never to sacrifice basic logic to quell discomfort over my own privilege.

A year later, in 2000, the current Intifada erupted. I joined a group of Jewish activists in New York to form Jews Against the Occupation (JATO) to work in solidarity with politically likeminded organizations. We understood “solidarity” to mean that we would take the lead from our Palestinian allies in defining the terms of a movement that would lead to justice for the people of the region. My cousin’s explanation of her husband’s military service underscored the need for the oppressed to shape the struggle – after all, the vast majority of Palestinians were demanding an end to the occupation, not a more compassionate occupying army.

JATO adopted the Palestinian Refugees’ Right of Return as a demand after it was highlighted by the Palestinian movement in the U.S. This was not an easy decision. We debated the extent to which this would compromise our relationship with liberal Jews who might otherwise be sympathetic, and how important this constituency would be to the broader struggle. To this day I believe JATO has survived because it has prioritized moral clarity over assuming the burden of broad Jewish representation.

After five years, this work remains intensely challenging. The conflation of Anti-Semitism with Anti-Zionism can make the most tentative opposition to Israeli state violence intensely controversial. One of my favorite activist moments was chanting “Judaism, yes; Zionism, no” alongside Jews, Arabs, Palestinians and other allies at an Israel Day Parade counter-demonstration. This was our only chant that drew surprised expressions instead of angry retorts from the marchers and spectators. By reaffirming Jewish identity as separate from the Israeli state we were able to crack – if only for a moment – a central assumption of Zionism.

Nevertheless, responding to challenges to one’s Jewish authenticity remains difficult. I will never forget the time a college classmate asked if I really considered myself Jewish after I said that we could never be truly safe living in a state premised upon Jewish privilege. I empathize with the feelings of people like my grandfather, who supported a Jewish state after witnessing the Holocaust. However, I do not think that Zionism – like any social system that depends on enforcing unequal classes of human beings – provides us with genuine security.

By security, I mean not only freedom from violence, but the guarantee of health care, housing, meaningful work, education, and the space for creativity and possibility that makes life pleasurable and unique.

I do my political work because, and not despite, of my concern for the safety and wellbeing of those that I love – family, friends and partners in struggle. The horrific violence of recent weeks

proved to me more vividly than ever that the Israeli government’s interests are distinct from even those of its own Jewish citizens, let alone the direct victims of its violence. The massacres of

Lebanese and Palestinian civilians and continued destruction of Palestinian homes and livelihoods constitutes a moral crime of gargantuan proportions. The invasions have done nothing to advance the Israeli government’s purported goal of eliminating support for anti-Israel militias; it certainly does not make Jews, Israelis or U.S. citizens safer.

The summer I traveled in Israel, inching towards my current politics, I abandoned the possibility of an uncomplicated connection with a Jewish homeland. But in turn I found a new one, based not in geography but in struggle, and premised on a shared vision of a just future and a commitment to get there.