On April 4, 1914, a mass rally of the Conference of the Unemployed took place at Union Square. Between 6,000 and 7,000 unemployed men and women, Industrial Workers of the World (IWW) members and anarchists demonstrated on this day in the name of food, shelter and work. Throughout the square, black flags, inscribed with statements such as “Hunger” and “Bread or Revolution,” were held high and the mood was angry and militant. 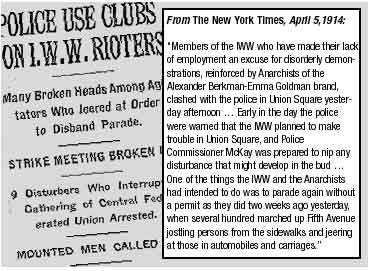 As the crowd surged toward Fifth Avenue in the form of a massive parade, they were immediately met by a contingent of more than 400 police officers. Led by a mounted unit, the police charged directly into the crowd, brandishing their clubs left and right and accomplishing the brutal suppression of the parade by way of broken skulls and bloody noses. One participant, IWW organizer Joe O’Carroll, was beaten over the head so severely that witnesses claim he would have been killed were it not for the activist Rebecca Edelsohn protecting his body with her own. In addition to the beatings, several arrests occurred, many on the grounds of parading without a permit.