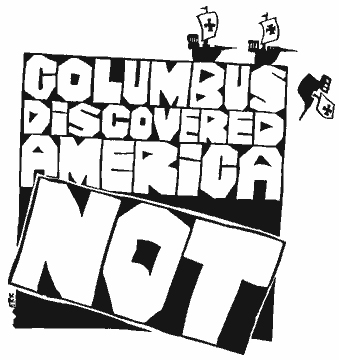 Jessica Lee: Based on your research on the roots of federal Indian policy in the United States, discuss the timing of Pope Benedict XVI’s visit to the United States and his address to the United Nations three days before the Seventh Session of the U.N. Permanent Forum on Indigenous Issues began April 21. What does it signify for Native people who are still confronting issues associated with Christian colonization of their ancestral lands and the resulting U.S. laws?

Steven T. Newcomb: What the pope’s visit signifies for me is the unfinished business of challenging the Doctrine of Christian Discovery and Dominion in U.S. law. Pope Benedict XVI’s visit to the United States, just prior to the Seventh U.N. Permanent Forum on Indigenous Issues, heightens my awareness of the fact that the Vatican has yet to publicly acknowledge its role in Christendom’s colonization and domination of the Western Hemisphere. Just after Columbus’s first voyage to islands in the Caribbean, Pope Alexander VI issued several documents in 1493. These documents called for non-Christian “barbarous nations” to be “subjugated” and brought to the Catholic faith and Christian religion “for the propagation of the Christian empire.” In keeping with the terms and tenor of these documents, the Catholic monarchs of what is now known as Spain invaded indigenous lands and assumed “lordship” and “dominion” over those lands. They began a reign of terror against indigenous peoples, and according to Bartolome de las Casas, the great advocate for the Indians, the Spaniards killed millions of Indians and enslaved massive numbers of the survivors. Fully supported by the Vatican, the Spanish also instituted the encomienda system which was horribly oppressive and destructive to the traditional way of life of Native nations and peoples. [Editors Note: The encomienda system required Native people to pay tribute from their lands, which themselves were granted to conquistadors.]

When Pope Benedict XVI made his statement in Washington, D.C., about “the injustices endured by the native American peoples” and about people having been “forcibly” brought to America “from Africa as slaves,” he made it sound as if the Vatican and the Holy See had nothing to do with such injustices or the enslavement of Africans. The truth of the matter is that the office of the Holy See (the papacy) fully endorsed and authorized a regime of oppression in African during the 15th century and also in the Americas. One such document is the bull Romanus Pontifex issued by Pope Nicholas V to King Alfonso V of Portugal in 1455. In this document, Pope Nicholas V granted the king of Portugal “free and ample faculty” to “invade, capture, vanquish, and subdue all Saracens and pagans whatsoever, and other enemies of Christ wheresoever placed.” The Holy See further authorized the king to take over all the lands, “possessions, and all movable and immovable goods whatsoever held and possessed by them [non-Chrisitans] and to reduce their persons to perpetual slavery.” In 1514, Pope Leo X reaffirmed this grant, permanently.

The Vatican likes to focus on a much later decree issued by Pope Paul III in 1537. Known as the bull Sublimis Deus, the document acknowledged Indians as human and called for the property, dominion and liberty to be respected. However, as beneficial as it sounds, this bull was issued after more than 40 years of genocidal brutality under the authorization of papal decrees from the 15th century that, as mentioned previously, called for the subjugation of Indian peoples.

J.L.: What is the update on your campaign to convince the Vatican to revoke the 1452 and 1493 decrees in order “to demonstrate solidarity with indigenous nations and to show willingness to honor and respect (Native) inherent lights to liberty, justice, and peace?” Why is this important in the 21st century?

S.N.: At last years U.N. Permanent Forum on Indigenous Issues, a small group of Indigenous representatives sat down with Nuncio Migliore, Nuncio (Ambassador) of the Permanent Observer Mission to the United Nations. We had a spirited discussion of the legacy of the Inter Caetera papal bull and other Vatican documents. Such Indigenous organizations as the Indigenous Law Institute, the American Indian Law Alliance and Tonatierra were represented in this meeting. We have received some correspondence from Nuncio Migliore regarding this issue and we look forward to delivering our response to him during this year’s U.N. Permanent Forum on Indigenous Issues. We also looking forward to continuing our dialogue with the Vatican regarding these difficult and challenging issues.

Interestingly, the Vatican has expressed support at the United Nations for the Declaration on the Rights of Indigenous Peoples, which was passed (albeit not unanimously) by the United Nations on Sept. 13, 2007. (Canada, New Zealand, Australia and the United States voted against the Declaration.) I, for one, certainly view this as a positive development in the 21st Century. Now, we just need to see the Vatican take the next step by explicitly renouncing the doctrine of Christian Discovery and Dominion that it played such a prominent role in promulgating.

J.L.: In September 2007, the U.N. adopted the Declaration on Rights of Indigenous Peoples. Discuss this historic moment briefly in the context of 500 years of warfare, persecution and exploitation of indigenous lands largely by the European conquest to overthrow “barbarous” nations in order to propagate the Christian religion and accumulate riches. What could this declaration mean for revisiting U.S. laws that are based on the doctrine of Christian discovery?

S.N.: Passage of the Declaration on the Rights of Indigenous Peoples is very important. Article 3 of the U.N. Declaration on the Rights of Indigenous Peoples states: “All Indigenous peoples have the right of self-determination. By virtue of that right they freely determine their political status and freely pursue their economic, social, and cultural development.” Given that this exact same language, minus the word “Indigenous,” is found in the International Covenant on Civil and Political Rights (ICCPR) and the International Covenant on Economic, Social and Cultural Rights (ICESCR), the question remains, Why did it take an additional and separate human rights instrument to acknowledge that “Indigenous peoples” possess the human rights that all “peoples” are said to possess? My short answer is that this is a direct effect of the Doctrine of Christian Discovery and Dominion and the fact that the international law system of Christendom did not recognize American Indians as being truly human. As the international law scholar Henry Wheaton expressed this prejudice, “The heathen nations of the other [non-Christian] corners of the globe were the lawful spoil and prey of their civilized conquerors.” The U.N. Declaration on the Rights of Indigenous Peoples is a very significant shift toward overturning the institutionalization of such racist and religious bigotry in international law and, hopefully, in the domestic law systems of countries such as the United States.

J.L.: At the end of your book, you declare that we (Native and non-Native Americans) need to challenge the status quo by decolonizing our minds and imagining another world possible based on “an abiding appreciation of the immense beauty of life.” Given that those in political and economic power likely will not share that new vision because it would challenge the existing power structure, how can this “mental revolution” actually be successful in bringing about social and environmental justice?

S.N.: It’s true that “those in political and economic power” are not likely to be interested in (and may be very much against) a “new vision because it would challenge the existing power structure.” I predict that in the very near future, however, Mother Earth is going to compel us all into a fundamental paradigm shift. As the ecological systems of the Earth continue to break down, as the rate of cancer and other deadly diseases continue to spike, as the climate changes in very dramatic ways, people will continue to awaken to the fact that the current lifestyle of the planet is ecologically and biologically unsustainable.

For example, it was recently revealed that in the Pacific Ocean there are 6 pounds of plastic for every pound of plankton. Because the plastic is inorganic it is not able to completely decompose. The plastic breaks down into little tiny pieces that are ingested by birds, fish, and other sea life. It is choking the oceans. Additionally, there is a gigantic pile of trash in the Pacific Ocean that, depending on the story you read, is as big as Texas, as big as the Untied States, or (according to a recent story in Britain’s Daily Mail) twice as big of the United States! The trash extends into the ocean water to a depth of 25 to 200 feet deep. More than one million gallons of radioactive waste has leaked into the ground and the ground water from Hanford Nuclear facility in Washington State. One can only hope that these and many other dire ecological impacts to the planet will eventually result in a shift away from a Subdue and Domination Model of Life to a set of values and a lifestyle predicated on a deep and abiding respect for the very basis of the biological fabric of life on Mother Earth. Indigenous knowledge and wisdom has a lot to offer along these lines.