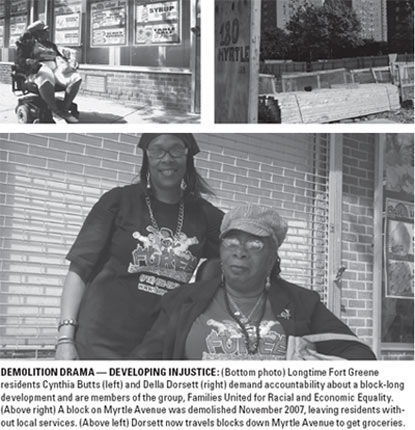 For her entire life, Cynthia Butts, 53, has lived in a tall red brick building on Myrtle Avenue in Fort Greene, Brooklyn. The block she calls home is now defined by an unusual silence. Across the street from her residential complex is a vacant lot where a lively stretch of commercial stores and restaurants once stood.

“Everything has changed so drastically,” says Butts, a resident of the 1,636-unit Walt Whitman complex at 287 Myrtle Avenue near Flatbush Extension.

It will be a year this November since billionaire — and possible mayoral candidate — John Catsimatidis tore down an entire block on Myrtle Avenue between Navy and Prince Streets. His original plan was to build 660 luxury condominiums with 200 affordable units and ground-floor businesses. But Catsimatidis has already abandoned plans to build the affordable housing units.

What was lost was significant for the local community of more than 4,200 people — an Associated supermarket, a newly constructed Duane Reade, a laundromat, restaurants and a bodega.

“It’s not fair when we don’t have a say on what is going on in our community,” says Butts, who volunteers with Families United for Racial and Economic Equality (FUREE), a group bringing attention to the dismantling and gentrification of many communities in Brooklyn. The demolition has been devastating to residents who relied on the block as a community business center.

Residents now have to walk more than six blocks up Myrtle Avenue to obtain goods and services, including food from the now nearest grocery store, Bravo. 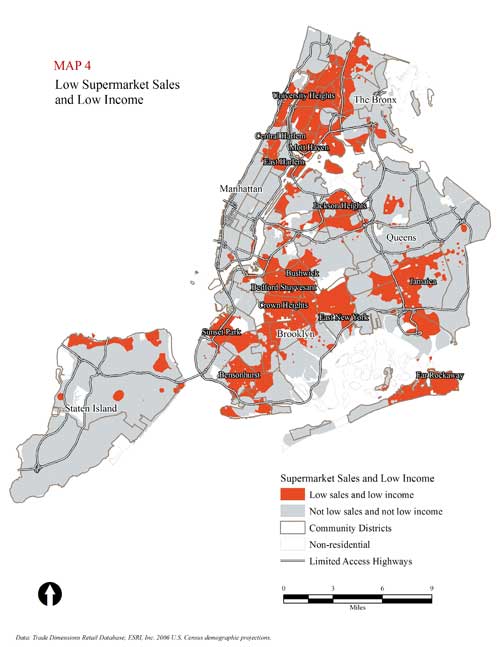 “In the chair here, it takes about 10 minutes,” says Della Dorsett, 67, who travels by electric wheelchair and can only walk short distances. “But look at my other friend who has a home attendant that has to push her. That’s not good. That’s why we want to get something that’s convenient for us down here,” says Dorsett, also a member of FUREE. “If I don’t have anyone to help me, then I got to bag it in the backpack on the back of the chair, and that’s not good for the chair.”

Dorsett is one of many living in the neighborhood who has a disability.

“As you can see, a lot of people, handicapped people, wheelbound people, have to go out of their way to get basic things,” Butts says. “I don’t think it is fair at all. Especially when you have a big empty lot and are not doing anything.”

Fort Greene is just one out of many neighborhoods in the five boroughs that have recently lost grocery stores. A recent report by The Food Trust found that in the last six years, New York City has lost one-third of its grocery stores — predominantly affecting lower-income neighborhoods (See infobox.)

Catsimatidis, who is the owner of the high-end Gristedes supermarket chain, said he would begin construction immediately after the demolitions were finished in late 2007 but construction has yet to begin.

Catsimatidis told the New York Daily News in March, “If we start digging in about a month or two, [the supermarket and drugstore] should be done within a year if the world doesn’t fall apart with the real estate market.”

However, now there is speculation that the project will not even be built. “The developer has hinted that he may deep-freeze the huge project because the real estate market is going south,” someone wrote on the blog curbed.com.

Several new condo buildings have gone up in the surrounding area in the last several years, giving long-time residents like Butts and Dorsett the feeling that people like them are no longer welcome. Butts says that many people in the neighborhood have already moved to other communities.

“They are tearing things down and building things up, but who is moving in?” Butts says. “When you look around, you notice that we have a lot of vacancies.”

Meanwhile, members of FUREE have been trying to arrange a meeting with Catsimatidis for more than a year, in order to voice their concerns about still not having a grocery store, as well as the increase in luxury condos in the area. 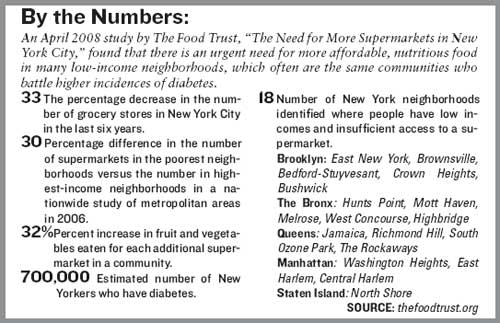