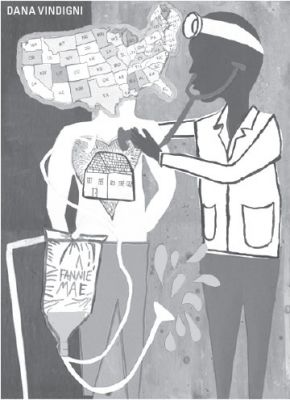 The housing crisis has been the elephant in the room that neither major presidential candidate will acknowledge. But now our debt sickness has moved beyond housing default into a credit crisis and financial meltdown. Millions will likely lose jobs, savings, promotions, healthcare and faith in the economy. There is no greater issue for the presidential elections and beyond.

This much we know: Housing pain continues to spread through the land. The most vulnerable — those who have subprime loans and fell victim to predatory lenders — were hit hardest and first. In a market economy vulnerability stems from bad credit, low savings and low income.

Recent data from the Mortgage Bankers Association show that prime borrowers are increasingly late and missing mortgage payments. More than half a million mortgages entered the foreclosure process between April and June of 2008. Nearly a million folks will be in or near foreclosure when the presidential election occurs.

The lack of discussion stems from the unwillingness to face the following economic realities. Since the mid-1970s, the income of the lower 60 percent of earners has been stagnant. Millions rely on rising debt, lottery tickets, house price appreciation and schemes to survive. Around 50 million people lack health insurance at any given time. College costs are rising more than 6 percent a year and students borrowed more than $97 billion for college in 2007.

In a sharp recession, the well-connected hit up Uncle Sam first to assure their priorities are backed by taxpayer money. Fannie Mae, Freddie Mac, AIG, Ford, GM and the banks have muscled their way to the trough and will likely be the best fed. This amounts to over $300 billion in direct aid and loans, on top of the $400 to $500 billion annual deficit the government is running, and whatever the cost of the bailout plan that emerges. Unfortunately, the rest of us will have to hope for ample leftovers.

WHAT IS FANNIE AND FREDDIE?

Fannie Mae was created during the Great Depression to decrease foreclosures and increase homeownership. Over its 70 years it bought, guaranteed, owned and resold mortgages, allowing more credit to be extended to more families. In 1968 Fannie was re-chartered as a public company, removed from official government status, and in 1970, Congress created Freddie as competition for Fannie. Fannie and Freddie exist to facilitate, ease and cheapen home ownership. They do this by acting as liaisons between international investors and mortgage seekers.

Fannie and Freddie buy mortgages, mix them together to sell all over the world and guarantee repayment. This reduces risk and assures global savings flow in to support home purchases here. Trillions of dollars in bundled mortgages and mortgage guarantees were written by Fannie Mae and Freddie Mac.

Nearly half of the $11 trillion in U.S. mortgage debt was originated since 2001. Fannie Mae and Freddie Mac either own or guarantee $5 trillion in mortgages. As of June 30, 2007, foreign individuals and entities — including 66 Central Banks — held more than $1.4 trillion in U.S. agency securities. Over the last few years the United States borrowed and spent about 50 percent of the available international savings.

As we commit to all sorts of aid and loans, we are pledging our future tax payments to shore up big business. This may be well worth doing, but on what basis are some firms bailed out and others allowed to die? Which jobs, pensions and health insurance plans are worth keeping? So far, regulators and senior managements meet behind closed doors and make agreements that are only partially disclosed after the fact. We are now preparing a massive bad debt buy-out fund for banks. Again, no public comment or input is being sought.

For all of The Indypendent’s current and recent economic coverage, follow the links below!