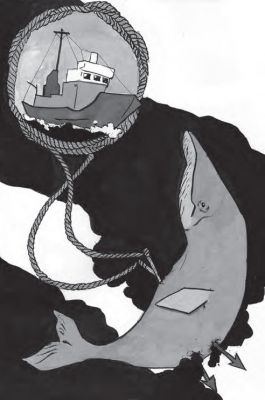 The Sea Shepherd Conservation Society cruised into Hobart, Australia, in early March from an ambitious anti-whaling campaign in the Southern Ocean. In this isolated part of the world with the Antarctic ice and rock as its backdrop, a fierce battle is being waged to stop Japanese whale hunters from poaching hundreds of piked whales and endangered fin whales inside the Southern Ocean Whale Sanctuary.

In recent years, the Sea Shepherd fleet has left politics on land to engage in direct action on the high seas — putting the enforcement of conservation laws into the hands of a few bold activists who sabotage hunts by putting themselves in the line of fire. This has decreased the number of whales harvested, and in turn, cut into the whalers’ profits. It’s no surprise that poachers are now willing to go to extremes defending their lucrative operations.

In December, I joined an international crew of volunteers on the Sea Shepherd’s flagship, the Steve Irwin, and we headed south. With a newly acquired trimaran and a third vessel lurching in a secret location, the anti-whaling fleet was stronger than ever.

Commercial whaling was banned by a global moratorium in 1986. However, the Japanese exploit a loophole in International Whaling Commission regulations that allows a limited number of whales to be killed for scientific research. Japan harvests nearly 1,000 whales every year — primarily minke whales. On top of that, whales are also harvested in a sanctuary established by the United Nations within the Antarctic Treaty Zone.

On Jan. 5, after a month at sea, the crew on the trimaran (named Ady Gil after its donor) located the whaling fleet and immediately approached them from the south. Our ship pushed ahead at full speed from the north. Our secret third vessel, the Bob Barker, came in from the west; it had been at sea for more than a month, trying to reach the whaling grounds to join in on the action. With ships approaching from all directions, there were few places the whalers could run.

This stand-off lasted several hours — until the Japanese decided to retaliate. The 800-ton harpoon ship, Shonan Maru 2, closed in at a fast speed and rammed the 14-ton Ady Gil, tearing apart its hull. As the ship started to sink, the crew successfully evacuated to another one of our ships. After the ramming, all the whaling ships ignored the Ady Gil’s distress signal and disappeared over the horizon to resume whaling.

Although one vessel short, we weren’t prepared to give in. We continued the campaign, but it took another month before we located the whaling fleet again.

Having returned to Australia for refueling, we were well stocked and able to stick behind the factory ship Nisshin Maru for a while. The whalers rely on the slipway of this floating abattoir to haul the whales on board for processing, making this the most effective place to shut them down. For three weeks in February we escorted the factory ship and stood watch at its slipway. From the moment we were with them, Sea Shepherd’s Captain Paul Watson made it clear that if they were to attempt to transfer a whale, collisions would be inevitable. No whaling took place for nearly a month.

Ady Gil Captain Pete Bethune believed diplomacy was not going to get him justice after the collision, which he considered deliberate and which endangered the life of his crew and destroyed his $3 million vessel. In a “mission impossible,” he left under the dark of night on a small jet ski on Feb. 15 and secretly boarded the Shonan Maru 2 in an attempt to make a citizen’s arrest of its captain. The captain of the Shonan Maru refused and instead detained Bethune, forcing New Zealand and Japanese officials to meet and discuss the situation in the days following the boarding. Bethune was taken back to Japan and arrested on March 12, charged with “vessel invasion.”

Meanwhile, the International Whaling Commission is considering a new proposal to allow the resumption of commercial whaling — in effect lifting the global moratorium that has attempted to limit commercial whaling for the last 25 years. The new plan would allow for “regulated hunts” while ending whaling in the Southern Ocean. The proposal will be discussed at the next commission meeting in Agadir, Morocco, later this year.

For the Sea Shepherd crew one thing is clear: the battle to save the great whales is far from over.

Wietse Van Der Werf is a volunteer with the Sea Shepherd Conservation Society.