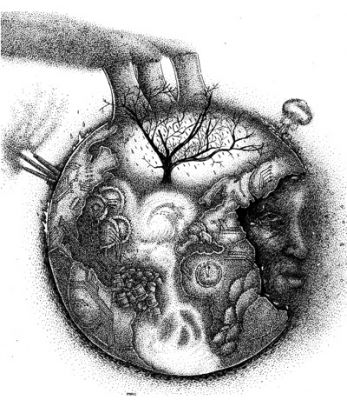 Cancún is slowly slipping into the Caribbean Sea. A combination of climate change, natural weather patterns and disastrous, hell-for-leather tourist development along the narrow strip of Mexican coast is dragging the resort town back whence it came.

Gargantuan hotel complexes built too near the shore and the eradication of coastal vegetation that held the beach together, along with rising sea levels and stronger hurricanes meant $70 million was spent last year to replace the sand swallowed by the sea. This was on top of a similar $19 million beach restoration in 2006.

The next dredge and restoration won’t be long coming. Unlike the global environment, Cancún is so profitable to Mexican and foreign capital — income is estimated at $3 billion a year, about one-fourth of Mexico’s entire tourist economy — that it must be saved.

But it comes at the expense of massive undersea devastation from dredging millions of cubic yards of sand and the impact when all that sand washes back and buries coral reefs that are the breeding grounds of myriad oceanic species.

The defense of Cancún contrasts markedly with the situation in Vanuatu, an archipelago nation that is being forced to relocate hundreds of people from encroaching South Pacific waters. Or the plight of the people in the small Alaskan village of Kivalina, who are desperately erecting sea walls to keep the Chukchi Sea at bay.

Cancún was therefore perhaps a perfect location and metaphor for the 16th U.N. Framework Convention on Climate Change, which ended Dec. 10. As Cancún slowly slides toward the abyss, so the conference slipped below the mainstream media’s radar and other coastal regions around the globe are left to drown and we all stifle as global warming continues under the business-as-usual climate.

It’s always been difficult to pinpoint where the truth ends and the lies begin with international climate conferences, but thanks to WikiLeaks we have a much better idea. In Copenhagen, during high-profile climate negotiations in 2009, bribery, blackmail, bullying, threats and spying were the order of the day. The Guardian reports:

“The U.S. diplomatic cables reveal how the U.S. seeks dirt on nations opposed to its approach to tackling global warming; how financial and other aid is used by countries to gain political backing; how distrust, broken promises and creative accounting dog negotiations; and how the U.S. mounted a secret global diplomatic offensive to overwhelm opposition to the controversial ‘Copenhagen accord,’ the unofficial document that emerged from the ruins of the Copenhagen climate change summit in 2009.”

You don’t have to be a wild-eyed revolutionary to conclude that the United States is intent on remaining the world’s only superpower and discards all other considerations, even the possibility of precipitating civilization’s collapse. As the tectonic plates of world power shift, the governing U.S. and corporate elite are locked in a zero-sum game with the other major economic players that are trying to supplant them in a planetary dance of death.

The never-ending competitive drive for profit and the imperial machinations that flow from it dictate the chronic inability of world leaders to cobble together any serious deal to arrest planetary ecocide.

In Cancún, the only way negotiators could reach a “fairly modest” agreement that “do[es] not require the broad changes that scientists say are needed to avoid dangerous climate change” was by ignoring their own rules on decision making and overruling the objections of countries like Bolivia, according to The New York Times.

As Greenpeace International Climate Policy Director Wendel Trio commented, “Cancún may have saved the process but it did not yet save the climate.”

THE WORD FOR WORLD IS PROFIT

Capitalism is an exploitative global simplification project. For example, it is difficult to efficiently extract profit from a forest teeming with plant and animal life. However, if that forest is replaced by fast-growing eucalyptus trees, then profit extraction is greatly facilitated. Hence, at Cancún, one of the few concrete outcomes was enshrining as an “achievement” the U.N. scheme known as Reduced Emissions from Deforestation and Degradation (REDD) despite widespread opposition. A Friends of the Earth report on REDD released on the eve of the conference described how corporations were being financially rewarded for ransacking and burning forests and converting them into monoculture plantations while allowing developed countries to receive carbon credits.

The only other tangible result was an agreement on technology transfer and finances — though there was no specific plan for funding.

Internationally, the Obama administration is bent on derailing climate talks and deregulating the only internationally binding climate treaty — the 1997 Kyoto Protocol. This is despite the fact that the United States never signed on, and the Kyoto Protocol’s weak limits on reducing the rate of build-up of greenhouse gases in the atmosphere are incapable of preventing rapid climate change.

The United States, flanked by Russia, Canada and Japan, wants to turn Kyoto’s binding limits into voluntary emissions controls varying from country to country. Under this new deregulated regime, no onus will be placed on the industrialized nations historically responsible for the ecological crisis, nor will an overall global emissions target be enacted. A direct confrontation in Cancún was avoided only by punting the decision to extend the Kyoto Protocol, which expires in 2012, to the November 2011 round of climate talks in Durban, South Africa.

Domestically, the Obama administration is as committed to developing fossil fuels as the Bush administration was. On Oct. 28, The New York Times noted that in the five years prior to October 2010 the Interior Department had approved more than 73,000 oil and gas leases. Last March, Obama announced the opening of much of the Atlantic seaboard to offshore drilling, claiming it was a safe endeavor no longer prone to spills.

Obama’s other priorities include “clean” coal technology — a technology that does not currently exist; the development and expansion of “safe,” “clean” nuclear power — a technology that will never exist; a new oil pipeline from Canada’s tar sands; continued subsidies for ethanol from corn; and a large expansion of ethanol production from agro-fuels. And the White House may soon approve offshore drilling in the Arctic.

In contrast, the Interior Department has green-lighted only one offshore wind project and not a single solar project. A plan to build, for a mere $5 billion, a 6,000-mega¬watt offshore wind farm along the East Coast with a more efficient power transmission grid, will be financed by corporations if the project can clear regulations. The amount of energy is equivalent to five large nuclear plants but for a small fraction of the cost — not to mention radioactivity. Despite this, there is no money forthcoming from the federal government.

Even as the U.S. government cannot develop renewable energy domestically because it is supposedly too expensive or unreliable, the Pentagon is ramping up its renewable capacity. According to The New York Times, U.S. military commanders “have come to see over-dependence on fossil fuel and renewable technologies — which have become more reliable and less expensive over the past few years — as providing a potential answer. These new types of renewable energy now account for only a small percentage of the power used by the armed forces, but military leaders plan to rapidly expand their use over the next decade.”

So, if our elected leaders refuse to take protecting the environment seriously, what is possible? Can we have renewable energy and ditch fossil fuels? How are we going to mount a campaign to force through real change?

First, can we obtain all our energy from renewable energy sources?

Scientific American reported in 2008 that the United States could obtain 69 percent of its electrical needs from solar energy alone by 2050 with the input of $420 billion over the next 40 years, less than half of what we spend on military and intelligence agencies in one year. This alone would reduce U.S. carbon dioxide emissions by 62 percent compared to 2005. A more recent Scientific American report claimed that 100 percent of global energy could come from renewable sources by building 3.8 million large wind turbines and 90,000 solar panels in 20 years. This sounds like a lot until you compare it to the 80 million cars manufactured every year.

These examples indicate that moving the world toward a low-carbon, clean energy future is a social and political problem, not a technological one. It’s not hard to outline how to redirect the U.S. economy toward providing millions of jobs, cleaning up the atmosphere and creating a better, healthier standard of living.
Such measures could include:

• Creating millions of real green jobs to build a new energy infrastructure and electricity power grid
• Ending the wars in Afghanistan and Iraq and withdrawing all troops immediately
• Re-regulating corporations in the interests of health, safety and protection of the environment
• Shifting subsidies away from fossil fuels and toward renewables
• Increasing taxes on corporations and the rich to pre-Reagan era levels, and using those revenues for worker retraining programs
• Instituting a moratorium on deep-sea off-shore drilling, mountain-top removal for coal extraction and hydrofracking for natural gas
• Implementing a massive government program of energy-conservation retrofitting of residences
• Updating the ramshackle and inadequate sewage system
• Building city-wide, regional and national public transit systems while pedestrianizing downtown urban areas and building more bike lanes.

But unless we can build a working-class-based movement to organize and fight for such a scenario, the priorities of the corporations will always come first — even if they are undermining their own existence in the long run.

People are already fighting back and we can take inspiration from the revolt of students and workers in Europe and the revolt of workers and peasants in Latin America, as well as learning about periods such as the 1930s and 1960s when it was the people of the United States who led the world in social revolt and left-wing political organizing.

Ultimately, the problem is systemic. To paraphrase Marx, any class-based exploitative social system eventually becomes a fetter to further social development. As coral reef researcher J.E.N. Vernon chillingly reports in Yale Environment 360, “Unless we change the way we live, the Earth’s coral reefs will be utterly destroyed within our children’s lifetimes.” Note that Vernon does not say grandchildren’s lifetimes.

We need to build a socio-ecological movement that takes up the slogan “System Change, Not Climate Change” because Cancún illustrates once more that our leaders are impervious to the arguments of science, the evidence before their eyes or the moral imperative to act in the interests of those who elected them.

Chris Williams is a professor of physics and chemistry at Pace University and author of Ecology and Socialism: Solutions to Capitalist Ecological Crisis.

House Republican leaders made headlines shortly after the mid-term elections when they announced they would use their new majority position to launch investigations against climate scientists. However, one group of scientists is ready to confront the GOP’s fossil-fuel funded antics.

Led by Dr. John Abraham of St. Thomas University (MN.), the Climate Science Rapid Response Team is a group of 40 leading scientists who will be available to provide rapid, high-quality information to media and government officials.

It’s an unconventional step for scientists who tend to shy away from public debate. But with their field under unprecedented attack and the U.S. populace’s willingness to even acknowledge the existence of climate change receding faster than a mid-summer glacier, Rapid Response Team members decided bolder action was necessary.

“There is a deep divide between what is understood by climate scientists and what is known by media and the general public,” Abraham wrote in an email to The Indypendent. “We are hoping to bridge that divide by providing highly-accurate information to the public and further the discussion in a civil manner.”