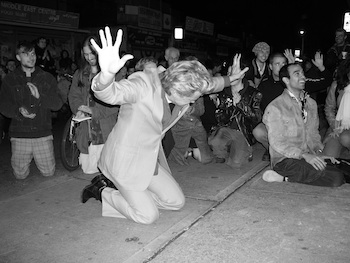 The Madison rotunda is full of a spiritual presence in the thousands of shouting citizens. Unlike many of the collective incantations I’ve witnessed in recent years, there is that progressive anger mixed into the singing. At the root of the power of the right-wing apocalyptic Christianity is the collective ecstasy of singing and praying, repeating beliefs in unison. We have seen the results: the warmongering and homophobia and earth-hatred that grips our politics. For years the progressive community has been flummoxed by the strength of the personal claim that a right-wing fundamentalist can have.

In Madison there is the very rare demonstration of a politically left spirit world, a whirlwind of vibrating smiles and flung arms and hands — and the spectacle is like a presence crashing through from Paul Robeson, from Sojourner Truth, from Emma Goldman. It is a coming back of the great marches in the 1930s around Union Square that were labeled “labor turmoil” by The New York Times — and now the Times is doing that again.

We departed Madison with memories of the labor and civil rights movements, but also we could feel the Battle of Seattle. The student-labor coalition, the race, gender and class diversity in the rotunda, took us back to November of 1999.

A grandmother from Eau Claire, Wis., stops Savi and Lena and me on the marble balcony and begins to confess it all, her whole life, she is wide-eyed and singing her words — and she will tell us her history up to that moment. She is a lifelong nurse who raised a family with her electrician husband Hal. Her present moment is so glorious that she is pouring her life through it. We just stand there and take it in.

People are finding their lives in Madison. Or, their lives are living things and are finding them. It’s hard to figure it out but it’s easy to see. A methodical thief wants to take their money from them, but the seizure by this returning presence of life, this Spirit, is overwhelming the old subject of the Tea Party governor. You start by shouting “My life matters!” and then a roaring cataract comes up through your body and the language triples in volume and the words change to “My life is here now!”