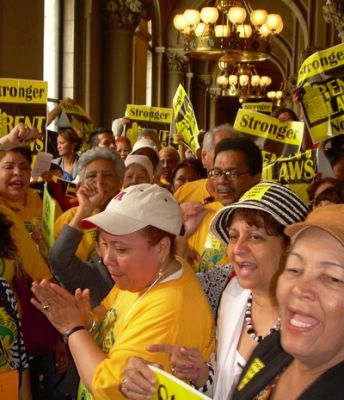 New York State’s rent laws have been renewed — with only token improvements.

More than a week after the laws expired on June 15, the “three men in a room” — Gov. Andrew Cuomo, state Senate Majority Leader Dean Skelos, and Assembly Speaker Sheldon Silver — agreed to extend them for four years.

The bill raises the rent at which vacant apartments are deregulated from $2,000 to $2,500 a month. It also increases the income level at which occupied apartments that cost that much can be deregulated, from $175,000 a year to $200,000. And in buildings with 35 or more units, it lowers the amount that landlords can raise monthly rents for renovations, from 1/40th of the cost of the work to 1/60th.

Tenant activists call that grossly inadequate. They had demanded that Albany repeal the 1997 vacancy-decontrol law, put buildings that leave the Mitchell-Lama or Section 8 programs into rent stabilization, and give New York City the right to enact stronger rent laws on its own.

“The bill we got is not what we’ve been fighting for by any means,” says Mario Mazzoni of the Metropolitan Council on Housing. “The best thing you can say is we didn’t lose anything this year.”

Tenant activists campaigned hard to strengthen the laws, staging rallies all over the city, picketing Cuomo’s Manhattan office, and sending busloads of protesters to Albany. On June 13, as 400 demonstrators packed the hallways of the state capitol, 12 people were arrested in a sit-in outside the governor’s office.

One victory that campaign won, they say, was preventing the Legislature from overturning the 2009 state court decision that barred landlords who take tax breaks for renovating rent-stabilized buildings from deregulating apartments in them. That ruling reversed deregulation in Stuyvesant Town/Peter Cooper Village and prevented it for thousands of other apartments. The state Senate, urged on by the real estate lobby, had passed such a bill.

Without the repeal of vacancy decontrol, though, the changes in the law are “not going to stop the hemorrhage of affordable apartments,” says Mary Tek, campaign manager for the Real Rent Reform Campaign, a coalition of housing and community groups.

The state’s rent-stabilization and rent-control laws now protect about 1 million apartments from massive rent increases and evictions without cause. Since 1997, however, about 300,000 apartments have been deregulated. Many of those deregulations were fraudulent, but state enforcement of the laws against illegal rent increases ranges from glacially slow to nonexistent.

Yet the tenant campaign faced long odds in Albany. According to Common Cause, the top 120 real-estate individuals and organizations in the city donated $9.7 million to state and local campaigns in 2009-10, almost twice what they’d given in 2007-08. After the Republicans retook the state Senate last November, Rent Stabilization Association head Joe Strasburg boasted that the landlord lobby had “basically emptied our piggy banks” to win that result—and that they expected a return on their investment. The Senate refused for months to pass anything other than a simple extension of the rent laws.

Gov. Cuomo got $1.3 million of that money. (His Republican opponent got $250.) He promised several times to “strengthen” the laws, but was far less passionate about it than he’s been about reducing state workers’ pensions or raising state-university tuition. He failed to demand that reforming the rent laws be included in the state budget in March, when he would have had more leverage over the Senate Republicans. He never endorsed repealing vacancy decontrol.

“On economic issues, Cuomo’s no different than a Republican,” says Mario Mazzoni. “The cards were really stacked against us.”

If the political environment in Albany is so hostile, than what can the tenant movement do? It needs to be much bigger and more militant, housing activists say.

“The biggest thing is messaging,” says Mary Tek. The movement has to correct the “misconceptions about rent regulation, that it’s a handout, that it’s the state subsidizing tenants. In the middle of an extreme housing crisis, it’s about leveling the playing field and giving tenants rights.” It also, she adds, has to go beyond defending the 2.5 million people who live in rent-regulated apartments and campaign to get all tenants protected.

Helping the Democrats regain control of the Senate is important too, she says, but “we can’t put all our eggs in that basket.”
“We need more of an outside strategy,” says Mazzoni. “We were pursuing primarily an insider strategy, but we’re not on the inside.” That, he says, means “more aggressive protests, not just nudging elected officials.”

The movement also has to engage non-regulated tenants, he says. The real-estate lobby’s strategy, he explains, is “out of the playbook to abolish pensions and destroy unions.” By denying economic rights to people who didn’t already have them, vacancy decontrol has created a class of mostly younger tenants who pay high market-rate rents, who can be manipulated to resent people who pay less.

“The movement needs to include people who aren’t protected,” he says. “We should start calling for expanding rights.”
“Direct action needs to be on the table,” says Andres Mario Mures, an organizer with the Mirabal Sisters community group in West Harlem.

In the Depression, he says, there was a major rent strike in the Bronx. When people were evicted, their neighbors and unemployed councils would either block the eviction or carry their possessions back into the apartment.
The movement also needs to unify across ethnic, language, and class lines, he says, as it’s often perceived as centered among rent-stabilized white tenants in Manhattan. That has improved this year; the Albany protests were conducted in English and Spanish, and some in Queens added Chinese and Bengali.

He doesn’t know how much organizers can do, other than keep working and explaining to people that they can do something.

“People are going to start to feel the pinch,” he says. “When you least expect it, people can become radicalized.”