How long are we Earthlings going to go around walking about as if our planet is not on the verge of climate doom? The answer, for some of us, is no more.

A global movement calling on elected leaders to rise to the occasion of rising floodwaters and to turn up enough heat on multinational energy companies to get them to quit burning fossil fuels struck again on Wednesday with mass civil disobediences from New York to South Australia.

Outside of City Hall in Manhattan, 62 climate demonstrators — part of a growing “extinction rebellion” — were arrested for blocking access to the Brooklyn Bridge.

“We need to declare a climate emergency and take swift action to change the course of human history,” Rev. Chelsea MacMillan told Democracy Now while laying down with dozens of other protesters and blocking midday traffic. 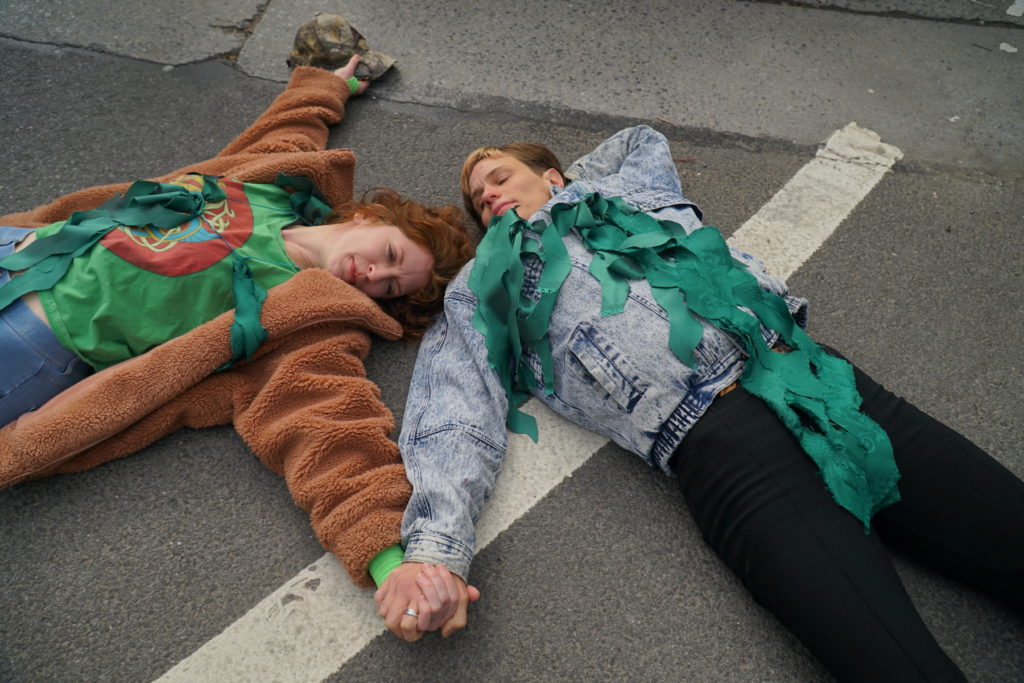 Demonstrators share a moment together as they take part in a “die-in” near the Brooklyn Bridge. Credit: Sue Brisk.

Meanwhile, six demonstrators in Quebec chained themselves to Prime Minister François Legault’s office. Civil disobediences also led to arrests in Germany, France and Sweden. Police forcibly removed nine demonstrators from the state parliament building in Adelaide, Australia after they occupied the chamber for an hour.

In London, where the movement began last summer, more than 400 protesters have been arrested in a series of roadblocks, occupations and sit-ins since Monday that have led to widespread disruptions in Britain’s capital.

As the climate crisis has intensified, what once seemed radical now just seems practical.

U.K. Home Sec. Sajid Javid promised the demonstrators will be met with the “full force of the law,” while Environment Sec. Michael Gove assured protesters “we’ve got the message,” calling the acts of civil disobedience “over the top.”

The global upendings of business-as-usual come on the heels of a recent U.N. report from the Intergovernmental Panel on Climate Change that warned last fall humankind has just 12 years to drastically reduce its output of heat-trapping greenhouse gases or the catastrophic impact of global warming will be irreversible.

As the climate crisis has intensified, what once seemed radical now just seems practical.

In the United States, youth activists with the Sunrise Movement, backed by freshman Congresswoman Alexandria Ocasio-Cortez, are calling for a Green New Deal — a public works program on the scale of past social mobilizations that responded to the Great Depression and World War II, in order to confront the climate crisis and create millions of good-paying jobs.

Here in New York City, City Hall will once again be a site of dissent, as protesters rally Thursday against the Williams Pipeline, a massive, fracked-gas transmission line that will snake through the New York Harbor.

Following a years-long, grassroots campaign led by environmentalists and warnings from its health department, New York State banned hydraulic fracking in 2014. But, activists warn, pipelines like the Williams carrying fracked-gas from out of state continue to pose a threat to people and the climate. The demonstrators are calling on Gov. Andrew Cuomo and the Department of Environmental Conservation to deny the permits necessary for pipeline construction to begin.