I want to express to each of you my deep gratitude for helping to create an unprecedented grassroots political campaign that has had a profound impact in changing our nation.

I want to thank the hundreds of thousands of volunteers who knocked on millions of doors in the freezing winters of Iowa and New Hampshire and in the heat of Nevada and South Carolina — and in states throughout the country.

I want to thank the 2.1 million Americans who have contributed to our campaign and showed the world that we can take on a corrupt campaign finance system and run a major presidential campaign without being dependent upon the wealthy and the powerful. Thank you for your 10 million contributions — averaging $18.50 per donation.

Focusing on a new vision for America is what our campaign has been about and what, in fact, we have accomplished.

I want to thank those who phone banked for our campaign and those of you who came together to send out millions of texts. I want to thank the many hundreds of thousands of Americans who attended our rallies, town meetings and house parties from New York to Los Angeles. Some of these events had over 25,000 people. Some had a few hundred and some had a dozen. But all were important. Let me thank those who made these many events possible.

I want to thank our surrogates, too many to name. I can’t imagine that any candidate has ever been blessed with a stronger and more dedicated group of people who have taken our message to every corner of the country. And I want to thank all those who made music and art an integral part of our campaign.

I want to thank all of you who spoke to your friends and neighbors, posted on social media and worked as hard as you could to make this a better country.

Together, we have transformed American consciousness as to what kind of country we can become, and have taken this country a major step forward in the never-ending struggle for economic justice, social justice, racial justice and environmental justice.

I also want to thank the many hundreds of people on our campaign staff. You were willing to move from one state to another and do all the work that had to be done — no job was too big or too small for you. You rolled up your sleeves and you did it. You embodied the words that are at the core of our movement: Not me, us. And I thank each and every one of you.

We Have Won the Ideological Battle

As many of you will recall Nelson Mandela, one of the great freedom fighters in modern world history, famously said; “It always seems impossible until it is done.” And what he meant by that is that the greatest obstacle to real social change has everything to do with the power of the corporate and political establishment to limit our vision as to what is possible and what we are entitled to as human beings.

If we don’t believe that we are entitled to health care as a human right, we will never achieve universal health care.

If we don’t believe that we are entitled to decent wages and working conditions, millions of us will continue to live in poverty.

If we don’t believe that we are entitled to live in a world that has a clean environment and is not ravaged by climate change, we will continue to see more drought, floods, rising sea levels and an increasingly uninhabitable planet. 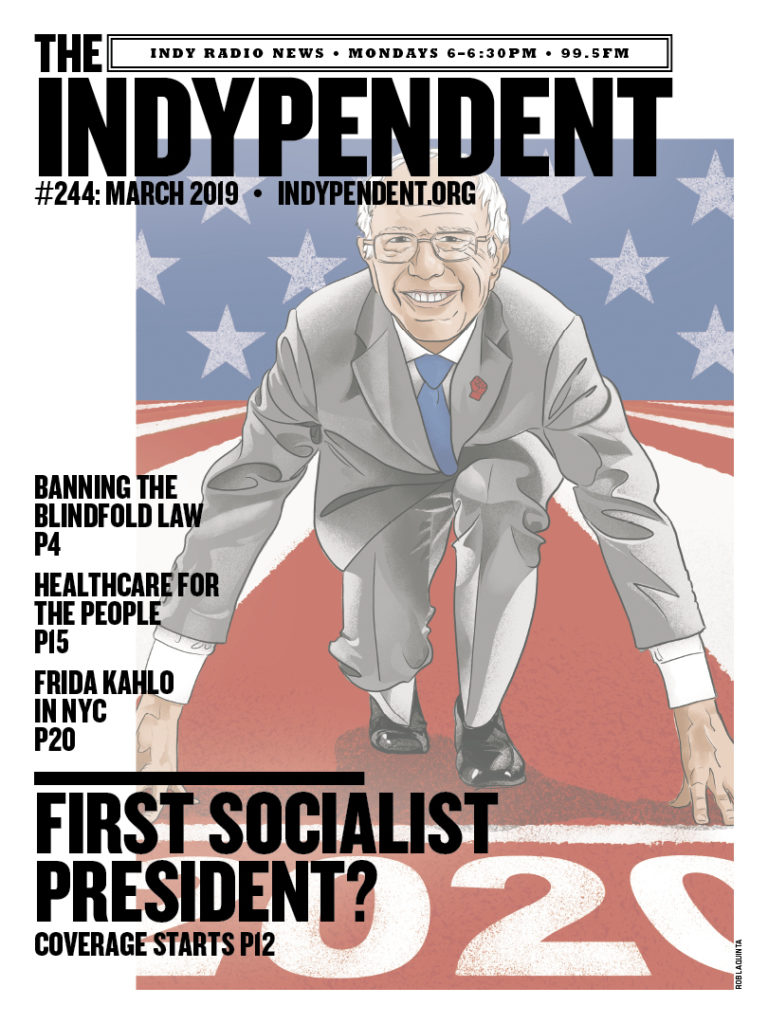 If we don’t believe that we are entitled to live in a world of justice, democracy and fairness — without racism, sexism, homophobia, xenophobia or religious bigotry — we will continue to have massive income and wealth inequality, prejudice and hatred, mass incarceration, terrified immigrants and hundreds of thousands of Americans sleeping out on the streets of the richest country on earth.

Focusing on that new vision for America is what our campaign has been about and what, in fact, we have accomplished. Few would deny that over the course of the past 5 years our movement has won the ideological struggle. In so-called “red” states, and “blue” states and “purple” states, a majority of the American people now understand that we must raise the minimum wage to at least $15 an hour; that we must guarantee health care as a right to all of our people; that we must transform our energy system away from fossil fuel, and that higher education must be available to all, regardless of income.

It was not long ago that people considered these ideas radical and fringe. Today, they are mainstream ideas — and many of them are already being implemented in cities and states across the country. That’s what you accomplished.

In terms of health care, even before the horrific pandemic we are now experiencing, more and more Americans understood that we must move to a Medicare for All, single-payer system. During the primary elections exit polls showed, in state after state, a strong majority of Democratic primary voters supported a single government health insurance program to replace private insurance. That was true even in states where our campaign did not prevail.

And let me just say this: In terms of health care, this horrific crisis that we are now in has exposed how absurd our current employer-based health insurance system is. The current economic downturn we are experiencing has not only led to a massive loss of jobs, but has also resulted in millions of Americans losing their health insurance. While Americans have been told, over and over again, how wonderful our employer-based, private insurance system is, those claims sound very hollow now as a growing number of unemployed workers struggle with how they can afford to go to the doctor, or not go bankrupt with a huge hospital bill. We have always believed that health care must be considered as a human right, not an employee benefit — and we are right.

Please also appreciate that not only are we winning the struggle ideologically, we are also winning it generationally. The future of our country rests with young people and, in state after state, whether we won or whether we lost the Democratic primaries or caucuses, we received a significant majority of the votes, sometimes an overwhelming majority, from people not only 30 or under, but 50 years of age or younger. In other words, the future of this country is with our ideas.

As we are all painfully aware, we now face an unprecedented crisis. Not only are we dealing with the coronavirus pandemic, which has taken the lives of many thousands of our people, we are also dealing with an economic meltdown that has resulted in the loss of millions of jobs.

Today, families all across the country face financial hardship unimaginable only a few months ago. And because of the unacceptable levels of income and wealth distribution in our economy, many of our friends and neighbors have little or no savings and are desperately trying to pay their rent or their mortgage or even to put food on the table. This reality makes it clear to me that Congress must address this unprecedented crisis in an unprecedented way that protects the health and economic wellbeing of the working families of our country, not just powerful special interests. As a member of the Democratic leadership in the United States Senate, and as a senator from Vermont, this is something that I intend to be intensely involved in, and which will require an enormous amount of work.

Where Do We Go From Here

That takes me to the state of our presidential campaign. I wish I could give you better news, but I think you know the truth. And that is that we are now some 300 delegates behind Vice President Biden, and the path toward victory is virtually impossible. So while we are winning the ideological battle, and while we are winning the support of young people and working people throughout the country, I have concluded that this battle for the Democratic nomination will not be successful.

And so today I am announcing the suspension of active campaigning, and congratulate Joe Biden, a very decent man, on his victory.

Please know that I do not make this decision lightly. In fact, it has been a very painful decision. Over the past few weeks Jane and I, in consultation with top staff and many of our prominent supporters, have made an honest assessment of the prospects for victory. If I believed we had a feasible path to the nomination I would certainly continue the campaign. But it’s not there.

I know there may be some in our movement who disagree with this decision, who would like us to fight on to the last ballot cast at the Democratic convention. I understand that position. But as I see the crisis gripping the nation — exacerbated by a president unwilling or unable to provide any kind of credible leadership — and the work that needs to be done to protect people in this most desperate hour, I cannot in good conscience continue to mount a campaign that cannot win and which would interfere with the important work required of all of us in this difficult hour.

But let me say this very emphatically: As you all know, we have never been just a campaign. We are a grassroots multi-racial, multi-generational movement which has always believed that real change never comes from the top on down, but always from the bottom on up. We have taken on Wall Street, the insurance companies, the drug companies, the fossil fuel industry, the military-industrial complex, the prison industrial complex and the greed of the entire corporate elite. That struggle continues. While this campaign is coming to an end, our movement is not.

And, on a practical note, let me also say this: I will stay on the ballot in all remaining states and continue to gather delegates. While Vice President Biden will be the nominee, we should still work to assemble as many delegates as possible at the Democratic convention where we will be able to exert significant influence over the party platform and other functions.

Then, together, standing united, we will go forward to defeat Donald Trump, the most dangerous president in modern American history. And we will fight to elect strong progressives at every level of government — from Congress to the school board.

As I hope all of you know, this race has never been about me. I ran for the presidency because I believed as president I could accelerate and institutionalize the progressive change that we are all building together. And, if we keep organizing and fighting, I have no doubt that our victory is inevitable. While the path may be slower now, we WILL change this country and, with like-minded friends around the globe, the entire world.

On a very personal note, speaking for Jane, myself and our entire family, we will always carry in our hearts the memory of the extraordinary people we have met across the country. We often hear about the beauty of America. And this is an incredibly beautiful country.

But to me the beauty I will remember most is in the faces of the people we have met from one corner of this country to the other. The compassion, love and decency I saw in them makes me so hopeful for our future. It also makes me more determined than ever to work to create a country that reflects those values and lifts up all our people.

Please stay in this fight with me. Let us go forward together. The struggle continues.